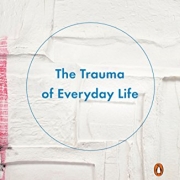 Trauma is everywhere. It spares no one. The constant march of time propels it forward without end. It’s The Trauma of Everyday Life that Buddha spoke of when he used the word dukkha. It’s the suffering that we all face. Mark Epstein in The Trauma of Everyday Life succeeds in helping to explain some fundamentals of our mental worlds as they intersect in Western and Buddhist philosophies.

A man was being followed. Every street he turned onto, this figure followed. He ran, and the figure ran, too – as fast as he did. Every step, the figure followed. As he slowed, so did the figure. It was half an hour before the man realized that he was running from his shadow. That’s the experience that we have in life when we seek to avoid suffering. Wherever we go, suffering and trauma is there. We cannot escape it, because it’s an inescapable part of our lives.

Buddha called it dukkha, which is most typically translated as “suffering,” but the literal meaning is closer to “hard to face.” In Jewish and Christian traditions, it’s described that we live in a fallen world. The brokenness, pain, and suffering we experience are – according to the tradition – a result of the original sin. They’re a part of our existence now.

In Buddhist writings, there is a story of a woman carrying her dead baby and looking for a physician to bring the baby back to life. The Buddha told her to bring back mustard seeds from a family that had never known death. Of course, she couldn’t find any family who hadn’t experienced death. In the process, she realized that she wasn’t alone in her suffering and finally let go of her baby.

Suffering is a universal and unfortunate part of our lives, but we can’t run from it; we must accept it as a truth rather than try to pretend it doesn’t exist.

It’s Not Your Fault

Suffering or tragedy is not your fault. It’s not “ye of little faith” that causes the suffering. You didn’t do anything wrong. Even with Buddha’s belief in karma, he believed that perhaps only one in eight bad things that happen to a person is related to their bad karma. That is even the most consequential view. The good or bad you did that was reflected back to you didn’t necessarily lead – in his opinion – to suffering. Suffering is, as was the first noble truth, simply a part of life.

When you accept that suffering – or “trauma,” the word Mark Epstein uses – is a fundamental part of our world, you can let go of the shame and guilt that you’re receiving suffering as the consequences for your living. You can address only the suffering and not the feelings that the suffering brings up.

The Path Through Suffering

Many people believe that the way to happiness and joy is to avoid suffering. This is like the idea that mental health is the absence of mental illness. (See Flourish.) Both are fallacies. Joy isn’t the absence of pain and suffering. Joy is something else.

In fact, the path to joy isn’t in the opposite direction of suffering – it’s through it. In The Book of Joy, Archbishop Desmond Tutu and The Dalai Lama speak of the path to joy – and to how their joy led them both through struggles. If we stop short of joy at inner peace, we find that it too takes a path through suffering – not around it.

We can’t avoid suffering, we can’t run in fear that we may be hurt. Instead, we walk through it, not minimizing the suffering but acknowledging it as impermanent – only temporary. When we choose to run away from the possibility of suffering, we cheat ourselves out of a whole life and spend our time running from our own shadow, pretending that we can get away from suffering.

A View of Suffering

The pain we feel from something that goes wrong, misses our expectations, or harms us is only the first thing. What is more challenging – and longer lasting – is the harm that we cause ourselves by the perspective we take to the suffering.

Consider a beautiful vase in a store that you see crash to the ground. Though it is bad, you’re likely to not feel much. When the same vase is in your home and it’s a prized possession, because you bought it on your last vacation with your mother before she died, it will likely bring more suffering. The vase itself is the same. The meaning that we assign to it – and the perspective on the loss – is different. It’s that difference that causes the pain.

Another point of view is the old story about two Buddhist monks who had taken a vow to never touch a woman. Seeing a woman struggling and in need of assistance across a river, one carries her to the other side. He continues for the rest of the day with his companion, who finally explodes, “How could you carry that woman? You took a vow.” The first monk responds, “I only carried her across the river; you’ve carried her all day.” In one perspective, the monk was responding to the greater need for compassion than the limitation of his vow, and, in the second, the broken vow was unforgivable.

Suffering is less about the objective pain or discomfort that we feel and more about how we view that pain – as having meaning or being pointless. (For more, see The Hope Circuit.) The way that we process the pain is substantially more important than the pain itself. (See Flourish for the difference between post-traumatic stress disorder and post-traumatic growth.)

Not only is there no condemnation if your mind wanders, there is an expectation that it will wander. Even the most practiced meditators find that their mind wanders from time to time, and they simply lead it back gently and firmly, like you would a child.

One of the things about our breath is that it is constantly changing. Each breath is slightly different from the last, like snowflakes gently drifting down into our consciousness before melting away. All of life is like these snowflakes, which are here for the moment and then gone or changed the next. Our perspective that things are permanent is an illusion.

Scientists typically prefer to picture time as being laid out along a line and that we are simply moving along that line. Everything that will happen has – in essence – already happened. While this challenges our belief in our free will, it helps us visualize impermanence. We don’t expect that our home will exist in the same way that it does forever – or that we’ll even own it. Instead, we can recognize that everything that we feel is permanent really isn’t.

We like to believe that the world is much more cause-and-effect than it really is. We like to forget that there are probabilities in everything. We believe that we’re going to drive to the store safely – even though there is a small chance of an accident. These absolute-isms that things are going to be OK are what allow us to function. (See Change or Die for more on this.) Trauma can take these absolute-isms from us and force us to deal with our world in a more realistic way.

For me, losing my brother to an airplane accident was probably my singularly worst moment. In addition to losing a brother and a friend, I had to confront that even the best pilot and mechanic could have a set of things happen that he couldn’t compensate for. I had to come face to face with knowing that, no matter how good a pilot he was, it wasn’t enough.

The mistaken impression of most is that Buddha transcended emotion. He eradicated it from his life and from the things that burdened his spirit. However, in truth, it’s more accurate to say that he learned how to come to terms with his emotions. He didn’t fear that they would overtake him and run amuck. Nor did he berate himself for negative (or afflictive) thoughts. He learned to simply allow his emotions to pass by as he saw them.

So many people want relief from the pressures of their emotions. The result is they turn to drugs, alcohol, sex, and other maladaptive coping strategies to allow them to numb themselves from their unpleasant emotions. This approach is different than the approach of learning to work with your emotions.

The Problem of Attachment

Buddha was surrounded by those who thought that the path to enlightenment was found through denying oneself and through inducing more suffering. However, as Buddha articulated, life is suffering. There is then no reason to try to add to it. There is enough suffering. Conversely, there were those who believed that there was no reason to suffer, that they should live life to its fullest and be materialistic in their desires. This too, he thought was wrong. Thus, he developed a middle way, which acknowledges life for what it is and still seeks to make it better.

In the middle way, Buddha realized that there is nothing wrong with pleasure. The problems that most people ascribed to pleasure were really problems with attachment to the outcomes, objects, and people that are necessarily impermanent.

Epstein speaks of Buddha’s dreams and how he learned how to accept himself fully. He didn’t trouble himself with second-guessing. He accepted his bad parts – and his good parts – as one integrated person. He isn’t the result of one decision, one thought, or one action. He’s one collective whole. This is a concept that I’ve written about before in my reviews of Rising Strong, Schools Without Failure, Compelled to Control, and Beyond Boundaries. Clearly, it’s a recurring concept and important to me personally. I believe that developing an integrated self-image is key to surviving The Trauma of Everyday Life. What do you think?

Book Review-Advice Not Given: A Guide to Getting Over Yourself
Scroll to top