Book Review-Happiness: A Guide to Developing Life’s Most Important Skill 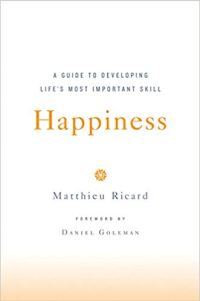 Book Review-Happiness: A Guide to Developing Life’s Most Important Skill

Is happiness a skill? Most folks are looking for happiness – like searching for the lost city of Atlantis or the fountain of youth. However, few people look at happiness as a skill that can be cultivated. However, that’s the central idea behind Happiness: A Guide to Developing Life’s Most Important Skill. Matthieu Ricard is a scientist turned Buddhist scholar who believes that happiness isn’t something that you find, but it’s something that you develop.

Ricard isn’t the only one who believes that happiness comes from changing the patterns of our thoughts. It’s not that our external circumstances don’t matter when it comes to happiness, it’s just that it matters much less than we believe. We’ve heard stories of the lottery winners who, after a short time of happiness, return to their normal sense of happiness – or, rather, being unhappy. While we can’t change the circumstances around us, as much as we might like to, we can change our responses to the circumstances.

It was 2007 when a flight out of LaGuardia was cancelled, causing me to route through Regan National in Washington, DC. I mentioned that experience in my review of Stumbling on Happiness. I’m far from being able to say that I’ve got it all figured out, but, in that post, I share how different responses to a flight being cancelled could lead to anger and frustration or gratitude for the opportunity to read a book about happiness.

It wasn’t the external circumstances that changed – both passengers faced the same problem of a cancelled flight – but the responses are very different.

Rick Hansen in Hardwiring Happiness believes that it’s possible to change the way we think and thereby develop more happiness. It might be more accurate to say that Hansen encourages us to savor the happiness that we do have and remain grateful, so that we can be happier with our everyday life.

What Daniel Gilbert called a psychological immune system (in Stumbling on Happiness), Ricard would call a healthy mind. Instead of resisting the negative circumstances, Ricard encourages us to have our thoughts be healthy all the time. It’s not an antibody that your immune system releases in response to an attack, but is instead a natural part of daily living.

The Illusion of Control

Much of the reason why people aren’t happy is because they believe in the illusion of control. Those people afflicted with depression can apprehend the fact that they have no control more readily than the optimists among us who continue to believe that they have control even when they have none. (See The Hope Circuit for more on this.) The illusion of control helps us cling onto hope even when the chances are very slim. Snyder in The Psychology of Hope explained that there are two components to hope – willpower and waypower. Waypower is basically the belief that you know how to affect change. (Willpower has a more or less classical definition; you can find out more about this in the book titled Willpower.)

The illusion of control may give us hope – but, as Miller explains in Compelled to Control, it’s all too easy for us to believe that we have control of other people. The result is dysfunctional relationships that aren’t helpful in leading us towards happiness.

I read in Building Trust: In Business, Politics, Relationships and Life that many people know what trust is until you ask them to define it. When you do, you’ll invariably hear a definition of trustworthy and not a definition of trust. I believe a similar thing happens when you ask someone to define joy. Rarely would someone respond with a clear definition to this question. Even in The Book of Joy, definitions for joy are hard to come by. What is most frequently shared for joy is something shallower, more incidental, and fickle – pleasure. Pleasure may not have the lasting value that joy has, but it’s much easier to articulate.

Where pleasure is about the moment, joy is about the enduring characteristics of a person or situation. That’s great but how do you develop joy? Ricard explains that joy is the outward expression of the happiness that a person feels inside. It is happiness radiated on to others.

We are quite literally and figuratively the center of our universes. We see everything from our eyes and construct reality through our senses. Our brain is designed to make leaps of inference. (This is the System 1 of Daniel Kahneman’s systems model in Thinking, Fast and Slow.) We’re designed to jump to conclusions. We use everything that we “know” to guide our predictions about what will happen next. The ability for us to predict what will be next is a remarkable feat of evolutionary engineering.

Evolution even equipped us with tools to help us adjust our prediction failures – to refine the efficacy. Jokes, it seems, are designed to test our predictive capacity. Laughter is the response to a failure to correctly predict – at least in a comedy club. (See Inside Jokes for more.) However, the correction mechanisms for our predictive capacity are hampered by the ego’s defenses and our need to be perceived as perfect to the outside world. (See Change or Die for more on our ego defenses.)

If happiness is a skill, then how do we develop it? In other words, how do we construct happiness. The answer is a sort of side-step. I mentioned in my review of The Heretic’s Guide to Management that A Philosopher’s Notes spoke of two Hindu goddesses:

Lakshmi is the traditional Goddess of Wealth. The problem is, if you go straight after her (by constantly chasing the bling) she’ll tend to avoid you. Saraswati’s the Goddess of Knowledge. If you go after her (by pursuing self-knowledge, wisdom and all that goodness), an interesting thing happens. Apparently, Lakshmi’s a jealous Goddess. If she sees you flirting with Saraswati she’ll chase after you.

It turns out that happiness may be naturally attracted to wisdom in the same way that wealth is attracted to knowledge. Happiness has relatively consistently been related positively to age – you’re happier as you get older. There’s a peak in our 70s – when our bodies tend to start failing to a greater degree.

A different way of thinking about this, and the approach that Ricard takes is that if a wise man can be happy, then happiness must be possible. In other words, he solves the belief that happiness – sustained happiness – is unattainable. If there are wise men who were previously not happy but now are, then our ability to reach happiness is a measure of our willingness to pursue the wisdom that leads to it.

Obtaining wisdom is not necessarily a straight path either. However, it is a known path. It’s one that people have pursued for centuries. Hard work and dedicated practice can make anything possible – even wisdom and happiness. (See Peak for more on how to reach the pinnacle of any endeavor.)

From the outside looking in, it appears that people who are happiest have overcome their negative emotions and have controlled their emotions into a channel of only positive experiences. However, this view is not correct – at least for those that I know. It’s more accurate to say that the people who I know who are the happiest are more in touch and in alignment with their emotions. They’re not transcending their emotions as much as they’re accepting and shaping them – what Ricard calls regulating them. Daniel Goleman – who wrote the foreword for Ricard – would likely agree, as this aligns with his beliefs about the development of Emotional Intelligence.

Looking at Jonathan Haidt’s Elephant-Rider-Path model from The Happiness Hypothesis, it’s not that the rider has usurped control from the elephant, rather that the elephant and rider have developed the kind of relationship that the elephant accepts the gentle hand of the rider even when it would have other ideas. That is the person is so integrated in their thoughts and feelings that they play together rather than as separate ideas.

Lisa Feldman Barrett argues in How Emotions Are Made that the separation that we’ve created between emotional areas of the brain and non-emotional areas are fiction and that we find that the neural circuitry that drives our thoughts is interconnected with the circuitry associated with emotion. Ricard notes, “The traditional languages of Buddhism have no word for emotion as such. That may be because according to Buddhism all types of mental activity, including rational thought, are associated with some kind of feeling, be it one of pleasure, pain, or indifference.” In short, our emotions may not be separable from our thoughts.

It’s more accurate to say that those who have happiness haven’t learned to transcend their emotions but rather have come to find a way of accepting them as a part of themselves.

Controlling but Not Repressing

Another way to think about this process is the idea of controlling emotions without repressing them. In the practice of meditation, we learn to accept our feelings and then gently guide our thoughts back to the object of meditation. The same approach is useful with our emotions.

When we gently recognize our emotions without reaction or judgement, we create a space where they can develop completely. Allowing them to develop completely doesn’t mean acting on them, it only means that they’re not shunned, judged, or repressed. Emotions, like thoughts, are subject to the Zeigarnik effect. That is, incomplete thoughts or emotions are given greater weight in our minds. (See The Science of Trust for more on the Zeigarnik effect.) So, repressing an emotion may drive it underground, but it will also strengthen it at the same time.

When we repress emotions, we believe they are shameful or that we shouldn’t be having them. This judgement separates the ability to control our emotions from repressing them. Acceptance is necessary for us to work with our emotions, rather than trying to repress them.

The striking statement “Fifteen percent of Americans report experiencing an intense feeling of loneliness once a week” captures part of the problem with trying to develop happiness. That statement is a scary contrast to the happiness that Ricard is speaking about. In my review of Loneliness, I explained that loneliness has nothing to do with being alone. It’s about feeling alone and disconnected. We cannot completely quiet our yearning to be with other people. It’s wired into our very being. (See Spiritual Evolution for more.) However, curing loneliness isn’t as easy as placing someone in a room full of people. It’s much harder for people to develop the trust necessary to be really seen and understood so that they can be vulnerable and thereby in a real relationship with others. (See Trust => Vulnerability => Intimacy for more on this.)

Accompanying loneliness at the other end of the happiness continuum is depression. It’s clinically recognized and too often medicated. Depression is like trying to fill a tub when the drain is open. It’s like having all the energy sucked out of you. It drains away your happiness. While there are chemical and clinical causes for which treatment is essential, there are also interesting perspectives, including Dr. Glasser’s, who suggests in Choice Theory that we may have more choices to make than we realize even when it comes to depression.

If depression is a choice, then perhaps happiness is a choice too. Perhaps to be happy, we must choose to do the things that we know will lead to happiness. One of those might be to read about Happiness.