Blog
You are here: Home1 / Blog2 / Professional3 / Leadership4 / Book Review-Beyond the Wisdom of Walt: Life Lessons from the Most Magical... 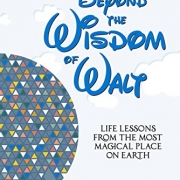 What happens when you step out of Disneyland or Walt Disney World? You take the shuttles, monorail, or boats back to your vehicle… But what then? What happens after you’ve been to a place of magic and you come back to the “real world?” Do you bring a bit of the magic with you to nurture and spread, or do you leave it all behind with the hopes of returning real soon? Jeffrey Barnes’ vision in Beyond The Wisdom of Walt: Life Lessons from the Most Magical Place on Earth is for you to take the magic beyond the parks.

Barnes’ first book, The Wisdom of Walt, explains Walt Disney, his life, and his passions. It explains the man, the movies, and the parks. It highlights for us where the magic was to make it a bit easier to find and a bit easier to understand. Without diminishing the quality of the experience, he shares with us the magician’s tricks so that we can look in wonder at what shaped the story without ruining the illusion. However, Beyond is different. It’s different, because instead of confining the story to the parks, Barnes seeks to help us find a way to integrate the best of Walt and the parks and bring that to our everyday lives.

It’s Kind of Fun to Do the Impossible

“Impossible” is just a word, but it holds so much power for most of us. It’s impossible to write a book or get a patent. Except that it’s not. We know that it’s possible – we just believe it’s impossible for us. The funny thing is that it’s not impossible. It’s just hard. Disney knew that what most people believed was impossible was just hard, and he was always willing to do the hard work.

For me, writing books has become almost passé. I know that writing a book is just like writing a bunch of articles and stringing them together. I know that writing an article is like writing a bunch of summaries on topics and stringing them together. I know that no matter how much you hate writing, you can write a book if you dedicate yourself to it. I once had an English teacher tell me that I should never do anything with writing. To say my writing back then wasn’t good would be very generous. I didn’t use that as a personal mission to become good – it just happened to me naturally as one thing led to another.

Barnes explains in Beyond that The Wisdom of Walt took twenty years and 142 days to write – and the 142 days is all that mattered. 142 days is less than a half a year. What would it be like to have written a book this year? It’s not impossible. It’s just hard.

In The Rise of Superman, Steven Kotler speaks of some of the incredible feats that extreme athletes are able to do. They seem almost super-human. No human could possibly do these things, but they do. And why? Well, there’s a mix of a lot of purposeful practice (see Peak) and a state of mind called flow. (See Flow, Finding Flow, and The Rise of Superman.) What we believed was impossible was – in fact – very possible. If you need something specific, the sub-four-minute mile was considered impossible. Someone who accomplished this would surely die because it was beyond human capacity. When Roger Bannister did it in 1954 – nine years after a slightly over four-minute mile run by another gentleman who maintained the record – he only got to enjoy the glory of being the fastest man for two months before someone else bested his time.

Had you asked me five years ago if I’d ever get a patent, I’d have told you it was impossible. I didn’t have any particularly deep knowledge of chemistry, mechanics, molecular engineering, or any of the other skills that I thought would warrant the issuance of a patent. However, together with my wife we devised a way to make it easier for patients to be safer in the hospital by some changes to the humble dressing that protects from infections. Three years later – yes, three years – we’ve got a patent. It was impossible – right up to the point where it wasn’t.

Walking down Main Street, U.S.A., there are two competing thoughts. The first is, this isn’t real. It isn’t like any real place you’ve ever been – and at the same time, it harkens back to a time that we all wish was real. This thought is interrupted by the realization that, though it may be, in some ways, a front, it is also objectively real. You can see it, smell it, touch it. It must therefore be real – whatever that means.

It’s difficult to accept that Disney created lands and worlds, but we know that he did. We know that he shaped his reality around his dreams and visions. So why can’t we create our realities? I’m not suggesting that we create our own theme parks, but aren’t there small ways that you can create your reality today?

I can hear the voice inside your head (because I think it got there by way of mine) that says: “But you’re not Walt Disney.” That’s right. You didn’t go bankrupt. You didn’t have a father that never understood your art or what you were doing. You, in fact, may be more likely to succeed at creating your reality than he was.

I should be careful to add that Disney didn’t make wild, unfounded bets. He made small attempts and then progressively larger ones. He didn’t start with Snow White (his first full length animated film). He started with animated shorts and perfected the skills necessary to move to the next level. The opportunity to create (or shape) your reality isn’t a license for recklessness. It’s a license to move forward.

Barnes explains that he’s descended from General George Pickett, who led the disastrous charge at Gettysburg. His wife, Niki, is the voice of reason that helps him make slow and steady progress instead of wild charges into the unknown. That steadying force is important. Whether internally motivated or externally provided, we all need someone who can temper and help us to regulate the passion to move forward and the persistence to move through barriers.

It’s in the way. The thing that I want is on the other side of this barrier. Getting past it seems like a frustration, a waste of time, or just plain depressing. However, sometimes the barriers are exactly what we need to develop our character in ways that allow us to reach our dreams and shape our realities.

I’m reminded that if you “help” newly-hatched sea turtles get to the ocean, you condemn them to death. They need the struggle to find their way to calibrate their sense of direction. Chicks will die if you “help” free them from their egg shell. While no one likes struggle, it’s the struggle that makes us who and what we are – and we’re better for it.

Disneyland exists, because Burbank didn’t want the carnival atmosphere they expected from Disney’s plan for a Mickey Mouse Park. The Seven Seas Lagoon exists, because the geology wouldn’t support a parking lot that was planned for the location. Instead of pictures with a sea of cars in front of the park, we have pictures with an actual, beautiful, sea in front of the park. Barriers sometimes stop you from the easy and ordinary and force you into doing something extraordinary, something worthwhile.

Simon Sinek implores leaders to Start with Why when leading others. It’s the “why” that is the purpose. Strangely, it was a quote from Jack Lindquist that made Disney’s mission make sense to me. “We are not a cure for cancer, we are not going to save the world, but if we can make people happy for a few hours for a day, then we are doing something worthwhile.” The key was that something worthwhile.

Barnes relates the story of Walt’s father (Elias) coming to see his brand new studios. Unable to help his father understand the practicality of the studio, he finally described it in terms of how it could be used for a hospital. To Walt’s dad, his drawings and his movies weren’t “practical.” Practical was a proxy for “useful.” Elias’ question seemed to be whether or not what Walt was doing was contributing to the world. While Walt spent the entire tour speaking as if the studio could be a hospital, he was telling a story that his dad could hear and understand. As the master storyteller, one couldn’t expect much else, but Elias missed the point. He missed the point not just of the studio but of his son’s legacy.

It isn’t that the Disney brothers cured cancer. However, they did change the course of human evolution. They’ve helped millions of Americans see a world that encourages us to be the best that we can be. Malcolm Gladwell in The Tipping Point explains the power of small things that make a big difference. The streets are clean. The “cast” are friendly. The world seems just a bit safer – a bit better – inside the parks. For a moment, Guests (Disney reportedly insisted that the word “guests” was always written with a capital G) can believe in a world that’s a little bit brighter and a little bit better than it actually is.

Gandhi said, “Be the change you want to see in the world.” For Walt and Roy, the change was to make the world a bit happier, and hopefully their desire for happiness could spread.

It’s easy to think that the theme parks work on magic. However, the sobering truth is, as Lee Cockerell says, “It’s not the magic that makes it work; it’s the way we work that makes it magic.” Even today, operating the parks is hard work. Creating them was hard work. All the magic comes from hard work.

Walt Disney went bankrupt. He lost his first major character to Universal. He fought and struggled. He worked hard to make his visions a reality. From animated shorts to full-length films, he fought for what he believed in. A little-known fact is that most of Disney’s movies lost money on their first run in the theatres. However, he didn’t stop.

The project that became the 27,000 acres of Walt Disney World were a reality that Disney himself never got to see. He died six months before groundbreaking. Unlike other projects that Disney waited to see, this one he had run out of time for. His smoking habit had finally caught up with him. However, while he was living, he waited until his team had developed the skills to do feature length films. He waited to build Walt Disney World until he felt the timing was right. In the end, his brother and his team completed his vision for a theme park on the east coast.

The combination of hard work, patience, and perseverance is what built the experience we know today. The question for all of us is how are we going to use these same qualities to go Beyond the Wisdom of Walt?