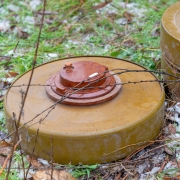 I have never been in a literal mine field, and I’m not anxious to explore the opportunity. However, like all humans, I feel like sometimes I’m wandering around a field of emotional landmines. I can’t predict what will set someone else off – or what I can do about it. The truth is that others have the same experience with me. A well-intended comment can set me off if it touches a landmine from my past.

Landmines of the Past

Landmines are leftovers from long-forgotten hurts. It’s the time that you got yelled at, belittled, or felt shame. Those things, while buried underneath the usual pleasantries, are there just waiting to be stepped on, so that they can be unleashed.

We can, sometimes, diffuse or partially diffuse these situations. I know, for instance, that I react very negatively to stonewalling. (See The Science of Trust for more on what stonewalling is.) I react when people suggest that others need to be on anti-depressants for the rest of their lives. (See Choice Theory for more of my views on this.) Both examples are despite a great deal of work and earnest attempts to mitigate the response.

I’ve addressed the obvious ways that these reactions surface. It’s not like I don’t know I’m sensitized to stonewalling. It’s that I don’t realize situations that will set off a reaction. Our children being coy about what they’re doing or who they’re going out with can set it off – though not so much anymore. It seems like every few months there’s a new dimension of hurt that I didn’t quite address.

Flags on the Landmines

The first step to preventing an explosion in yourself is to know clearly where the landmines are. Clearly, I’ve managed to locate a few of mine. I know, at least to some degree, what some of my landmines are. Discovering your emotional landmines isn’t easy, but it does require some honest assessment of your previous responses. The easiest way to find landmines is by looking at the craters that they create.

When was the last time you flew off the handle or lost control? Those are your clues for where the landmines may be. The more challenging step is trying to identify what in the situation set you off. We’ve all been told we’re stupid – but what about that situation was different? We’ve all been subjected to unrealistic expectations, but why did this circumstance cause you to blow your stack?

To find the exact location of the landmine – so we can mark it and be careful about avoiding it – we must move from the generic to the specific. We’ve got to find similar situations where we didn’t get triggered. The funny thing about emotional landmines is that they generally have a very narrow exposure pattern. It takes something very similar to the original hurt to set them off. If you feel like you’re getting triggered by many things, then perhaps you’re not dealing with one emotional landmine but several.

To find the key characteristics that triggered us and separate them from those that aren’t important, we have to recognize the distorting influence that our willpower can have. It’s quite possible that you were fuming underneath your breath because you were triggered by something, but at that particular moment, your willpower was high, and therefore your ability to control yourself was more than enough. While it’s great that you maintained your cool, it’s important to recognize that you won’t always have a high degree of willpower.

Willpower is an exhaustible – and replenishable – resource. You’ll naturally have more sometimes and less others. In our quest to find triggers, we can’t ignore that sometimes someone will step on an emotional landmine, and you’ll contain it with your willpower. Other times, even getting near the landmine will set it off, because you have precious little willpower left. (See Willpower for more.)

You can’t eliminate yourself and your level of willpower when trying to differentiate between the times when you were triggered and lost it and those where you did not. It’s entirely possible that the only difference was willpower – and you can’t always depend on willpower.

The beautiful thing about identifying landmines specifically is that you can sometimes go back and work through the hurt that created the landmine in the first place. If you’re sensitive to stonewalling – like I am – you can work on revisiting the situations that created this sensitivity and recharacterizing them or seeking to better understand them.

Albert Bandura became famous with his work to desensitize patients of their phobias. (See Moral Disengagement for more of his work.) He’d take someone with a paralyzing fear and progressively move them through greater and greater degrees of safe exposure to the thing that they were afraid of. We can use the same approach with our emotional landmines. We find safe ways to explore the space that would historically set us off.

The difficult part is to understand how to be safe as we’re dealing with sensitive issues. Often, we find ourselves reliving parts of our lives where we were vulnerable, and people took advantage of us. We find ourselves temporarily trapped in our former selves. This can be a scary experience. However, the truth is that we know we’ll make it out of the situation – because we already have.

Safety, we find, is a perception. It’s not reality. We feel safe driving our cars and unsafe on an airplane, but statistically speaking, our car is a substantially riskier activity. As we’re dealing with landmines, we want to place ourselves in circumstances and surroundings that are most likely to create the perception of safety. It’s the safety that will allow us to get closer to the original fear or hurt that created the landmine, so we can remove it.

While we may not be able to anticipate others’ landmines, we can create safety for them, so that they can have a greater chance of dealing with their landmines – and prevent us from getting caught up in it.

Available Now: Communications Tips for Everyone