Blog
You are here: Home1 / Blog2 / Book Review3 / Book Review-How Dogs Love Us: A Neuroscientist and His Adopted Dog Decode... 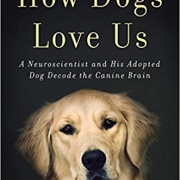 It’s no secret that I love dogs. I’ve spent most of my adult life with one or more canine companions. For the last 13 years, I’ve owned my own company, and the dogs have their own airlock doggie door system to get into the office. My love for our dogs and the dogs of our friends isn’t a secret. However, Gregory Berns was able to answer a different question. Do dogs love us? How Dogs Love Us: A Neuroscientist and His Adopted Dog Decode the Canine Brain walks us through the journey that Berns walked to answer that question.

Before one can embark on a journey to discover if dogs love us back, one first must understand what love is. Or, at least, one must decide what will settle for love, since poets, philosophers, psychologists, and neurologists have been trying to answer this question. Rather than create a large definition of love with its many facets and complications, one of the researchers on the team summed it up with “Love? I’d settle for codependence.” Though, in human relations, codependence has developed a bad rap, it’s a reasonable way to approximate the relationship with dogs.

I decided to look back at the book reviews and posts that I’ve written that included the word “love” in the title or subtitle. The books that jumped to the top were The Art of Loving, The Road Less Traveled, Daring Greatly, and Love, Acceptance, and Forgiveness. The post Faith, Hope, and Love also surfaced prominently. In the end, the perspective that seemed to be the most relevant was that love is a choice. It’s a decision to sacrifice your needs and desires for the needs and desires of someone else. That’s what dogs seem to do when you ask them to stop chasing a squirrel to return to you – however, do they do this out of fear for the repercussions or based on their true desire to please you? That’s an interesting question that Berns tries to answer.

Dogs have been used in research for a long time. Famously, Ivan Pavlov did research with dogs to learn that he could condition the dogs to salivate when a bell rang. He, according to Berns, however, didn’t have an affinity for dogs, they were just a part of the research. To figure out how dogs loved us, it would require a different approach. Instead of being objects used for the purposes of research, they would be active participants.

To figure out if dogs love us, the plan was to scan the dog’s brain with a fMRI. This creates an image of what is happening inside a brain by creating an electromagnetic field and then measuring the minute changes in this field that are created by the mind of the person – or, in this case, dog – inside the machine. The machine itself is very sensitive and only works if the subject is positioned correctly and remains completely still. Even for humans, this can be challenging. The machine is loud, and, for many people, it can trigger claustrophobia. Training a dog to go inside of the machine and stay still for the required period of time would prove to be challenging.

The machine itself was calibrated for humans, and a dog’s brain is different. Even getting the machine to process a canine brain was a hidden challenge that needed to be solved – but not until the dog could be trained to get in the machine.

The training of the two dogs used for the initial test proceeded like normal dog training might, using praise, treats, and a clicker. The clicker is just a tool to help the dog know they’ve done something that the owner wants immediately. The dog learns that the click means a treat, so the trainer can signal when the exact behavior desired has been accomplished.

The fMRI machine had two key components that had to be conquered. The first is the tube that sometimes triggers claustrophobia in people, and the second was the “birdcage” where the head goes. As it turns out, dogs have little concern about running through tunnels, so that was the easy part. The difficult part turned out to be getting the dog to place their head in the birdcage in the same place reliably.

After making some molds that shaped to the dog’s head so that they laid their head down in the exact same spot, things became easier, but not before more than a few fMRI images didn’t turn out so well.

Having gotten the dogs trained well enough to get a consistent location, the images of the canine brain were forthcoming. However, no one had built the kind of comprehensive map for dogs that exists for the human brain. It was necessary to make some guesses about where things were – and to address the elephant in the middle of the brain. Or, rather, to recognize that the olfactory bulb in dogs was substantially larger than in human brains. That makes sense, given that dogs’ noses are substantially more sensitive, but it does mean that there wasn’t a one-to-one correspondence between a human brain map and a canine map.

Still, with some work, the general areas became apparent, and a picture emerged. The picture first showed that dogs had mirror neurons.

We’ve known about mirror neurons since the work in the 1980s and 1990s with macaque monkeys. The monkey’s neurons would fire whether performing an action or watching the action be performed – even when the object of their observation wasn’t of the same species. In other words, they fired whether they were looking at a monkey doing the action or a human. The implications are profound. At some level, watching another animal perform an action causes you to think like they do.

Since the initial research, the awareness of mirror neurons has expanded to encompass mental rehearsal of actions as well as observations of others. Mirror neurons are believed to be at the heart of our ability to simulate what is in other’s minds. This is called theory of mind, and it’s the subject of the book Mindreading. The upshot of what Berns and his colleagues saw was that dogs had theory of mind for the humans that were giving them instructions.

Much about what people think about how to train dogs and relate to them comes from the study of wolves – called lupomorphism. The idea is that dogs and wolves are essentially the same animal separated by a bit of selective breeding. The models for how we came to adopt dogs as our constant companions isn’t clear. Cave paintings don’t show dogs helping us to hunt (apparently the picture of a dog with a duck in its mouth wasn’t painted on any walls they could find). Conversely, it’s unlikely that a wolf could have lived off the scraps that friendly humans might have provided as enticement for them to stay. If they’re not helping in the hunt, it’s unlikely that it would make sense for humans, who struggled for survival, to part with the precious food they needed. The result is an unclear picture of how our relationship with our canine companions really came to be.

However we came together, the prevailing thought is that dogs treat us like pack members. That is, we’re just a part of their pack, and they make no distinction between the humans in their world and other dogs. However, Berns et al.’s research showed something different. When exposed to the scent of dogs they knew and dogs they didn’t plus humans they knew and humans they didn’t, the pattern of neuron firing was different – very different. While the dogs showed they could recognize the difference between familiar and unfamiliar, they made a distinction between the people they knew and the dogs they knew.

Something special is happening in the mind of the dog that’s reserved just for people and speaking personally I know there’s some sort of special affinity for dogs – even if I can’t explain exactly why.

But What About Love?

It depends upon what you mean when you say love. The patterns were certainly there, that they knew what their masters wanted, and they desired to please them. The dogs were reading their masters with a level of interspecies theory of mind that no other animal has yet been discovered to possess. So, in the best approximation for a philosophical question that science can muster, the answer seems to be yes. Of course, you’ll have to make your own decision about How Dogs Love Us. For my part, I don’t need much evidence that my dogs love me – I don’t care if a scanner shows it or not. I can see it in their eyes – and they can see it in mine.