Blog
You are here: Home1 / Blog2 / Professional3 / Diversity and Inclusion Start with Acceptance and Appreciation 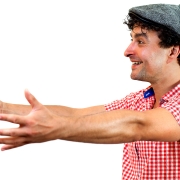 I was standing along the back wall with my thoughts on the session that I’d be giving in a little more than an hour when a friend of mine, Sue, walked up and asked if I’d join the panel that was about to start. She explained that the moderator was working on a microphone for me in the anticipation that I’d say yes. I looked to my left and saw the moderator and friend of mine, Heather, speaking to the technical staff. I answered Sue that I’d be happy to help. In truth, I was wondering what value I could offer. It was a diversity and inclusion panel and I felt like the “token old white guy.”

As I took my place on the stage, I recognized the wisdom in her words. It wasn’t the first time she’d done panels like this. I’d been in the audience more than a few times at these panels when someone wanted a place to express their frustration, and it was all the moderator and panelists could do to keep the conversation from devolving. As the session started, I held back the desire to identify myself as the token white guy and introduced myself as a man who had daughters who have a contribution to make to the world.

I realized that, at some level, my presence was enough to help keep things from going off the rails; but, ever the engager, Heather made sure that some of the questions ended up on my lap. I’m rarely shy about answering any question, even with “I don’t know,” but this was different. The panelists were my friends. They were sharing how they’d felt held back in their careers and how the audience members could cope with the similar situations they were clearly facing.

Then, there it was, hanging in the air: “What can we do to change the culture?” The implied statement was that just talking about diversity and inclusion wasn’t enough. Things weren’t changing, and they weren’t getting better. The answer that thankfully flowed, as Heather lobbed the question my way, was simple.

Acceptance is the first answer to how we resolve the diversity and inclusion problem. I call it a “problem” because it is one. In technology, there are not enough women. In nursing, there are not enough men and, to some degree, not enough persons of non-Western, European descent. In both cases, it’s about accepting other people and making them feel like, well, people.

As I blurted out my answer, I knew I had to explain. Too few people had read David Richo’s How to Be an Adult in Relationships – and it’s not the sort of book title you can tell people to read without them becoming instantly offended. Richo explains in the book that everyone needs five As: attention, acceptance, appreciation, affection, and allowing. Admittedly, it’s not a business book. It’s a book about being your whole self, so not everything applies to a business setting. However, the idea of accepting does.

Acceptance is a recognition that you don’t get to control the world, and your view of the world may be wrong. (See Compelled to Control for more on control and Incognito for more on perspective.) When you accept other people for who they, are even when their experiences and perspectives aren’t yours, you open the door for diversity and inclusion.

Diversity of thought makes a huge difference in the outcomes you can get. The Difference explains the dynamics of how this works and why it’s important. It’s not just about limiting “group think” but is instead an expansive concept that creates value and opportunity if you’re willing to listen.

If you’re willing to accept people, you can begin to become aware of the value that they can bring in perspective, in experience, and in just being a fellow member of the human race.

My wife sometimes claims that I’m oblivious. Thankfully, she doesn’t claim it as often as we both didfor our boys when they were teenagers. However, there are times when I don’t pay attention. In most areas of my life, this isn’t a benefit; but in one area, it is very valuable.

I’ll be trying to explain how she knows a colleague of mine. I’ll describe what they’ll look like when she meets them at some conference or event. Or, rather, I’ll try to describe them. I generally do a lousy job. I’ll start by talking about how smart they are or how their view is really interesting before getting the look, which explains you can’t identify someone by looks if you’re talking about how witty their comments are. I often realize that I struggle to articulate how she’ll be able to know how to figure out who I’m headed towards for an introduction.

Sure, I can get tall or short and thin or “big boned,” but when it comes to ethnicity, I fail. I’ve quite literally, and somewhat embarrassingly, had a friend explain that he had been discriminated against as an African-American. The embarrassing part was that, to me, he was just a friend. I hadn’t given his ethnicity a second thought. We had known each other for more than a dozen years at that point. It was an awkward moment that eventually passed but one that made me recognize that I truly don’t see ethnicity differences.

I also don’t see men and women differently from the perspective of what they can deliver, and that can get me into trouble if I’m not careful.

Whether you’re Christian or not, what Willow Creek Church (based in Barrington, IL) has done is impressive. Bill Hybels grew the church into one with massive attendance and respect across the globe for their mission. He, with others, created the Global Leadership Summit, where business and ministry leaders could come together to inspire leaders to be better than they currently are – whether they’re Christians or not. And then, as he was winding down his impressive contributions to society, scandal struck.

The board had investigated some claims by women and found them to be not credible – at least not to the extent they had claimed. While traveling overseas, Bill had invited a woman to his hotel room to work on some ministry planning, and it had made her uncomfortable. Bill, by most reports, had not at the time considered that she would be uncomfortable, and I believe he truly had no malintent. (I recognize that this is convenient when I don’t know Bill personally and am not directly involved.) When you see people only as valuable colleagues, team members, and contributors, you don’t always see where their fears may lie.

The press got the story, because the woman didn’t feel as if her concerns were heard by the church board In the end, Bill stepped down, both from the church he loved as well as the Global Leadership Summit that he had shaped for so many years.

For me, it’s a reminder that sometimes being oblivious to the differences isn’t safe. Sometimes, I must pay more attention not to minimize, limit, or constrain the contributions of my colleagues but instead recognize that, just like me, they have fears and concerns – and they’re not the same as mine. Luckily, my wife nudges me into awareness that not everyone sees the world the same way I do.

I’m proud to be from Indiana. We do a lot of things right in the state – and more than a few that are wrong. I appreciate that Mike Pence can be vice president, and I applaud his commitment to his values in a career as a politician that makes it all too easy to bend to the public opinion.

Pence has drawn some criticisms from the remarks that he won’t dine alone with a woman who is not his wife. Some call this sexist and believe that it represents prejudice. I see it a bit differently. I see it as respect for his wife and protecting something that is for them alone. While I wouldn’t draw the line here, I respect and appreciate his right to do so.

More importantly, I see this as the opposite end of the awareness and concern spectrum as Bill Hybels. Where Bill in his belief in humanity didn’t worry much about improper appearances or accusations, Mike is more concerned. In my opinion, it doesn’t make either man wrong. It makes them human. They get to decide how much they trust others and how that trust is borne. Each man accepts people in their diversity, they just guard themselves differently. However, as I was sitting on the stage, I realized that acceptance wasn’t enough.

It’s one thing to have sympathy for someone and a different thing entirely to have empathy. Sympathy acknowledges where someone else is – but separates you from them. Sympathy says: “It sucks to be you.” Empathy says: “I understand this about you.” Empathy brings people closer, where sympathy pushes people away. Acceptance without appreciation is like sympathy in that it doesn’t bring them closer.

The missing component is another of Richo’s As: appreciation. While we must start with acceptance, because you can’t appreciate something you can’t accept, stopping there isn’t the whole picture. You must recognize that each person brings a unique and precious value to the world and the situation you find yourself in.

I’m not good with details, and while it may be frustrating to have them pointed out by our office manager, I recognize that I’m the one with the problem, and it’s a problem that she helps me work around. Her value in that situation is helping me see where I will get harmed if I’m unwilling to pay attention and resolve those pesky details.

I’m learning to be better to accept the feedback that I’m missing something and appreciate the person raising the issue – no matter who they are or what position they are in the organization.

Getting Off the Stage

As I was getting off the stage, I realized that we can’t teach diversity and inclusion directly any more than we can teach people how to be wealthy. We must teach people to be wise, and wealth will come. If want to develop a culture of diversity and inclusion, we can’t sit or stand on stage and extol the values of the diverse organization. To get to the culture we want – and need – we’ve got to start by working on the fundamentals of accepting everyone else and then move on to developing a deep appreciation for every human being.

I don’t know what the audience got from the panel, but I got a clarity that I get to carry with me.