Blog
You are here: Home1 / Blog2 / Professional3 / 16 Microsoft MVP Awards, what it Means 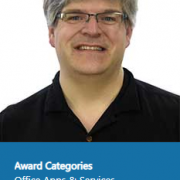 It was 2004 when I first got an email asking me to answer some questions because I was being considered for an MVP award. I asked a friend, Jason Dunn, about it, because I knew he was an MVP. His response was enthusiastic. I was honored later that year to get my first award for Windows Networking. Shortly after that, they split the category into client and server, so I was converted to Windows Networking – Server. Then, for a while, I was a Commerce Server MVP. Eventually, I was awarded for SharePoint – and now Office Apps and Services.

I was just honored yesterday, as were many of my friends, with another yearly award. Though my initial award was October of 2004, they resynchronized everyone to July renewals a few years back, so everyone’s award (or non-award) comes the same day. Therefore, yesterday, there were a flurry of posts about renewals. I’m happy for my friends, but it occurred to me that most folks don’t know what being an MVP means and why it’s important for so many of us.

What is an MVP?

Technically, it’s “Most Valuable Professional.” It generally means someone who’s being recognized for how they support the community around a Microsoft product or service. It’s an annual award, not the result of a test or a class. It’s recognition for how you serve the community with your knowledge, time, and compassion.

There are some Microsoft-provided benefits to the awardees. That’s true, and they’re greatly appreciated. However, the benefits aren’t really about the official benefits. The real benefits are in the conversations you have with Microsoft employees. MVPs get the opportunity to speak with product teams and relay what we’re seeing in the market to the people who are making the products.

There are some truly gifted people creating products for Microsoft, but the problem is they don’t get to see the entire market. My favorite question to hear the Microsoft product team ask is, “Why would anyone want to do that?” It’s my clue that I’m exposing a scenario the product team has not considered before. They don’t always implement what’s needed to do the scenario, but they often do. Either way, I get to know that I did my part to make the products better for everyone.

While I deeply respect the product teams, the smartest people I know are my fellow MVPs. Whether they share my award category or not, they’re amazing people with intelligence, passion, and compassion. I’ve reached out to MVPs I didn’t know for help, and, by the sheer nature of the fact that we were fellow MVPs, they helped me – and I’m extremely grateful for that.

I posted in The Deep Water of Affinity Groups just how powerful it can be to be a part of a group. There’s an emotional connection and a trust in being a part of a group of folks that you know care about the community and each other.

But I’m on the Outside

One of the truly amazing things about MVPs as a general statement is that most are willing to help anyone. That’s how they got their award: their desire to help. Whether you’re an MVP or not, most will find some time for you and will try to solve your problem. So, while I’m honored to have a special priority with the other MVPs by the nature of the award, the award itself means that you’re a part of the community – because that’s why MVPs are awarded.

Over the years, I’ve seen many MVPs not get re-awarded. Their lives and jobs took them in other directions. Maybe they started being passionate about other technologies, or they became less focused on technology all together. Microsoft has started reaching out and recognizing that former MVPs and current MVPs have so much in common – even if Microsoft can’t support the alumni getting the award again, they can keep them in the non-sensitive conversations.

I know that one day, I’ll fall into the alumni category. I don’t look forward to that day. I am, however, grateful to be in the company of so many great men and women and am comforted by knowing that, even when I don’t get re-awarded, I won’t lose the friends I’ve made through the program. They’ve enriched my life.

Book Review-Braving the Wilderness: The Quest for True Belonging and the Courage...