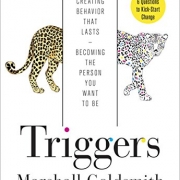 Behavior change is hard. In Triggers: Creating Behavior that Lasts – Becoming the Person You Want to Be, Marshal Goldsmith and Mark Reiter explain that it may be the hardest thing that any adult does. Goldsmith is no stranger to motivating readers and audiences to change. His previous work was What Got You Here Won’t Get You There. He’s not alone in this space, as dozens of other authors are trying to help you learn what it takes to change.

Before delving into Triggers, it’s important to quickly highlight other works that intentionally try to change the behavior of individuals. (I’ll avoid those that are trying to change a specific habit.)

And those are just the selection of books I’ve read that are “directly related” to changing who you are. The point here is that it’s an area of intense attention. It’s so difficult to change that there are many who are trying to find the magic elixir to make it easy – or at least easier.

It doesn’t matter where you start on your journey of self-change. However, according to Goldsmith, you may want to start with the trigger.

Goldsmith defines a trigger as “any stimulus that reshapes our thoughts and actions.” The meaning here includes an inflection moment someone can use to change their behaviors and what most others mean when they say “trigger” which is something that triggers emotions.

In recovery circles, triggers are the start of the sequence for a preprogramed response. Triggers are dangerous, because they can lead the addict towards their addictive behavior. Charles Duhigg in The Power of Habit refers to “trigger” in the same way when he defines it as a synonym of his word “cue,” as it begins his cycle of cue, routine, and reward.

The problem that I have with Goldsmith’s definition is that it can be literally anything. The definition is so broad that it doesn’t distinguish between the triggers that kick off the preprogrammed response and those triggers that cause you to evaluate your life choices and potentially make a big change. The former need to be monitored for so that we can elevate our conscious control, as Goldsmith advocates. The latter need to be cultivated, so we can find the learnings inherent in life that can help us make better choices. Despite the shaky start, there’s real value in understanding Triggers.

I’ll Be Happy When

Goldsmith calls “I’ll be happy when” the great Western disease. Finding – and maintaining – happiness has been an aspiration for Americans since the Declaration of Independence. (Happiness wasn’t considered something ordinary folks could hope for before then.) Daniel Gilbert in Stumbling on Happiness makes it clear that we’re very bad at predicting our future happiness though we’re constantly striving to do so.

At some level, deferring things into the future does allow us to get better results. We owe much of our success as a human species to our capacity to develop agriculture – which required delaying our gratification (if not happiness). We had to plan the seeds and tend them with the expectation that we’d get much more food in the end than spending our time foraging and hunting. This led to a caloric surplus that freed us from the confines of subsistence existence.

While we may not be accepting happiness when it comes as readily as we should, we can’t condemn the idea that making investments for the future is bad.

Kurt Lewin said that our behavior was a function of both person and environment. He helped us understand the powerful and unpredictable influence that our environment can have on us. Consider that the research for the Drug Abuse Resistance Education (DARE), which was designed to prevent drug abuse, actually encouraged it in some cases. Instead of scaring students with stories of horror, it normalized the conversation and made drugs a real part of their environment – in ways that it wasn’t before. (See Chasing the Scream and The Globalization of Addiction for more on drugs.)

Goldsmith explains that we like to believe we have control, and the environment doesn’t impact or even influence us. However, this runs counter to what we know about how things work. (For more about our desire to control, see Compelled to Control. For more on our need to feel like we have control, or some measure of control, see The Hope Circuit.)

Fate deals us our cards. Choice is how we play them. We exist in an environment that shapes us and sometimes limits our choices – but it almost always leaves us some choices. We can’t change the cards we’re dealt in this hand of life – but we can continue to play our cards well until a better set comes along.

Too often, people bemoan the fact that they didn’t get what they wanted. They focus on how they’ve been wronged or how they deserve a house in victimhood because of what has happened to them. In effect, they’re focused on what fate has done to them. They’re focused on something that cannot be changed. That isn’t to say that there’s not grace in acknowledging one’s fate or admitting that it sucks. However, when we focus too much of our energy on things we can’t change, we waste the energy we need to change the things that we can.

The Distance Between Trigger and Behavior

A small son being scolded by his mother for hitting his sister responds with, “She made me do it,” not realizing that this doesn’t make sense. Adults make similar statements when they say, “What choice did I have?” as a part of an excuse for a bad behavior. “I couldn’t let them get away with that. What choice did I have?” (See The Evolution of Cooperation for more on the need to prevent bad behaviors in others – however, the point here is not the other’s bad behavior but ours.)

The psychological school of behaviorism is all but dead. We realize now that there’s more going on than the behaviors that people exhibit. We acknowledge that there’s a gap between the stimulus and the response, and this gap is filled with the way that we process the stimulus. There are some responses that are reflexive, like the kick that happens when a doctor hits your knee with a rubber mallet. However, for the most part, our responses are mediated by our thoughts.

To choose more effective behaviors – to have a choice – we need to first be able to identify the stimulus when it occurs. The ability to apprehend our thoughts gives us the capacity to make a choice. If we can’t become aware of what is happening to us, we have no hope of changing our choices.

Knowing that we have a choice and that we, as humans, have the capacity to make choices about how we respond, often slowly unlocks our capacity to make choices. After this awareness, we may only recognize one in ten or one in a hundred situations where a stimulus triggers an automatic response. However, if we focus attention on this moment, we can begin to change the ratio to where we find nine out of ten times that we’re being triggered.

Even after we’ve identified the stimulus, we must learn how to change our choices. At first, that can be challenging, because the pull to fall into old ruts and routines is powerful. However, learning to shift the circumstances – rather than directly trying to override the behavior – can be a powerful approach to changing the behaviors.

For instance, let’s say that you’re frustrated by the way that your friends choose to parent their children – or, more accurately, how they don’t parent their children. Rather than communicating your frustration, you can get up and get a drink or go to the restroom. You’re not directly challenging the desire to share your frustration. That will consume a large amount of willpower. (See Willpower for more.) You’re changing the environment so that you don’t have to see as much of it happen.

I’ve persistently sought to define what leadership is. (See Leadership, Leadership in the Twenty-First Century, Servant Leadership, and Heroic Leadership for a quick survey.) It’s for that reason that I resist the label that Goldsmith applies to four styles of “leadership” that his mentor Paul Hershey created. They are:

I believe that these are more styles of management – getting things done – than leadership – helping people work towards the same overall goals. The types of management are interesting, because they recognize the reality of where those being managed are. It’s much like the process of the apprentice, journeyman, master that we’ve used for centuries to learn trades. Said another way, it’s the progression from following specific instructions to detachment, where what you need is conversation and support to select the right approach, and finally to fluent, where you need no additional supervision. (See Presentation Zen for more on Following, Detaching, Fluent.) The reality, then, is not that one approach to management is better – or worse – it’s that an approach is more relevant to the situation.

Goldsmith explains that he feels like there are magic moves that can dramatically move relationships forward. They are:

This reminds me of Ben Franklin’s struggle to develop virtues in himself and the reality that, as he focused on one virtue, others slipped. (See Immunity to Change and Primal Leadership for more.) We all need to figure out what things we really want to work on. (See The ONE Thing for finding focus on what you’re working on.)

I’m not convinced that Goldsmith’s approach will work for everyone, but if you’re struggling to keep focused on your goals, daily accountability can be a good start. Maybe the first thing to start with is to buy Triggers – and get someone to hold you accountable every day to how much reading you’re doing.