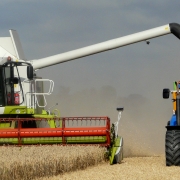 The fundamentals of user adoption were discovered in a corn field in Iowa before 1962. For decades, these fundamentals have been used to explain the growth of technology. You’ve probably seen the adoption bell curve with the labels of innovators, early adopters, majority, and laggards. But you may not have known where it came from or what it means for you as you’re trying to roll out your latest IT project. Everyone is focused on the communication and internal marketing of the solutions, but they’ve forgot to tune into “what is in it for me” (WIII-FM) radio. What appears complicated on the surface isn’t impossible if you break it down.

Down on the Farm

In the two decades starting in 1950 and ending in 1970, US farmers moved from feeding 14 people per farmer to 47. This greater than three-fold increase came due to innovation changing the way farming was done. Numerous changes that arrived one after another greatly improved productivity and at the same time greatly reduced the value of the crops that were being produced. Farmers who took advantage of the innovations became very wealthy. Those who didn’t found that the same level of production yielded them less money. The economics of supply and demand pushed the price per bushel down, so to even maintain their financial footing, farmers were forced to adopt new innovations.

The Iowa State University Agricultural Extension Service and a man named Everett Rogers studied how innovations were adopted in the hopes of helping Iowa farmers adopt innovations faster – thereby helping Iowa’s farming economy remain strong. He and his colleagues discovered that there were five factors that led to adoption of an innovation.

When left to its natural progression, only five things matter when it comes to how quickly an innovation will be diffused through the market. They are:

The more you can manipulate these factors effectively, the greater the changes are that you can get user adoption.

The mistake that is often made in this is to communicate the advantage to the organization rather than the individual. Everyone listens to the messages being sent via WIII-FM. They want to know “What is in it for me?” By communicating the impact of the proposed change to the user in terms of how it will impact them and the organization, the relative advantage is more tangible and adoption is increased.

Of course, listening to the user and considering what’s in it for them personally may lead you to service-level changes that does improve the relative advantage to them.

Sometimes subject matter experts are so enamored with what they’ve built that they offer too much detail. They communicate the “advanced options” when the user just needs the basics. Consider the car you drive. Most of the time, you don’t care how the engine gets the greatest fuel efficiency with variable valve timing. When you tell someone that such a thing exists, they begin to wonder about it and, in some cases, worry about it.

In your communication, you can focus on the important parts like the gas pedal, break, steering wheel, and turn signals. If fuel efficiency is important, communicate that it’s handled, but don’t go into details unless pressed. You’re walking a line between allowing users to make up their own stories about what’s happening and giving them so many details that it “feels” too complex.

One of the most effective ways of driving user adoption of any technology in your organization is by increasing the visibility of the successes. Whether they’re the presenters for show-and-tell, case studies, or something else, publicizing successes is important to helping others know that they could be more successful, too – if they would just adopt your new technology.

If you’re interested in learning more about Everett Roger’s work, you can read more in Diffusion of Innovations.

Book Review-Triggers: Creating Behavior that Lasts – Becoming the Person You...

Book Review-Innovation by Design: How Any Organization Can Leverage Design Thinking...
Scroll to top