Blog
You are here: Home1 / Blog2 / Book Review3 / Book Review-Innovation by Design: How Any Organization Can Leverage Design... 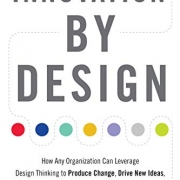 I don’t think innovation comes from design. Then again, I don’t believe the way I think about design and the way Innovation by Design: How Any Organization Can Leverage Design Thinking to Produce Change, Drive New Ideas, and Deliver Meaningful Solutions discusses it are the same. I believe that experiences matter, but I also believe that too many people who call themselves designers are out to gratify their egos rather than put the effort in to listen to the pains of the user and create solutions that solve real problems.

For me, the heart of good design is understanding the user and the world they work in. For me, that is learning to get good at the ethnographic process. (See The Ethnographic Interview if you want to know how.) There are all kinds of crazy things that designers can come up with, but until they have a good model of how the users themselves will conceptualize the solution, they have nothing. The designer needs to be able to run a mental model of the users in their head (see Seeing What Others Don’t for more on mental models), and they need to avoid the curse of knowledge so they don’t assume users know something they don’t – or can’t – know. (See The Art of Explanation for the curse of knowledge.)

Whether you want to call it ethnography and use an ethnographic approach or take a more tactical approach and capture requirements, the key is always building a framework for understanding the user and how they’ll behave under different circumstances.

For most people, there’s linear cause and effect. The world they were educated in doesn’t allow for iteration and loops. There’s no room for seeing how things might work most of the time – or 86.7% of the time. The ability to test in scenarios where the output must loop back into the input just isn’t a part of their thinking. While it’s not possible to really predict all the outcomes of a change (see Diffusion of Innovations for negative outcomes), it’s possible to get better at simulating how things will behave when a process is iterated.

Thinking in Systems is a good primer to help people learn how to think iteratively and use this perspective to design changes to systems and get better results. Innovation and design share the same desire to change the status quo to something better, and the best way I know to do that it is to think in terms of a system that feeds back on itself.

The agile movement is more than just iterations, but that’s one of the key points that you see from the outside looking in. Agile approaches understand that there will be iterations, and those iterations can gradually improve. The improvement is in understanding what the user really needs, the ability to work together, and, ultimately, the solution. Good design is iterative as it allows for both the designer and the subject matter expert to learn from each other. The designer learns the subject matter and the subject matter expert, learns the art of what is possible. No one will ask for an airplane until they learn that such a thing is possible.

The Problems with Design Thinking

I can’t count the number of conversations I’ve had with people about why agile works. I’ve seen hundreds of implementations of agile approaches to software development that fall laughably short of the mark. Agile becomes the reason for not writing requirements and not testing. It’s an excuse – in some organizations – to shirk the work that the developers don’t want to do. When this happens, the organization is in trouble, because we know the things that developers don’t want to do are the very things that help make the project successful.

A similar situation happens with designers. They’re all out trying to show that they’re innovative, and they forget that an idea is only innovative when it’s implemented. If they’re not able to implement the innovation because the menu is too whacky or too hard to update, then it’s not an innovation. It’s just an idea – an impractical one at that.

If you want to be good at design thinking, you’re going to have to get good as psychology. You’re going to have to know what motivates people and how to appropriately adjust their environment to encourage the behaviors you want. Books like Nudge, Switch, Redirect, and The Paradox of Choice expose some of the things that are going on inside people’s brains when they’re faced with choices and how simple changes to the default answer can make a big difference. In The Happiness Hypothesis, Jonathan Haidt uses the elephant-rider-path model to show that the path can have a profound impact on choices, because both the rider and elephant are fundamentally lazy. (Kahneman would say they’re glucose efficient in Thinking, Fast and Slow.)

Too few designers spend any time learning how people are motivated or anything about their fundamental biases to be able to use these in shaping the way they design solutions.

In many ways, organizations think that the cultures shape what people do – and that’s true. However, it’s also true to say that an organizations culture is a creation of the people and processes that the people create. (See Organizational Chemistry for more.) Cultures, once created, are necessarily resistant to change.

In How Buildings Learn, Steward Brand explains how the open office concept failed, but that didn’t stop it from succeeding. Chances are you work for an organization where some part of the space is “open concept.” Joy, Inc. touts this approach for Menlo Innovations software developers. The problem is that the research doesn’t bear out that this is a good idea. (I explained this in my review.) Open concept planning for workers doesn’t work, but open spaces planning for meeting areas – and conferences – can be a great idea. However, it’s not just the space that’s needed.

Appropriately equipping people with the tools they need to be innovative, prototype, and learn fast is great – as long as the assumption isn’t that they never need to be able to work alone. Stocking meeting rooms and shared spaces with idea-generating gadgets and tools for documentation in various forms can prevent some of the barriers to the generation of new ideas.

Being inclusive of everyone in the organization – and in the customer’s organization – is critical. As The Difference explains, those diverse points of view can help you create more amazing solutions than a more limited group of people could possibly make. If you’re going to create Innovation by Design, you’ll need to be accepting of everyone – and allow yourself to read it. (See How to Be an Adult in Relationships for more about allowing and accepting.)