Blog
You are here: Home1 / Blog2 / Professional3 / Adoption and Change4 / Book Review-Change Anything: The New Science of Personal Success 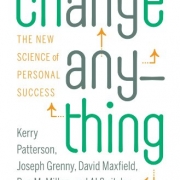 The authors of Change Anything previously wrote Influencer, in which they lay out their framework for change targeted at other individuals. In Influencer, the question is how to motivate others rather than how to motivate yourself. Influencer addresses the same perspectives and approaches from the lens that the change needed to happen is “out there” rather than “in here.” The truth is that most change is “in here.”

Consider Dave Ramsey’s quote: “Winning at money is 80 percent behavior and 20 percent head knowledge… Most of us know what to do, but we just don’t do it.” Most of the time, we know what the right answers are, we just fail to do them.

My favorite mental model of all time comes from Jonathan Haidt in The Happiness Hypothesis, which was picked up by Dan and Chip Heath in Switch. The rational rider sits on top of the emotional elephant, who wanders down the path. Our conscious, rational rider isn’t in control – the elephant is. However, more frequently, neither the elephant nor the rider care that much, and therefore we take the default answers.

Nudge focuses on how we can change the path – the default answers – thereby impacting great change. Making healthier choices easier and unhealthy choices harder has a profound impact on how many people eat healthy, because, all too often, we’ll choose the easy answer.

In twelve-step programs, they call it “white-knuckling it.” They’re talking about the addict who goes “cold turkey” and commits to never using again. Old-timers wait patiently for this to fail, because they know that no one has the kind of willpower to sustain that forever. (See Willpower for more.) Central to Change Anything is the awareness that willpower isn’t the only solution to change – and, as solutions go, it’s lousy, because it’s so prone to failure. We forget that willpower is a precious and exhaustible resource that we should protect.

It’s not that we shouldn’t be determined to make the change, it’s that we should create systems for our success rather than our failure. A lot of that is about changing our environment.

As criminal rehabilitation programs go, Dulaney Street is one of the best. Despite the average recidivism rate of 66.5% after three years, 90% of Dulaney Street participants aren’t reconvicted. The program isn’t perfect, but the results are impressive. (See Change or Die for extensive writing about this program.)

The way it works is that it changes the environment. Ex-convicts realize they’re all in it together. Dulaney Street only works if they continue to make it work. Their peers and friends all want everyone to succeed. They’re allies instead of enablers. The new members of the program are assigned someone to look after them, and, shortly after their arrival, they’re assigned someone to look after. This pulls them out of their own heads and helps them make decisions that are about the greater good rather than just their pleasure. (Being Mortal explains how the need to care for someone or something impacts life spans in long-term care facilities – so the effects of this approach are far-reaching.)

To make a change in your life, you’re most frequently going to need to learn some sort of a new skill. The skill may be tiny, but it will take deliberate practice to get good at it. A long time ago, I treated myself to the purchase of a pinball machine. For years I played it and made only marginal improvements. One day, I decided to be very deliberate about my playing. I started practicing one shot until I could get it with almost certainty. I then moved on to a different shot and practiced it until I got really good at it. The result was that, overall, my performance shot up. I had stumbled onto the idea of deliberate practice. In Peak, Anders Ericsson explains that deliberate practice is what makes top performers the best at what they do.

In the context of change, deliberate practice is the deliberate attempt to develop skills that lead to the change. Deliberate practice breaks down large changes into small skills, and then practices those small skills with feedback from a coach until they’re almost automatic. Here, the value of a coach who can provide objective feedback about performance can be invaluable.

It’s not that we don’t know, as was illustrated by Ramsey’s quote above, it’s that we choose not to be aware. We carefully construct a field of ignorance around ourselves so that the negative consequences of our behaviors are blinded from us. If we smoke, we think that the Surgeon General is a quack (or all of the supporting research is phony – or, better yet, we don’t believe it actually exists). If we’re overweight, we ignore the long-term healthcare costs.

The process of our ignorance may be unconscious, but it’s not passive. (Passive ignorance is also a possibility. See Incognito for how our mind passively lies to us/itself.) It is an active decision by our ego to allow us to maintain our bad habits despite the evidence that these bad habits are often literally killing us.

How to Eat an Elephant?

One challenge, even after big goals are broken down into little goals, is in tracking to ensure that you can feel like you’re making progress. If you can’t point to something and say definitively that your small changes are working, you’re not likely to persist long enough to make the big changes.

What’s normal for one person at one time is different for another person. Though we treat normal as a fixed point, it moves. Consider the habits of two different families for the holidays – or how your normal changes in your own world. It may be normal for you to go visit your parents until you have your first child, when normal suddenly becomes staying home and snuggling around a fire.

By consciously redefining what normal is, you can shift your behavior without requiring huge amounts of willpower. Once you’ve redefined what normal is, it no longer requires willpower or commitment to maintain that new normal. Being intentional about what the new normal is can make the process of defining a new normal happen quicker.

There’s a fear that we’ll struggle with a change for a long period of time only to fail at the end. However, the road of failures isn’t littered at the end but instead is jammed up at the beginning. It’s rare that we get all the way to the end and realize we’ve failed. It’s more often that we abandon a change very early.

Are there activities that you started that you thought were going to be a part of your life forever? Maybe it’s a passion for scuba diving, a new fascination with martial arts, or learning to become a private pilot? For most of us, we get started with this new hobby and get sucked into it for a while. But then, relatively early, something happens, it breaks the magical spell, and we stop the activity all together.

We don’t need to fear that we’ll fail at the end. We need to consider how we can make a change and make it stick for a few months, and we’ll be much more likely to succeed in our changes.

The way we accomplish change in our lives and in the worlds around us isn’t by finding one approach or pulling one lever that magically makes our lives take a turn. Instead, the magic is in finding the right set of things that we can use in concert with one another to make changes easier. While the change process may rely upon the firm commitment to make the change, it is just the beginning.

It takes using tools for change to make the process more manageable. We can’t white-knuckle change, and we can’t expect that one small thing helps us change a major part of our lives. However, someday, if we’re willing to keep trying, we may find that one small thing – or a few small things – makes it possible for us to Change Anything in our lives.