Blog
You are here: Home1 / Blog2 / Personal3 / Parenting4 / The Progression of Parental Alienation 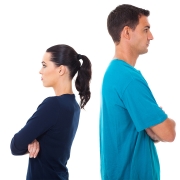 I was recently in a conversation about the toxic effects of parental alienation and how it tears apart relationships and harms children. The folks I was discussing it with didn’t have answers either. They practiced family reconciliation therapy, but that didn’t always address the root of the problem. After the conversation, I sat to ponder what causes parental alienation and came up with this model for stages the parental alienation process follows. I don’t offer a solution. I offer up this framework, so that it may be better understood from the point of view of the parent who is doing the alienating.

The parent who will ultimately be the alienating parent needs to justify their decision to divorce the other parent. Most of the social constructs don’t allow for a parent to divorce for their own needs/desires when children are involved. There’s the “we stayed in it for the children” expectation. So, if they split from their spouse, they must justify it somehow. They could use generally accepted reasons to divorce: adultery, abuse, or abandonment. Of course, if there’s no adultery to cite, and it doesn’t seem easy to manufacture, they can’t use that excuse. Similarly, when the other parent is actively seeking custody, trying to interact with the children, and even win custody, the abandonment story won’t play. They’re left with abuse as the only acceptable reason to divorce – one that’s hard to disprove.

After all, abuse can be emotional abuse. It can be threats. It can be anything. So, as their ego works to justify their decision, it progressively transforms normal memories into memories of alleged abuse. This is just stage one. My guess is that this actually happens pre-divorce filing, because, again, it’s the justification for the action.

Phase three is when the children pick up on this. Divorce for children is a traumatic and unsettling experience, so their defenses go up immediately. They become hyper-sensitive to their parents and their emotions. They seek to minimize the risk to themselves. When a parent acts like a victim and engages in behavior that leads them to believe they’re fearful, they’ll pick up on it and mimic it. They believe that the right and normal behavior is to fear the other parent. At this point, alienation has set in – and it may be that the parent causing the alienation never said a single word to that effect to the children. The children “caught it” from the environment.

Stage four is reinforcement. The parent now sees the children acting defensive and fearful – at least in their presence. They expect that this is the behavior the parent expects, so they give it to them. After all, they just got rid of the other parent – what’s to stop them from getting rid of the children? (I’m not suggesting that any of this is conscious, just that it fits patterns of thought.) So now the parent has the justification they need. It’s not built on “facts” that are solid – it’s built on the echo chamber created between the children and the parent. The system is feeding itself at this point.

While this process isn’t grounded by facts, it becomes sufficiently powerful that the parent who is doing the alienatingare unlikely to listen to reason. Professionals ask questions like: “Has the other parent ever done anything to give you cause for concern?” The alienating parent responds with vague answers – and sometimes completely fabricated answers that seem true to them. In the absence of evidence, it’s prudent for everyone involved – lawyers, counselors, judges, etc., to consider it. There’s no way to know if it’s real or imagined. It’s apparent that no amount of reality or logic is enough to dissuade the alienating parent from their perception. It is self-protecting. Anyone who doesn’t agree with their version of the facts is now out to get them.

Standard reunification therapy involves children having a good time with the alienated parent. It’s designed to create a progressively more positive environment – but, interestingly, this would necessarily create a discontinuity. They must behave one way with the parent doing the alienation – even if they’re OK with the parent that is being alienated. I think the therapy is right… but it’s interesting to me what it must cause.

I think, in some cases, it might be possible to get the alienating parent to see the fact that they’re not remembering reality correctly. I think it would require interviews with their family (people they’d expect to be loyal to them) and get them to admit that they didn’t have serious concerns about the other parent – presuming that they’ve not joined in the justification process already. They have their own reputations to protect as a family after all. Maybe the parent doing the alienation could be asked for photographic or video evidence of the concerning behaviors. Even if you can get them to realize that it’s not true, it would cause the secondary problem of causing their justification to evaporate – and I’m not clear what they might do in that situation.

I don’t have answers. I was just trying to think through the systems to see what might be happening. I think that, for the mental health of the children, it’s necessary to break the cycle, and just working on their perception may not be enough.