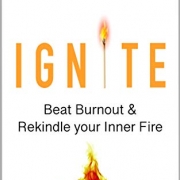 Imagine, for the moment, that you felt like India was the edge of the world. You had fought your way to what you felt like was the edge of civilization over eight grueling years – only to see more land before you than you could see the end of. Your expectations of going home and seeing your family again are dashed in a moment, and you confront the reality that you don’t know when your quest will end. This is one of the stories from Ignite: Beat Burnout and Rekindle your Inner Fire. It’s the story of Alexander the Great and his devoted army losing their hope and ultimately facing burnout at what was supposed to be the end of the world.

Ignite focuses on the eight years of hardships. It proposes that, even though the army was fiercely loyal to their king, they had nothing left to give. However, I’m not convinced. In Extinguish Burnout, we point out that it’s the gap between expectations and reality that can create burnout. Things snap because the anticipated break or accomplishment doesn’t come when it’s expected.

While it’s true that the army had accomplished a great deal during its time and sustained heavy losses as they carved their way through the continent, that’s not the real problem. The real problem is they lost their way. Not they couldn’t read their compass, but they thought their leader – and they themselves – knew the truth about the end of the world. When it wasn’t there, their belief that they could reach it was dashed not by another army but by the expanse of land that still remained in front of them.

An important point that Ignite makes is that burnout in one area of your life will bleed into other areas. You’ll be affected in your work if you are burned out at home. And vice versa: when your work life is a train wreck, you’ll want to come home and “kick the dog.” Of course, that doesn’t help anyone, but the desire to take your frustrations out elsewhere are understandable.

The bathtub model that we use in Extinguish Burnout is filled with results, support, and self-care. What we don’t say is that you have different bathtubs for different areas of your life. When you’re feeling good at home, you’ll be more assertive at work and vice versa. You don’t have one bathtub of personal agency. You’ve got several connected bathtubs that cross-feed one another.

Everyone with drive has a “fire in their belly.” This drive keeps us going, and it’s the thing we lose when we encounter burnout. Instead of being willing to take on any challenge, we stop at the first sign of difficulty. It isn’t worth it, we’ll think. That’s when we know that burnout has taken hold.

Your inner fire is your passion. It’s what sustains you when there are barriers in your way. It’s the drive that allows you to look past the lack of results in your new business for six months, a year, or however long it takes, because you know it’s right. In Jim Collins’ words, it’s the Stockdale Paradox. (See Good to Great for more.)

Ignite makes the point that passion needs both purpose and action. Purpose as a focusing force that keeps us moving in a direction, and action to get something done. I’m not convinced that either Drive or The Psychology of Hope would view sustaining passion this way. Start with Why would certainly recommend purpose as an ignitor for passion, but it gets muddier as we look to the way that action is defined.

The book is a more story-based and novel-like, but it’s not necessarily a clear path from burnout to reigniting your fire. Of course, you can take an action: read Ignite and see if it can rekindle your inner fire.