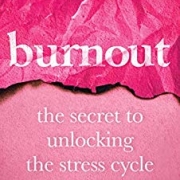 People now casually mention that a friend of theirs is reading a book on burnout. Because I’ve read so many of the classic and contemporary books on the topic, I have begun to ask which one, believing that I may have read it. When I asked that question recently, the answer was Burnout: The Secret to Unlocking the Stress Cycle. Having not read it, I picked it up and began a journey.

Discrimination can be a good thing when it’s separating different aspects of something. When it’s used to separate people, it’s a bad thing. We speak of a class of people, and we minimize or dehumanize them. Burnout is direct in its admission that it’s designed to be read by women. That doesn’t slow me down a beat. Much of Brené Brown’s work is designed for women as well. However, it gives me pause when a marginalized group decides to take a position of victimhood against their perceived oppression. (See Boundaries, Beyond Boundaries, Daring Greatly, and Change or Die for more on victimhood.)

Burnout gave me this pause. I felt like, at times, the authors were more interested in pointing out the evils of the patriarchy than they were in fixing it or trying to elevate women’s concerns in a way that helps unravel patriarchy. From my point of view, you can elevate women without tearing down men. You can address the topic without trying to turn the tables.

The master caution I have for Burnout as a book is that some people may encounter it, excuse their burnout as something that someone else caused, and therefore not try to resolve it. The simple truth of the situation is that, no matter who caused you to be in burnout, you’re responsible for getting yourself out of it. You can’t expect others to do the work of healing, you have to do that yourself.

We process our emotions. We work through them. Emotions are beyond our control but not beyond our influence. We can stuff them. We can ignore them – to a point. We have some influence on how and the degree to which our emotions surface. Burnout explains that one of the challenges that causes burnout is emotions end up getting stuck. They end up not being processed. The Zeigarnik effect kicks in, and the emotion becomes more powerful. (See The Science of Trust and Emotional Appraisal Theory + Zeigarnik Effect => Anxiety for more on the Zeigarnik effect.)

I’ve been in the “splash zone” near a family where emotions are suppressed. Emotions for that family are simply not ok. They’re not supposed to have emotions good or bad and the impacts are tragic. We’re not designed to operate by denying our emotions and in addition to a lack of happiness, the design of the family system led to mental illness.

If you suppress emotions and prevent them from reaching their conclusion, they’ll rise to the surface, like lava suddenly erupting, into behaviors that no one likes.

Burnout describes “human giver syndrome” as a malady driven by the belief that someone can’t be a human being, because they’ve got to be a giver. Their needs aren’t as important. They’re supposed to become subservient to others. This is a subtle message that exists in the way that girls used to be raised. Their goal was to get their “Mrs.” Degree. It didn’t matter what they got the degree in. The point was that, with a college degree, they were more likely to find a husband.

There’s a healthy desire to help others. There’s also an unhealthy degeneration of oneself as being unworthy of love simply because you’re you. We’re all worthy of love and respect because we’re members of the human race, not because of what we do. (See The Road Less Traveled and The Gift of Failure for more on performance-based love.)

Like many authors, the Nagoskis perceive stress as a cause to burnout rather than a contributing factor. Unlike other authors, they recognize that stress is what we make of it. Our appraisal of a stressor allows us to decide whether it will become stress or not. (See Emotion and Adaptation for more)

Their view is that stress is only bad when we’re no longer able to process it. I’d argue that stressors are only bad when we’re no longer able to address them. The key being that a stressor doesn’t have to become a stress. When we’re in stress, I believe that we’re doing long-term damage to our body. The trick is to become focused and motivated without crossing over into stress and the associated chemical cocktail that comes with it. (See Why Zebras Don’t Get Ulcers.)

There is a switch that trips. It’s called “the monitor.” It’s the moment between your goals being attainable – but difficult – to unobtainable. It’s the moment, more than any other, that burnout happens. It’s the moment where we lose our sense of learned control and fall into learned helplessness. (See The Hope Circuit for more.) More than anything else, it’s this switch tripping that causes us to fall into burnout. The trick is there’s no way on the outside to see that the switch is about to trip.

That’s why when we talk to folks about burnout, we encourage them to keep their personal agency bathtub full. The more you recognize and believe your capacity to get things done, the less likely it is that the switch will trip.

Growth of What You Don’t Know

This is problematic as we go through life, because we’re bound to learn more even if we’re not trying. The result of this is that we become more aware of the things that we don’t know. It can be discouraging to start in any area of our lives thinking that we just need to learn a little, and the more we learn, the more we feel like there is to learn.

I’ve been reading a book each week for years now. Every single week, there’s a book review posted that chronicles what I’ve been reading and learning. The problem is that, when I first started, I picked a few books that I should read. I’d carefully highlight references to other books so I’d know what to read next. Today, I have dozens of books on my iPad and hundreds in my wish list. As I’ve learned more, I’ve discovered there’s more for me to learn.

This is sometimes discouraging. There is no end. It seems like I’m falling further behind. I must counter this with the awareness of what I have learned and knowing there are still things that are learnable. I have to fight the natural tendency to see the “slippage” in terms of how much there is to learn as moving backwards, when it’s really moving forward with more awareness. It’s a form of positive reappraisal that’s critical if I want to avoid burnout.

Save Yourself, Save a Marriage

Embedded in the discussion of burnout was a strange but important remark. It was that, to save the marriage, a friend needed to save herself. There’s a tendency to blame other people for our situation – fundamental attribution error. (See Thinking, Fast and Slow for more.) While discussing the challenges of their friend, it was clear that the friend had to escape burnout and get right with herself if she was to save her marriage.

She wasn’t a victim of her partner. (See Boundaries, Beyond Boundaries, Daring Greatly, and Change or Die for more on victimhood.) Her responses were fueling the sick cycles that were making things work. (As were her partner’s.) Gottman is known for his work on identifying couples who are going to ultimately divorce. In his book, The Science of Trust, he explains how our responses are sliding door moments, where we can either do something to build the relationship, or we can withdraw from it. I believe that, for any of us to have a good relationship, we must first learn How to Be an Adult in Relationships.

Visionaries and dreamers create a world in their mind where the imperfections of today are already gone. At some level, they live in this dream world. The challenge for them, and all of us, is the gap between that vision and current reality. It’s easy for “the monitor” to make the future vision unobtainable, but we’ve got to guard against it. It would be easy to descend our vision to today’s current state, but to do so would mean giving up on our desire to make things better.

In our quest to prevent burnout, we’d lose the very drive that we’re hoping to protect by avoiding burnout. We’ve got to find a way to maintain the gap between that perfect possible future and the reality of today.

In Star Trek, there’s a test for new captains. It’s an unwinnable test called the Kobayashi Maru. The point of the test isn’t to beat it. The point of the test is to show your character while losing. (That is, unless you’re James T. Kirk.) The truth is that we will run into unwinnable situations. We’ll accidentally stumble into places where, no matter how much grit we have, we’re not going to be successful. (See Grit for more on grit.) The trick in these situations isn’t to win, the trick is to lose with character.

It’s easy to say that you should persist. However, the question is for how long. Our energy is an exhaustible but renewable resource. If we can’t succeed at something, how do we become ok and move on to the next thing that we might be successful at? There aren’t any clean answers to these questions, but learning to walk through them with your head held high may just be the way to avoid Burnout.

Conflict: The Impact of Trust (Self and Other)