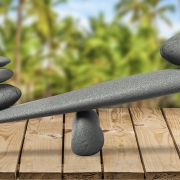 The parent sets a boundary, says no, and the child retorts, “But, it’s not fair.” The parent certainly thinks it’s reasonable and fair, but the perspective of the child is different. So, who’s right? How do you define fair in any situation? The gap in perceptions between two people and what they believe is fair is generally right at the heart of the conflict.

When we comment that something isn’t fair, we believe it wasn’t handled impartially. It’s not fair that she got the job, because she’s the favorite. He’s not the best fit, but he plays golf with the boss, so he got the job. We expect judges to be impartial, and that’s why there are so many rules about what they can and can’t (or rather should and should not) do as it relates to the parties in the case. We expect that they’ll recuse themselves if they believe they can’t be partial. (To recuse oneself is to say that you’re unfit because of potential partiality.)

In our real lives, rarely do we get the option to recuse ourselves from the decisions that we must make. Whether it’s deciding between one child or another’s activities or choosing which family to visit for an important holiday, we can’t just let someone else make the decision. What we can do to minimize conflict is to communicate the criteria that we used and make it clear why we made the decision that we did.

Ideally, the criteria being used by the decision maker and the criteria of the person who feels slighted should align, but rarely do they. When we’re saying that it isn’t fair, we’re often complaining that the criteria we are using wasn’t the criteria the other person was using, and so the decision didn’t turn out the way we expected it to. The reality of our brains is that we make our decisions and then we rationalize them. Maybe she smiled a bit more or he made better eye contact. Neither objectively has impact to the matter at hand, but it shifted things in their favor nonetheless.

Even if we can align on criteria, we may not align on the way the measurement of that criteria is done. One person may believe the criteria of scholarship is best expressed through the works they’ve read, while another party may believe that the best criteria is what they’ve written. Conflicts can persist even when the criteria is the same if the way it is assessed is different.

The truth is we all have our perspectives that are based on our prior experiences, including our experiences while growing up. Our perspective is not wrong, they’re just incomplete. We see things from one point of view, and the other party sees it from a different point of view. The parent in the opening example believes it’s important for the child to learn to eat their dinner. They’ve made a value choice about learning good eating habits. The child is focused on the here and now and their desire for immediate gratification with some candy. In this case, the criteria that the parties are using are radically different.

Parents might say that the parent perspective is “right,” while children may side with the child in this example and wonder what’s the harm in one sucker. By operating on two different levels, the conflict persists, until the child gets to experience the authority of the parent in the situation. In peer relationships, it’s not so easy to resolve the disagreement with “I said so.”

To find fairness in the situation, we must establish the criteria we’re using and then the standards by which we’ll evaluate that criteria. Done well, this can resolve conflicts quickly – or avoid them altogether.

Book Review-This is Marketing: You Can’t Be Seen Until You Learn to See