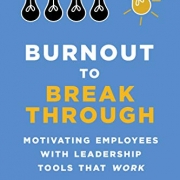 Everyone has a backstory. You do. I do. Every author I meet does. Everyone I read has some sort of a backstory that has led them to where they are today. That’s certainly true of Ina Catrinescu. She relates part of her childhood from the former Soviet Union in Burnout to Breakthrough: Motivating Employees with Leadership Tools That Work. She has a unique perspective on the “chains” that bind us. Having moved from the socialist world to the capitalist world, she’s seen firsthand how both worlds have the capacity to demoralize and demotivate people. One was enslaved to an immutable dogma, and the other is tethered to a rat race.

Around my house, the family is quite fond of saying that, if anything can be done, I’ll overdo it. I believe in excellence and have been known to take on some crazy projects. (Like the solar powered mini-barn.) However, I’ve got absolutely nothing on the Japanese, who created a whole word that means “overwork to death:” karōshi. It’s more than a high suicide rate. It’s literally being so encompassed in their work that they’ll keel over at their desks. They’ll work until they simply can’t work any longer.

Not to be outdone, the former Soviet Union taught kids songs that basically translated to, “Your only purpose in life is to work your fingers to the bone, and you better do so thoroughly because the whole country is watching!” While this may not rise to the death toll of karōshi, it’s still a powerful push towards overwork.

In America, we’re subject to our own factors. Our protestant work ethic has us believing that we need to work not to live but rather work to achieve. Achievement, for many, is measured in the cars you drive, the neighborhood you’re in, and the clothes you wear. We work so we can get more things that prove to others that we’re working. As more people work and can afford these things, we must find ways to differentiate ourselves and demonstrate that we work hard.

Productivity has improved 97.5% since 1960, but that hasn’t meant that we work fewer hours. In truth, we’re working as many or more hours today than we ever have. Greater productivity isn’t reducing the number of hours we’re working.

Communism was a grand experiment. At least in the case of the Soviet Union, it didn’t work out. Another experiment was done in Canada that did work out – until it was stopped. What would happen if you offered people money every month with no strings attached? Would the recipients become lazy and do-nothing, or would they use the money to get back up on their feet? The experiment in Dauphin, Manitoba, Canada did just that. Money was provided to low-income residents with no strings attached. They could continue to receive it for as long as they needed it.

The results seemed positive even though the program was stopped. It seemed like the results were better health, but as of now, the program hasn’t been tried on a broader scale.

Most organizations measure their results with a balance sheet. It’s net income that matters. However, much like gross domestic product doesn’t capture the full picture of the good we’re doing, profit isn’t the full measure of the organization. (See The Hope Circuit for Gross Domestic Happiness.) Red Goldfish explains how looking at the good you do in the world may be good for your bottom line. Reinventing Organizations focuses on how increasing the level of consciousness in the organization can be an important part of bringing more joy to the individual, the organization, and the world.

More people are trying to figure out how to run their lives with the new bottom line. Instead of it being all about money, it’s about impact. While not everyone is trying to find a way to make the world better, more people are considering it. Given that the roots of burnout exist in the world of caring professions, in which professionals try to “change the world,” it’s no surprise that this idealism, while beneficial to the world, can cause challenges to the psyche of the individual.

Finding your “why” is a challenging – and evolving – thing for everyone. (See Simon Sinek’s Start with Why for more.) Despite the challenge, without a sense of purpose, you’re likely to find yourself adrift without a clear sense of what you expect to get done and what you need to be focused on.

Privilege of the Platform

Years ago at an NSA annual event, I heard a comment that has stuck with me. “The privilege of the platform” resonated, because, despite the fact that so many people fear public speaking, it’s still an honor to be asked to share what you know with so many people. The platform isn’t a right, an obligation, a duty, or a task to be done. It’s a privilege. Similarly, management can be seen as a burden or a great opportunity. Robert Greenleaf in Servant Leadership speaks about how leaders serve those that they lead.

When we speak about burnout, we find that we speak about the difference between “having to” and “getting to” do something. It’s obviously a mindset shift, but it’s one that makes a big difference.

Values are not Virtues

Everyone has values. Whether we can articulate them or not, everyone has values that they hold. However, not all these values are virtues. Just because you value something doesn’t make it virtuous. It seems that too many people believe their values are universal values that everyone holds rather than recognizing that we each have our own values and motivators. (See The Righteous Mind and Who Am I? for different ways of learning what values we hold and what motivates us.)

We must accept the reality that others hold different values than we do.

Book Review-The Burnout Solution: 12 weeks to a calmer you