Blog
You are here: Home1 / Blog2 / Professional3 / Psychology4 / Book Review-Quiet: The Power of Introverts in a World That Can’t Stop T... 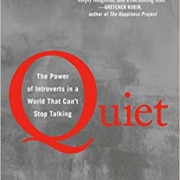 Terri and I give a talk on conflict de-escalation and resolution with great regularity. One part of that talk is about the Myers-Briggs Type Indicator (MBTI) and specifically the introversion-extroversion scale. I – from the front of the room – ask the audience to predict whether I’m an introvert or an extrovert. Rarely do I hear introvert. In this context, it makes sense; but in the context of reading a book and writing a review each week, it doesn’t. As an introvert who lives in an extroverted world, I felt like I needed to read Quiet: The Power of Introverts in a World That Can’t Stop Talking. In part, I needed to understand the world and how extroversion was valued, but I also needed to understand myself and how I could maintain this disconnect between a speaking personality and a reflective one.

Being a sensitive person isn’t said as if it were a strength or virtue. It’s said with an air of disdain for the fact that you can’t adapt to the world more easily. It’s said as an accusation of a character flaw rather than the positive capability that it can be. This is at the root of the conversation between introverts and extroverts, because our degree of sensitivity has a high correlation to our introversion – or lack of it.

It seems the answer to why we’re introverted vs. extroverted may lie in our desires to regulate the amount of stimulation that we’re getting. Introverted folks tend to be more sensitive and therefore use quiet, isolation, and reflection to regulate their stimulation to a comfortable level. Extroverts, conversely, tend to be less sensitive and therefore need more excitement and interaction to reach their ideal levels of stimulation.

My family connections run back to Chautauqua, New York, where a religious training center was started that eventually radiated out speakers to lecture on literature, science, and, of course, religion. It was the late 1800s, and it was a time when there was a “culture of character.” What you did in private was more important than the impression you made in public.

The character of a person was the very fabric of the nation, as people didn’t aspire to be famous but instead devoted themselves to being defined by their actions. It was a time of rural ruggedness and of hearty work to keep the hearth warm. There wasn’t time for such luxuries as caring what other people thought of you. You spent your time fighting off the wilderness and providing for your family.

At the heart of the transition from culture to personality was a young man named Dale Carnegie, or at least that is what he changed his name to. His parents expected him to become a teacher or a preacher. They didn’t anticipate that he would descend into the role of a salesperson. They thought this was beneath the moral fiber of the child they raised. But the times had changed. By the early 1900s, more people were living in cities, the threat of death was further from people’s minds, and there was a need for people who could sell.

The transformation had started, and Carnegie was at the center of it. Instead of honor and reputation, people were valuing charisma and enthusiasm. We had transitioned from interested in how we behaved in private to how we behaved – or at least were perceived – in public.

Take Me to Church

The evangelical movement may be losing steam. John Dickerson’s book, The Great Evangelical Recession, cites data that indicates that fewer people are going to church. More people are describing themselves as spiritual but not religious. However, the rise of evangelical churches transformed the church experience. Churches today are becoming more show and involvement with fewer opportunities for contemplation and reflection. We’re entertained by feature soloists and engaged in group community through singing.

For me, it barely registers. I recognize that it’s a show – perhaps the right show and a necessary one, but a show nonetheless. For someone who has already learned how to adapt to the needs of a world that is more extroverted, this seems like a little thing; but to those who are desperately seeking refuge from the storm that we call life, it can be easy to see how one more adaptation may be too many.

One thing that I’ve learned not to pray for is patience – because God doesn’t give it to you, he teaches you patience. Patience is an underrated virtue that somehow got lost in our rush to the velocity of our new world. Einstein was patient and persistent. So was Edison and his thousand attempts to make a lightbulb. However, in today’s world, we rarely reward those who toil in obscurity. The culture of personality doesn’t value patience like the culture of character did.

Introverts are, on average, more patient. They’ll stick with it a little longer. They’ll have a bit more grit (see Grit). Their internal interests drive them towards figuring out how things work, and once they’ve figured out how things work, they can create unique solutions to problems that others can’t find.

Introverts can often adapt to the world around them, finding ways to fit in, but it has a cost. It’s possible to be in a situation more suited for an extrovert as an introvert. It’s not that it’s not possible – as the introduction to this review indicated. The tricky part is that introverts can only do this for so long. They’re putting on a show, and the show has a cost.

First, when the introvert’s internal resources are depleted (see Willpower), they won’t be up for an extroverted experience. Second, they’ll need recovery time. Terri and I, though rarely lacking in a conversation, will find that, post-presentation, we often sit in near silence so that we can both recover. (She’s an introvert, too – just not as strongly as I am.)

We know that, in many ways, we have a natural “set point” that we seek. We can, with conscious effort, reach to heights of extroversion – but not when we’re exhausted. Fitting into an extroverted world requires willpower – and that isn’t always available. Experts believe that we can stretch into uncomfortable areas – but only so far. Like a rubber band, we’ll keep coming back to the place that is more natural to us.

Introversion Is Not a Disease

Ultimately, introverts need to learn to accept the values of their nature. It’s introverts that allow us as a civilization to accomplish great things. Our extrovert friends and relatives need to accept us for who we are and recognize our values. That isn’t to say that there isn’t value in the gregarious. Rather, it’s valuable, just not essential. Love is essential. Gregariousness is optional.

If you’re an introvert, get some Quiet – and take your power.

Book Review-Eight Dates: Essential Conversations for a Lifetime of Love

Book Review-Getting to Yes: Negotiating Agreement Without Giving In
Scroll to top