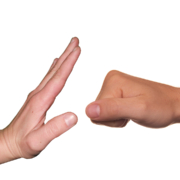 For a conflict to end, someone must surrender. They’ll either surrender with acceptance, or they’ll surrender in defeat. Because conflict management is a delicate game of how to manage both the relationship with the other party and the immediate needs of the situation, there will be times when it will be necessary for someone to walk away in defeat. However, most of the time, the goal is to strengthen the relationship, and that means reaching a surrender that is accepting.

Of course, from our perspective, we’re right. There’s no point in taking a position that doesn’t have us being right. However, who is objectively and verifiably right in a situation isn’t always the right way to measure the results of the conflict. The right way is whether you got what you needed, and you’ll be able to salvage the relationship in the future.

In this context, we can view a surrender in a conflict to be a defeat – after all, our ideas didn’t win out. Conversely, we can choose to view the surrender as accepting a different point of view – without necessarily agreeing with it or believing it to be the one truth.

Yield signs in traffic are easy most of the time. If there’s no one coming, you can look, and then move forward cautiously. It’s when there’s traffic coming that yield signs get interesting. Yielding – or surrendering – in a conflict isn’t as easy. By our very nature, we believe that we’re right and the other person is wrong.

When we yield – or surrender – to another person, we’re giving up our view of right and accepting theirs. We can do this because we value the relationship more than the specifics of the conflict or because we feel like there’s no way for us to win.

To surrender to the other person is to yield our version of right to their version of right – thereby admitting that we were wrong or didn’t know what we were talking about. That’s never easy, as our ego is firmly entrenched in the idea that we’re right. While at some level, we know that we’re not always right, we believe that, in most cases, we’re right, even when there is someone else who disagrees with you.

Learning how to yield and not feel like a failure is an important first step in being able to surrender and do it well.

Failure Is Not Fatal

We often confuse the idea that we’ve failed with the idea that we’re a failure. We fail to decouple the situation from the person. Instead of taking a decision to yield to someone else’s perspective as just another thing, we attach that failure to our identity – and feel lesser because of it. To escape a conflict with a surrender based on acceptance of the other person, another idea, and perhaps that we’re wrong, we must realize that failure isn’t fatal.

In the game of life, no one hits the ball every time it comes by. In the game of life, the average may be much lower than one in three – it may be one in ten or more. The key to moving forward with these failures is admitting to them and letting them go.

Someone is going to end a conflict with a “failure” of their idea. How do you make sure that you’re okay with that being you when it’s appropriate?

Unity Packages Overwrite One Another On HoloLens and HoloLens 2

The Hidden Logic Behind Perceived Situational Safety
Scroll to top