Blog
You are here: Home1 / Blog2 / Professional3 / Adoption and Change4 / Book Review-How to Be a Change Superhero: The Business Toolkit to Help... 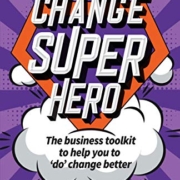 There’s the moment right after you realize that you’ve been assigned to your first change project when panic sets in and you begin to wonder How to be a Change Superhero. Whether the thought crosses your mind early in the process or late doesn’t matter. What matters is that moment of panic when you realize that you don’t have the tools you need to accomplish the change you’re being asked to move forward in the organization. How to be a Change Superhero: The Business Toolkit to Help You to ‘Do’ Change Better is all about helping you cross the chasm between your current self and the hero that exists inside of you.

Joseph Campbell wrote The Hero with a Thousand Faces and developed what he believed to be a universal story arc that has become known as Campbell’s Hero’s Journey. The journey always starts with a limited awareness of the current situation and proceeds through a period of self-denial and self-doubt before the hero emerges. Everyone wants the hero to emerge.

Richard Beckhard and Reuben Harris developed a change equation that is C=A*B*D>X, where C is the degree of change, A is the level of dissatisfaction with the status quo, B is the desirability of the proposed change, D is the practicality of the change and X is the cost of change. Said more simply, change only happens when the pain of changing is less than the pain of staying the same. In principle, I agree with the formula, though I’m careful about the multiplicative aspect of the terms. I’m not completely convinced that they’re mutually exclusive or that the effect is as dramatic as the multiplication might suggest.

Everett Rogers expressed it differently. In Diffusion of Innovations, he explained that there are five factors that influenced the rate of adoption of an innovation (the rate of change): observability, trialability, simplicity (lack of complexity), relative advantage, and compatibility. In Rogers’ model, the lack of any of these discourages change.

One of the most powerful realizations in change is that you’ll likely not succeed if your approach is to get people to do things against their will. Commanding people to do something just doesn’t work as well as we would like it to. People don’t appreciate the idea that they have no choice, that it’s not their desire to do it but they must. This builds resentment, and resentment results in friction everywhere. Not only will the specific thing that’s being commanded face resistance, but so, too, will most things that you ask the person to do – even things they do want to do. The resentment around one area of their work world will bleed into other areas as well.

If you want to care for the people that you’re asking to make change, you’ll have to be sincere. It’s not possible – in a sustained way – to pretend to be sincere about your concern for others but not really be concerned. Somewhere, somehow, it will eventually leak out, and the resulting backlash will generally make people not trust you any longer. So, while in the short-term, faking sincerity might be possible, it’s a bad idea, and in the long term, it’s not possible at all.

If you want to become a change superhero in your organization, maybe read How to Be a Change Superhero.

By the way, Lucinda Carney has a toolkit related to the book available if you’d prefer to start with that.

Constant change on the Microsoft 365 platform means progress, but it also means change that can be disruptive to your users and create frustration and angst with the platform. In this session, we’ll look at[...]
May
1
Sat
10:00 am Extinguish Burnout: Practical Gu... @ IMDA Meeting
Extinguish Burnout: Practical Gu... @ IMDA Meeting
May 1 @ 10:00 am – 12:00 pm

You know that communication is a cornerstone of effective change but did you know that there are proven communications techniques that you and your team can use to improve the responsiveness of the organization to[...]

Object Hierarchy and Scripts in Unity