Blog
You are here: Home1 / Blog2 / Book Review3 / Book Review-Growth Has No Boundaries: The Christian’s Secret to a Deeper S... 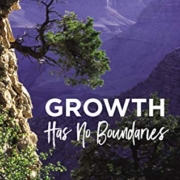 It’s difficult to disagree with people you perceive as wiser than you. Your initial response is that there must be something wrong with your thinking. That’s the feeling I had as I was reading Growth Has No Boundaries: The Christian’s Secret to a Deeper Spiritual Life. I’ve got deep respect for both Dr. Henry Cloud and Dr. John Townsend. I refer to their work often. (See Boundaries, Beyond Boundaries, Changes that Heal, Integrity, The Power of the Other, and Safe People for other books by them.) However, I felt like in this book, they’ve moved from empowering people to move with Christ to suggesting that people should take their hands off the wheel and let God “magically” fix things.

For me, Jesus had a simple message of love and inclusion. That applies to whether you’re an atheist, a Muslim, a Hindu, a Buddhist – or any other faith. It’s not my role to judge as too many Christians have tried to do. I have shaped my view based, in part, on the Jesuits (see Heroic Leadership).

I also believe strongly that we have a responsibility for our own destiny. While God (in whatever form you believe in) is benevolent, we’re expected to participate. I resist when people tell me that all you must do is just pray and God will make it all better.

If you look up some of the original words that we use today and find their core meaning, it may surprise you. For instance, sin means only to be separated from God. It’s distance, not a condemnation. Of course, being away from your community was, at the time, a life-threatening event, but it didn’t necessarily mean that you were bad – or even that you did bad. (See I Thought It Was Just Me (But It Isn’t) for more.

We like to talk about “ye of little faith,” yet in Greek, faith is always a gift from God. So, someone is effectively telling you that you’ve been cursed if you don’t have faith (because they don’t themselves understand what faith is). Prayer is the exchange of our worries or concerns for faith.

This knowledge drives me to be cautious of people who become too wrapped up in the current definitions for these words and their meaning. One last, frustrating topic is the idea that Jesus said to turn the other cheek to promote pacifism. In the context of the time, it was more likely designed to cause the person to show their true character, so that you would know what to expect of them. However, it’s almost never taught that way.

Personal growth has, according to Cloud and Townsend, been viewed from four models:

However, these four models don’t adequately address the breadth of growth that they were seeing in practice. People were growing but not through one of these classical approaches.

Even in more mainstream counseling literature, there’s an awareness that we’re painfully bad at being able to predict what will – and won’t – work in therapy. The Heart and Soul of Change basically admits that, beyond therapeutic alliance – how well you get along with your counselor – very little predicts success or failure at addressing the chief complaint when you approach counseling. While personality tests have struggled to try to find ways of identifying pathologies so that they might be removed, they’ve failed miserably at this task: even the best instruments don’t have the kinds of reliability that one would hope for. (See The Cult of Personality Testing for more.)

Growth Has No Boundaries is an attempt to capture some of the aspects of what was working so that more people could get past their barriers.

Cloud and Townsend dance around the issue of integrated self-identity by focusing only on the idea of a spiritual life separate from your “real” life. They illuminate the truth that we are one person and we have to accept that the one person we are is the person who shows up wherever we are.

I’ve spoken a great deal about an integrated self-image, most recently in my review of Braving the Wilderness. The concept goes by different names dating back to Albert Bandura’s work and before. (See Self-Efficacy for a primer.) I believe that the ability to accept yourself completely and to behave consistently is essential for mental well-being. (See How to Be an Adult in Relationships for more about acceptance.)

“It’s not cruel, it’s clear.” I’m paraphrasing a part of a parable told in Kim Scott’s Radical Candor. (“It’s not mean, it’s clear.”) The parable is about a dog owner, and the dog trainer that crosses their path. The dog trainer quickly gets the dog to sit by simply being clear and firm. We can’t use the same approach with people, but clarity of the message is valuable.

Too often, we err on the side of not being clear enough when we give feedback to others. We whitewash our response to not offend them, even when what they desperately want and need is radical candor. Those who are the most mature, leaders with the greatest potential, and the most amazing humans crave candid feedback about their ideas and their performance. To fail to respond with the feedback they request is to deny them the very thing they need most – but our fear holds us back and prevents us from being able to be truly present in the moment with them. Our fear for what they’ll think of us trumps their desire and request for feedback.

Feedback when uninvited or not part of a relationship can be cruel. It can be unwelcome and unwanted. We’ve learned that even when people ask for feedback, they don’t always really want it. They want someone to pat them on the back and make them feel good. We’ve learned that it’s safer to not give feedback – even when it’s called for. Somehow, we’ve accepted that the distress that we get from someone who has asked for feedback – and we provide appropriately critical feedback – is our fault. We internalize that we’re being cruel when that is not likely the case.

They call them labor pains, but they’re the signal that a baby is about to come. We experience pain when we exercise, but it’s in the service of improving our health, increasing our endurance, and growing our muscles. Pain is a negative feeling, no doubt. However, much about how we respond to pain is determined by how we view it. The more we view pain as a signal rather than a warning, the more likely we are to listen to it rather than fear or avoid it.

We are, of course, trying to avoid being hurt. We don’t want to believe that we can be hurt – or acknowledge that we must be hurt. We must hurt after an exercise to know that we’ve done it well enough that our muscles will be rebuilt stronger. It’s natural to want to avoid being hurt because of the feeling that it leaves us more vulnerable when, in truth, it only exposes us to the vulnerability that we’ve had all along.

Suffering is the pervasiveness of hurt. It’s holding on to the pain that should be let go of. Suffering is the choice of our response to pain and hurt. We can treat them as opportunities for growth and let go of the pain and hurt when they’ve taught their lesson, or we can hold on to them like a badge of honor. (See The Hope Circuit for more on the difference between post-traumatic growth and post-traumatic stress disorder, or PTSD.) We suffer when we fail to accept the pain. (Much of this view of suffering comes from Buddhist philosophy, which you can find out more about in The Trauma of Everyday Life.)

While the process of others holding us accountable is painful, it may be necessary to achieve the growth we desire.

The other side of disagreement can be a better relationship. This is the fundamental point of Crucial Conversations and an opportunity for all of us to find ways to make our relationships better through conflict – not worse.

For the most part in this review, I’ve side-stepped the disagreements that I have with Cloud and Townsend. However, I offer a few quick thoughts here.

I mentioned in my review of Changes That Heal that I felt as if Cloud had confused or conflated shame and guilt. Similarly, I think Cloud and Townsend here confuse suffering – which is optional – with pain, which is essential. Perhaps it’s semantics, but then again, so are emotions, which are broken into their component stimulus and assessment. Sometimes, there’s important clarity in the details.

The other key disagreement is about Matthew 5:39 – where Jesus instructs the listeners to turn the other cheek. I think that when you restore the historical context to his statement, you get the richness of the moment and the awareness of knowing another person’s true intent.

Despite the disagreements, you may want to make it your true intent to read Growth Has No Boundaries.

Book Review-Gamestorming: A Playbook for Innovators, Rulebreakers, and Chan...