Blog
You are here: Home1 / Blog2 / Book Review3 / Book Review-Why Are We Yelling?: The Art of Productive Disagreement 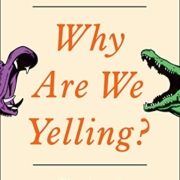 I stumbled across Buster Benson’s work through the cognitive bias codex – a listing of 200 or so known cognitive biases. That led me to his book, Why Are We Yelling?: The Art of Productive Disagreement. I’ve read several books on conflict and disagreement – and we teach on the topic – so I wasn’t expecting much. However, I was pleasantly surprised to find a coherent response to an intractable problem.

One of the largest things that we deal with when we teach conflict is to dispense with the myth that conflict is bad. Poorly handled conflict is bad, but conflict itself is what allows us to get better. We get better in our understanding and in the way that we work with others. When we handle conflicts poorly, we damage relationships, and we injure other people or ourselves. The key to learning how to view conflict more neutrally is learning how to address it more productively.

Benson’s second misconception is that arguments change minds. In the sense that we cannot, through our sheer force of will, change someone else’s mind, Benson is correct. However, at the same time, the appropriate application of conflict resolution techniques makes it possible to encourage others to reevaluate their choices and they can change their own minds. It’s a bit of semantics if you get right down to it.

His final misconception is that arguments end. His point is that often arguments don’t end, they’re buried underground. There’s an old joke about a man telling his therapist “Whenever we get into an argument, my wife gets all historical.” The therapist questions the man, “You mean she gets hysterical?” He replies “No, historical, she tells me everything I’ve ever done wrong.” In that sense, forcing an end to an argument causes it to move underground only to surface later whenever tensions are high.

Here, too, I think it’s about perspective. Some arguments end in understanding and acceptance. When that happens, people don’t tend to get all historical and bring up the past unnecessarily.

Before delving into the techniques for managing conflict, it’s important to acknowledge how we got here. We have conflict in our world, because we either hold different values from someone else – or we have a different perspective. That’s what we teach in our workshops. On the values front, we often start by referring to Jonathan Haidt’s foundations of morality from The Righteous Mind and continue through Steven Reiss’ work in The Normal Personality and Who Am I?. On perspectives, we generally teach Chris Arygris’ Ladder of Inference, and how we can all see the same thing and end up believing different things based on the data we extract, the meaning, assumptions, and beliefs we ascribe to that data. (See Choice Theory for more on Argyris’ Ladder of Inference.)

Benson’s refrain from the book is that biases cannot be avoided or eliminated. We must accept that they happen and work to compensate for them. While it would be nice if we could just cut them out, the reality is that it’s simply not possible. Biases exist because we need them to be able to cope with the massive amounts of information we have coming at us every day. (See The Organized Mind for more on our coping with information and Emotion and Adaptation about our ability to suppress our emotions.)

Benson believes that there are three things that can be going on in a conversation. It can be a conversation about what’s true, what’s meaningful or what’s useful. This reminded me of William Isaac’s work in Dialogue, in which he focused on power, meaning, and feeling. This was built on David Kantor’s work, which he continued in Reading the Room. There are many ways of viewing conversations and many approaches, but I find that helping people find ways to connect when it’s clear they’re missing each other is critically important.

One of my responses to conflict in general and in Benson’s work is that the key to conflict resolution both large and small is acceptance. Accepting that we’ll make mistakes. Accepting that others are imperfect, too. Accepting that there are different points of view that are equally valid. Accepting that we don’t—and won’t – have all the answers. When we can reach this perspective, where we’re certain in our uncertainty, we can begin to hear others. (See How to Be an Adult in Relationships for more on acceptance.)

In Jonathan Haidt’s Rider-Elephant-Path model, reason sits on top of emotion. (See The Happiness Hypothesis and Switch.) Here, Benson proposes that reason in a conflict sits on top of power. I’d probably adjust this to say authority, since power is broader and most reason is based on some underlying belief of authority.

I see this argument made all the time. “You can’t do X, because you don’t have Y certification.” I’m not saying that having some certifying body say that you know something or have been trained to do something is a bad thing – rather, I’m saying, what if they’re wrong? Reason is based on foundational assumptions. Sometimes those assumptions aren’t accurate.

But what happens if you can’t be convinced that the other person is correct? It comes back to accepting that we don’t have all the right answers. We simply disagree but commit to a course of action. Sometimes the process of continuing to fight things out is more painful and wasteful than trying either of the perspectives. So, we agree to try an approach, and we commit to it.

The big gap that exists in most organizations is the failure to commit to the decision. People leave the meeting and have the hallway meeting, where they already start to subvert the agreement and continue the argument even after they’ve agreed to agree. It’s like a cancer that grows from something small into something out of control. Unfortunately, it’s necessary to be conscientious when this behavior is seen, so that it can be removed quickly.

If you want to grow, discomfort is your food. Growth comes from discomfort. Whether it’s exercising to build muscle or it’s trying new things to expand your capabilities, discomfort is the breakfast food of champions. Taleb explains in Antifragile how the process of being harmed in the right way, in the right amounts, in the right timing can cause us to become stronger. By finding a level of strain that’s uncomfortable but not disruptively painful, we can find ways to grow.

This can happen as an individual or as a team. Marshal Goldsmith in What Got You Here Won’t Get You There and Jack Canfield in The Success Principles both implore people to be a little uncomfortable so that you can grow into something more.

The Australian aboriginal language of Dyirbal contains a category – balan – that includes women, fire, and dangerous things. (I discovered this through Ambient Findability.) Sometimes, the things that we need the most are the things that are the most dangerous to us. Sometimes, we just need to figure out Why Are We Yelling to figure out that we didn’t need to disagree at all.