Blog
You are here: Home1 / Blog2 / Professional3 / Adoption and Change4 / Book Review-Rebels at Work: A Handbook for Leading Change from Within 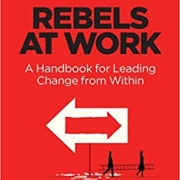 Someone must be there to initiate a change. They’re the ones who first see that the ship is sinking or realize there is land across the sea. The folks who go first are rebels. They buck the status quo in the attempt to make things better. Rebels often get a bad rap at work, because they fight against everything the organization is organized for: consistency. However, Rebels at Work: A Handbook for Leading Change from Within can help both the rebel and those who work with rebels harness the power of the rebel without being frustrated.

When Dorthey landed in Oz, Glinda the Good Witch asked her what kind of witch she was, and her answer was, “Who me? I’m not a witch at all.” Rebels must be conscious of whether their rebellion is being used well or whether it’s alienating them – and their cause. While there are positive, productive ways to be a rebel, there are also negative and potentially career-ending ways to be a rebel. Rebels at Work starts with a table of behaviors and attitudes that characterize good and bad rebels – with the obvious recommendation to be a good rebel.

The rest of the book sets out to explain how those behaviors and attitudes work for the good rebel and seeks to provide a toolkit that rebels can use to become more effective.

One of the rebel’s gifts is the ability to see the future. In some ways, rebels live with one foot in the future. They’re the people who were admonished by teachers for working ahead. Good rebels are constantly seeing what could be rather than just the broken.

In my junior high school career, I once found my way out of the classroom through working ahead. It was a science class, and the textbook wasn’t that great. The replacement teacher was reading just one chapter ahead of us and apparently not paying that great of attention. He introduced heat as an invisible fluid that flowed through things. Having read the next chapter (and a few more), I corrected him and told him that heat wasn’t an invisible fluid at all but was instead molecular kinetic energy. He wasn’t impressed. However, he was smart. He offered me the chance to play in the science lab area with some mildly radioactive materials that the school had for demonstrating Geiger counters. I loved it, and he loved not having me in the class to disrupt his teaching. It was an uneasy time and just one of many where my rebellious tendencies made my life uncomfortable.

The view of time in Rebels at Work is different than mine. I view differences in the way people see time from the point of view of The Time Paradox while they have a different source. However, that being said, the point is the same. Some people are past-focused, some are present-focused, and some are future-focused. Good rebels, it turns out, are largely future-focused.

Characteristics of a Successful Rebel

How can you spot a rebel when you see them? It turns out that they look very much like everyone else. What’s different is that rebels are curious, easily bored, creative, open-minded, skeptical, and flexible. However, the characteristics of a successful rebel include the perseverance and tenacity to see a change through. Rebels tend to be less disciplined, and since they’re easily bored, they’ll be ready to move on before the change in the organization is done. (See Grit for about the role of perseverance and tenacity more.)

A rebel’s effectiveness at accomplishing change in the organization is built on a foundation of trust. That trust is found both in the rebel themselves and in the idea the rebel has for making things better. Rebels at Work builds on the work of Trust Rules for the perspective on trust. I have a more nuanced view that is more accurately explained in Trust => Vulnerability => Intimacy and Trust => Vulnerability => Intimacy, Revisited.

Where Kotter in Buy-In focused on the kinds of objections that might occur from people who are in an organization (though the example is a public issue, not a corporate one), Rebels at Work focuses on four kinds of people you’ll run into in an organization who may be helpful – or harmful – in your attempt to accomplish change:

You’ll need to work with the organizational natives to get your change made, whether they’re actively resisting or they just seem like they’re in your way. The more you can focus your efforts on helping them meet their goals, the more likely they are to help you meet yours.

Rebels, for all their good will, need to accept their fate. In most cases, rebels won’t be marked fairly on performance reviews or considered impartially for promotions. Even when the rebel is right, they’ve made people uncomfortable, and that discomfort will linger in the air around a rebel. Rebels may be the ones drawing attention to the elephant in the room, but at some point, once people see the elephants, they’re going to see the piles that the elephant left behind.

Ultimately, rebels need the fortitude to stand up and lead people in the right direction even when that is difficult. That takes an unusual degree of integrity and fortitude, but it just might make or break your ability to be one of the Rebels at Work.