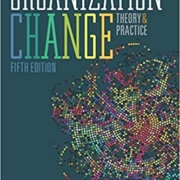 Many people have tried to understand and share their understanding about how organizations change. Some of these are scholarly enough to refer to studies and research to back up their claims. Rarely, however, do I find such well researched work that looks beyond the common quoting of historical research to find new meaning in old works – or to restore the original insights that have been washed away. Organization Change: Theory and Practice is a work that is rare among peers in that it is well researched.

The research performed at the Hawthorne Works outside of Chicago is well cited as an indication that you get impact by researching folks. It might also be called the observer effect – people will do more when they know they’re being watched. Beyond the lighting experiment that is so often quoted there’s something else that was happening. It’s something that seemed lost in all the hoopla.

Plenty of folks have shared pithy quotes that are similar to Peter Drucker’s “You get what you measure.” This certainly seems true of the research at the Hawthorne Works. They turned the lights up, and they got better performance. They turned the lights down, and they got better performance. It doesn’t make sense that the result you get improves no matter which direction you move the independent variable. That is unless you recognize that the change wasn’t the lighting – the change was that they were being watched.

Management and the Worker

What is often missed is that the studies of productivity and optimal working environments didn’t end with the lighting experiments – they began there. They set up numerous test rooms – isolated pockets where they could test other ideas. These ideas led to some of the earliest documentation that the relationship between management and the worker – and among the workers themselves – was critical to effective functioning. (See Management and the Worker for more.) The model that workers are cogs in a machine just didn’t work when they started testing ideas for how to make things more effective.

Who is Training Whom?

Taylorism wasn’t dead. Despite the fact that a major hole was punched in the way that people were supposed to behave versus how they actually behaved, Taylorism continued. One of the reasons may have been Taylor’s perspective that training the management is far harder than training the worker. In effect, Taylor saw that the workers were malleable enough to change where managers seemed to be resistant. This may have been due to their inflated egos (see Humilitas for more). It may also have been because they were on the leading edge of what Richard Florida would call The Rise of the Creative Class. In either case, the workers at Hawthorne Works found ways to adjust their behaviors to train the managers as much as the managers controlled them.

Complimentary to the Machine

The work at Hawthorne Works connects to the work of Toyota in Japan. They learned that they could make looms that notified the operator when a thread broke, thereby preventing poor output and signaling to the operator that their attention was needed. The Taylorism model finally died out as the Toyota Production System began to unwind the assumptions that were made in the Industrial Revolution about how to best manage things. (See Taiichi Ohno’s Workplace Management for more.)

Laws of Nature and Society

“The laws of nature are not the same as the laws of society; the latter can be broken, the former cannot.” In The Righteous Mind, Jonathan Haidt explains the difference between moral imperatives and social conventions. It’s a way to make sense of how the Jesuits navigated foreign worlds and how our perspectives have changed. (See Heroic Leadership for more on the Jesuits.)

Burke is drawing distinctions about the difference between a molecular reaction and the higher-forms like cells and, particularly, humans that make choices about how they interact – and how this may temper the wisdom of an organic model to change.

The challenge that I’d offer is that as much as we’d like to believe that if we put the right molecules together, they’ll eventually complete a chemical reaction, we ignore the fact that we’re dealing with the law of large numbers. (See The Organized Mind, The Black Swan, and The Theory of the Growth of the Firm for more.) There are some molecules that refuse to convert, but because most of them do and because we’re dealing with such large quantities, it appears as if they all do.

Similarly, cells behave in predictable, repeatable ways when you evaluate them in large quantities. As any scientist or statistician knows, the smaller the sample size, the greater the degree of error. (See How to Measure Anything for a pragmatic approach to managing the confidence factors.) When we’re working with humans, we’re generally dealing with much smaller quantities than when we’re thinking of molecules or cells.

Much is made of Darwin’s discovery of evolution, but little is made of the understanding that things are not so gradual as they appear to be. We forget that it’s all about random chance, and sometimes the conditions will just come up to create a rapid change. (See The Evolution of Cooperation for modeling of evolution.) It was Steven Jay Gould who focused our attention on the “punctuated equilibrium” concept, where things remain in a relatively steady state for a long time before something changes – and sometimes changes dramatically.

In our organizational change projects, the question becomes whether the weight of the need to change will overcome the forces that maintain the status quo. Are we in a period of change, or are we in a period of relative stability? Obviously, for the change manager or leader, the goal is to drive things to a moment of inflection – without pushing too far.

Good science – the kind created by solid research – may not always be what we need. The constraints of being able to isolate variables too often makes the results of the research and the science it creates unusable in a real world. At Hawthorne Works, they did their very best to isolate all the variables only to be confounded with the truth that all humans are variables.

As we’ve endeavored to create good science around organizational change, we’ve found that our efforts continue to be thwarted because people get in the way. The results are more experiments, more research, and very little usable progress on the kinds of things that real businesses with struggle with every day. The simplistic models that assume predictable behavior from human beings is flawed.

Change starts when we think about things differently. Lewin knew that we had to change our mindsets first – to unfreeze. (See Lewin’s model.) Those who deal with persistent personal change know the first thing that must change is the way someone thinks about the problem. (See Change or Die for more.) All change is therefore either just cognitive restructuring or at the very least starts with reorganizing our thinking about the change.

If you “must” do something, then you can’t change it. If a 4-minute mile cannot be run by a human, then it will be nine years before someone has the capacity to do it. (See The Rise of Superman for more.) After the 4-minute mile was possible, it only took 2 months for someone else to do it. It was all about the way of thinking about the time.

Espoused Theory and Theory of Action

During the nine years when no one could break the 4-minute mile barrier, if you would have asked runners, they would have said they were trying to break the barrier, but some part of them was not. Some part of them was scared at the prospect of actually breaking the barrier – and falling over dead, as was thought would happen at the time. There was a gap between what people were saying they were going to do and what they were actually doing. Immunity to Change encourages us to look for places where our actions aren’t matching what we say we want to do. Burke highlights this situation as a problem in change.

You may get people to outwardly agree that the change is necessary, but somewhere inside, they’ve not fully committed, and that lack of commitment shows up in ways that can’t be predicted.

Finding Assumptions by Looking for Their Shadow

On a sunny day, I’m looking for a parking spot. There are large SUVs and tiny Mini Coopers interspersed, and I’m trying to figure out which spots might be empty and which might contain a smaller car. The solution is to look for the shadows. While I can’t see the car itself, I can often see the shadow it casts on the pavement. No shadow? No car. It’s a hack for finding the empty spot – and avoiding those false starts.

Similarly, when we’re looking for the gap in espoused theory and theory of action, we can look for those things that should never happen if the espoused theory is the theory in action. Where we see them, we know that there’s an internal conflict that’s not been fully resolved.

Burke and a colleague, Litwin, developed a change model that identifies a series of factors and their interrelatedness. The factors of the model are:

It’s explained that these factors interrelate, with each one exerting force on the others. For a full analysis, see my summary of the Burke-Litwin model. For now, maybe it’s time to pick up Organization Change and see for yourself how the various aspects of organizational change are related to one another.

Book Review-Cynefin: Weaving Sense-Making into the Fabric of Our World
Scroll to top