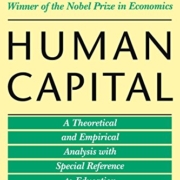 These days it’s relatively common to hear employees described as “human capital.” However, that wasn’t always the case. The term began to become popular in 1964 with the publishing of Human Capital, the work of Gary Becker. Before that, capital was limited to the things that could be accounted for in the accounting system. As it became clearer that not all increases in company performance could be accounted for through the allocation of capital in the form of machines and plants, the return on investing in people became more interesting.

It started as a study to understand the return on investment for college students. Would they recoup their investments in college as they went through their lives and careers? The answer, it turns out, is yes. The short version is that college educations is – on average – expected to return 11-13 percent on the investment. That’s a good return in almost any market.

However, the math behind this simple statement isn’t necessarily easy. The first challenge is that most of the cost of college isn’t the money you pay to the institution. About 74% of the cost of college comes in the form of forgone earnings. If you’re going to college, you’re not working or not working as much, and that has a huge impact on your cash flow, as any college student can attest to. Thus, the problem of calculating return isn’t the greater income received post-college minus the cost of the institution – most of the costs come with time investment.

On the plus side, the greater the education that you have, the less likely you are to become unemployed – and the length of your unemployment is likely to be shorter. So not only do you earn more but your earnings are more stable. That’s great news when safety and security become more important as you begin to raise a family.

Investing in the Family

There are dynamics to investing in education. Families with a larger number of children must, by the nature of dividing assets among children, invest less in each child than smaller families. However, there’s an educational lensing effect that causes families with higher educations to have more financial resources – and fewer children.

Because educated parents tend to have fewer children and higher resources, they tend to spend substantially more on each child’s education than those families that have less resources and more children. This is the educational equivalent of the “to the victor go the spoils” problem with systems. (See Thinking in Systems, Change Masters, and The Rise of Superman.)

It is for that reason that societies need to build counter-balancing loops into the educational system to ensure that everyone has a fair chance. Paul Tough speaks extensively about the college decision in The Years that Matter Most but focuses somewhat more on the connections and relationships than the quality of the educational experience.

Student loan default rates are – to quote Becker – “shockingly high.” The importance of government guarantees remains critical to ensure that banks are willing to lend for education. Compared to other loan types, the default rates are substantially higher. It makes no difference that the government has many ways to recover the loan amounts and they are difficult to discharge in a bankruptcy. Structurally, student loans remain risky propositions for the lender.

However, there are also non-loan options, including grants and scholarships, that may apply based on a student’s financial need or their academic or athletic talents. These can offset some, but often not all, of the expenses that a student can expect to face.

From College to Corporation

While it’s a fine answer to say that individuals, students, should invest in their education and that this has a marketed change in the capacity to make money, there’s a challenge that corporations face with education that individuals do not. Individuals always reap the rewards of educational investment. The question is whether corporations can reap the rewards of training employees, since employees can leave.

Don’t Train Them, and They Stay

The original quote is attributed to Henry Ford: “The only thing worse than training your employees and having them leave is not training them and having them stay.” Richard Branson’s approach is, “Train people well enough so they can leave, treat them well enough, so they don’t want to.” While Branson separates training them well and treating them well, they’re related. The more people recognize that their personal improvement is important to the organization, the more that they will feel valued and not want to leave.

The heart of the concern for corporations is what happens when the capital – their human capital – walks out the door – for good. This concern has spawned great expenditures in knowledge management with the idea of maintaining the knowledge in the organization even if the employees leave. (See Lost Knowledge and The New Edge in Knowledge.) The classic modeling provided by Becker presumes that employees are being paid less during their training and the amount that the lower pay factors in the investment that the company is making on training. At the time of their graduation, the scales may not be equal but over time, the organization makes back its investment in the employee (owing to lower rate and now greater productivity). When that payback is complete, in theory, the organization raises the employee salary to one more commiserate with the productivity of the employee.

Another consideration for ensuring that the knowledge doesn’t walk out the door is to implement a delayed vesting system for pension or retirement accounts, so that employees are encouraged to stay with the company until they’re fully vested.

A different type of investment in employees is to invest in their physical or emotional health. Physical health programs – called wellness programs – are beginning to be more common but are most often implemented to help defray higher healthcare costs. While companies offered physical health benefits prior to this, including on-site gyms and stipends for gym memberships, they were nowhere near as prevalent as they are today.

Emotional – or mental – health is often overlooked. While many larger organizations have employee assistance programs, the statistics indicate that less than 5 or 10% of employees use those benefits. The benefits themselves are also structured as break-fix rather than wholistic care. While some organizations are improving their wellness programs into emotional health, this is still a rarity. We know that up to 80% of our healthcare costs are driven by poor behaviors – often emotionally compensating behaviors – and yet we focus very little time on mental health. (See Change or Die for more on the impact of mental health on physical health.)

The problem with the development you put into humans is it’s completely illiquid. You cannot extract the information out of their brains, and we outlawed slavery some time ago. As a result, we must accept that, while we have human capital, it’s different than other kinds of capital. Perhaps the best thing that you can do to invest in your own capital is to read Human Capital.