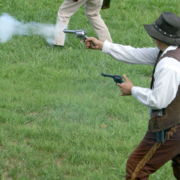 One of the biggest challenges in statistics – and problem solving – is proving causality. Correlation is a simple statistical formula. Causality is much, much harder to tease out and it’s at the heart of what’s wrong with calling foul because someone else triggered you. It implies that someone else has control of your feelings and therefore you’re a victim.

Most days, I don’t feel like I’m in control of my feelings – let alone anyone else. They seem to wash over me like waves lapping the shores of the ocean. Sometimes a big wave comes up and catches me by surprise – what my friends in Iceland would call a “Deadly Sneaker Wave.” Other times, the waves are so calm they seem to be rocking me to sleep and perhaps even singing a lullaby from my childhood.

Without a doubt, the environment and, particularly, other people influence us. Kurt Lewin said that behavior is a function of both person and environment. His statement holds true even for our emotions. We have, in ourselves, our history and experiences that lead us towards emotions and behaviors. Our environment can shape how we respond. Neither can be taken in a vacuum, but, ultimately, we must be owners of our own emotions.

Lisa Feldman Barrett took on the challenge of How Emotions Are Made and concluded that how we feel is the interpretation of the events. This is consistent with Richard Lazarus’ view in Emotion & Adaptation that we form our emotions – they don’t come out of nothingness. Together, this means that our emotions aren’t directly the result of external triggers but are instead the result of the complex interaction of our beliefs, our values, our perspectives, and our experiences.

When you think about the path between the trigger of a gun and the rush of lead out of the barrel, there are mechanics involved, but none of those mechanics have the capacity to stop the bullet – presuming that the gun and bullet are functioning properly. It’s the simplicity of logic that A + Time = B. That’s what a trigger is. It’s causal. However, in the case of emotions, it’s not causal at all.

It may be an okay place to visit, but it’s a lousy place to build a home. It’s the best explanation I can give for the mental space that Kurt Lewin called topological psychology. (See Principles of Topological Psychology.) Topological psychology is concerned with how people get from one state of mind to another. It’s concerned with how people can move from being a victim to finding strength – and what happens when they don’t.

In victimhood, we necessarily feel powerless. Someone did this to us, and we can’t do anything about it. Therefore, we are powerless. If you look at Marty Seligman and his colleagues’ work over the past five decades, you’ll find The Hope Circuit. When the situation was initially discovered, they called it “learned helplessness.” It was the ticket to victimhood.

When you developed learned helplessness, the story goes, you wouldn’t help yourself out of any situation. Even when you could take actions to reduce or eliminate pain, you wouldn’t, because to do so would be unthinkable. The subsequent research and the ability of enhanced diagnostics led to the awareness that those with learned helplessness didn’t learn something at all. They failed to learn about their degree of control in their situation – and therefore they didn’t learn that they could get out of the situation.

Where did the idea of an emotional trigger come from if it’s so different than the direct, causal line that the word was originally intended to mean? The answer is that it came from psychologists struggling to address the challenges of mental illness, including addiction.

The word “trigger” in the Diagnostic and Statistical Manual of Mental Disorders (DSM), which is the bible for diagnosing mental disease, is always used in reference to initiating an episode. Whether it’s the triggering event for a Post Traumatic Stress Disorder (PTSD) patient or the latest relapse of an addict, it’s something that almost always causes a negative episode.

Animals are, by their nature, antifragile. That is, they get stronger with the right kind of stresses and challenges. Our muscles grow as we destroy them. Adversity, challenge, and stressors are necessary for survival. Sea turtles need the struggle to find the ocean. Chicks need the effort of breaking from their shell and we need to find ways to push our emotional boundaries to grow more resilient. Nassim Nicholas Taleb dedicated a whole book, Antifragile, to helping us learn this important concept. However, it was the work of Albert Bandura that connected the idea of antifragility to emotions and mental disorders.

Phobias can be debilitating. It’s one thing to be afraid in a dark alley but something entirely different to be afraid to leave your home in a safe neighborhood during the day, with friends, to a well-known spot frequented by policemen and policewomen. However, there are those for whom the fear of going out is overwhelming. Bandura’s work was with people who had a phobia of snakes. Not the kind that startle you as you are walking in the woods but rather the kind that people keep as pets.

The technique he developed essentially relies on creating zones of safety that move closer and closer to the source of the phobia. First perhaps you talk about snakes, then look at a picture, watch someone across the room with a snake, and so on until you’re holding a snake. (Bandura has other work as well, including Moral Disengagement, that’s interesting.)

Amy Edmondson has focused her research on creating psychological safety. That is, she tries to make people feel safe in their environments – emotionally. However, the irony of the creation of safety is that it must be coupled with accountability and concern. (See The Fearless Organization
for Edmondson’s work.) Kim Scott in Radical Candor is a bit more direct. She says that holding people accountable isn’t cruel, it’s clear.

In that clarity, there’s the ability to silence the inner voice of doubt. We sometimes confuse safe zones by thinking that they’re not places where you can directly challenge someone. However, the truth is that the way people are challenged is critical in the same way that stresses are critical to any developing animal. It has to be the right time, in the right way, with the right intent. With those pieces, it’s possible to not only create a safe zone for today but to create the kind of healing that Bandura, Taleb, and Seligman are encouraging.

But what about boundaries? Shouldn’t I be able to say what other people can and cannot do to me? This is perhaps the fundamental misunderstanding of Cloud and Townsend’s work in Boundaries. People have confused the idea of boundaries, which was intended to discuss what someone themself will and won’t do, with what we believe that others should and should not do to us. When someone says, “Well, he can’t talk to me like that, I’m drawing a boundary,” they’ve missed the point. They’re trying to control someone else’s behavior. (For controlling other’s behavior, see J. Keith Miller’s work Compelled to Control.) A similar statement would be “If you continue to talk to me, I’m going to hang up.” In the second case, the person is describing their behavior, not someone else’s.

This reversal is at the core of the problem with people who believe that others are triggering them and that they must stop.

It was a twelve step-based program designed to help teach people life skills. It collected people who had officially recognized addictions and those addictions that aren’t officially recognized. It also included those who were struggling with a major life event, including things like divorce, estrangement or death of a child, and any form of human suffering you might imagine.

I was supporting the audio and video production when the manager of the program came to me to talk about triggers. Stacy is an amazing individual who could balance the needs of people and recognize when things had gone too far. Someone had complained about a music choice and some of the words that were upsetting to them. (The irony was that we were in a church, and the music was from a Christian artist.)

We discussed it as she made me aware of how someone had interpreted the music, and then we both moved on. Unlike what’s happening in too many places, we acknowledged the concern and recognized it as a function of this person’s dysfunction, and as a result made no changes. Stacy could go back and tell the person that we had discussed it – because we had – and she could move into the place of talking to the person about how to heal from their hurt.

When I started the song – even if I had paid attention to the particular lyrics – I couldn’t have predicted how one woman in the crowd could have responded. There was no way of knowing how her unique pain and experiences would be translated into her emotions.

I don’t know whether the woman continued to participate in the program – but either way, she did the right thing for her. She had to figure out how to better manage the emotions that were being stirred inside of her or not be there.

It wasn’t our responsibility to prevent people from feeling emotions or to suppress every possible trigger. It was our responsibility to be respectful and continue on – inviting her to set her boundary to not come or to decide to become more antifragile and desensitized by experiencing a safe space that had the occasional troubling, but not harmful, thought.