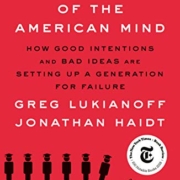 I use pink to highlight those passages of text that I disagree with. My notes from The Coddling of the American Mind were a sea of pink highlights. Normally, this means that I struggle with what the authors are saying. When I look back at The Marketing of Evil, I found a sea of pink as well. However, I’m a fan of Jonathan Haidt’s work, so to disagree would be odd. (See The Happiness Hypothesis and The Righteous Mind.) It turns out that the passages I’ve highlighted in pink are those that Haidt and his coauthor Greg Lukianoff struggle with as well. They are the genesis of the challenge the authors have with what’s happening in colleges and in America.

Every society is in a state of constant flux. Things shift in the long arc that are often difficult or impossible to see in the small arc. Robert Putnam notes in Bowling Alone how we are less likely to be a member of a group and in Our Kids how parenting approaches are producing different results in our children. Sherry Turkle in Alone Together describes how our reliance on technology for interacting with others has made us less likely to engage in deep and meaningful ways. In Finding Flow, we see hints that Dr. Spock, who famously wrote Baby and Child Care, reconsidered his permissive approach to parenting.

The disturbing trend that prompted the book, however, seems to be playing out in the very place that is supposed to most prevent it from happening in the first place.

Colleges and universities are supposed to be places of great scholarship and debate. Indeed, it’s debate that generates scholarship. It’s the process of productively disagreeing with others that increases our own understanding and contributes to our world. It’s the best of what our universities offer, but it’s under attack. We’ve become so concerned that the words we write or say may unnecessarily trigger others that we don’t say the things that need to be said and don’t write the words that should be etched into eternity.

We notice it when people redefine violence as harm. Instead of violence being reserved for willful, intentional harm, it’s allowed to be broadened to those things that others simply find offensive. The argument goes that because offensive materials cause stress and stress causes harm, they must therefore be violence. This is a summary of an article that was written by Lisa Feldman Barrett, who wrote How Emotions Are Made. I struggled with her work then – though most of the struggle never made it to the blog post – and I am appalled at the implications of this line of thinking now.

Before I even finished The Coddling of the American Mind, I had to write a post about becoming emotionally triggered. It’s real. It’s a challenge – and it’s necessary. (See Trigger Happy.) While I struggle with the fact that Charles Duhigg fundamentally missed some of the key points of the very research that he was quoting in The Power of Habit, I acknowledge that he has an appropriate degree of focus on finding the triggers that start the cycle that lead to habits.

Finding how you’re triggered by your environment and making changes to eliminate, reduce, or mitigate those triggers is one important aspect of addiction recovery. For example, alcoholics remove all alcohol from their home when they can. They avoid meeting people in bars – particularly bars where they have a history of abusing alcohol. However, there’s an important and often missed aspect of the need to reduce triggers: responsibility.

Psychologists call it “internal locus of control.” Said differently, it’s taking responsibility. It’s not always easy to admit you’ve made mistakes, and sometimes it’s even harder to accept that you’re your own worst enemy when it comes to avoiding poor behaviors. However, it’s also critical for your mental health. If you can’t take responsibility for your situation, then you can’t change it.

Marty Seligman and his colleagues discovered something odd in the late 1960s. If dogs were given a mild shock and prevented from escaping it, they wouldn’t even try to escape it in a situation when they could. They called it learned helplessness. (See Flourish.) Decades later, the advent of fMRI machines led one of Seligman’s colleagues Steven Maier to the opposite conclusion. It wasn’t that the dogs learned helplessness. Instead, they failed to learn control – or influence – over their situation. (See The Hope Circuit.)

The issue of control – or influence, since true control is an illusion – is what responsibility gives us. (See Compelled to Control for why control is an illusion.) If we take responsibility for managing our own feelings, then we can manage our feelings. If we believe that others control our emotions through their actions, then we’ll be unable to change our outcomes, and that means we’re always looking to make our lives – and the lives of others – easy instead of making ourselves and others capable of handle what life throws at us.

Folks like Rick Hansen speak of resilience in Resilient, and Angela Duckworth talks about it as Grit. The most common way to think about it is developing character. We all believe that we want to develop character in our children – but struggle to figure out ways to do it. Books like Robert Lewis’ Raising a Modern Day Knight offer some ideas but fall well short of a practical guide. Judith Rich Harris’ work in No Two Alike and The Nurture Assumption call into question a parent’s capacity to instill character into their children. It seems like character development is the hard work that no one wants to talk about directly even while experiencing a tragedy of ethical issues. (See How Good People Make Tough Choices.)

There’s a disturbing trend that started a few decades ago and has apparently managed to trickle its way into university. It’s called “helicopter parenting,” because the parents are constantly hovering then swooping in to save their children from any harm. Michael Gurian argues in Saving Our Sons that we need to have some degree of rough and tumble life but that parents are depriving their children of these experiences.

Please don’t misunderstand. I’m not saying that parents should never support their children or stand with them when they stand up to oppression. I’m saying they shouldn’t always stand with them. Sometimes, it’s important to stand back and watch what happens. (See my post Where the Consequences Live for more.)

John Duffy in The Available Parent walks the line of recommending more interaction with your children and avoiding the tendency to become overly involved. It’s true that children need discipline and structure, and as a generation of parents, we’ve deprived our children of the discipline they need.

Randy Pausch’s last lecture became very popular. (See The Last Lecture book review for more.) At Carnegie Mellon University, there’s a tradition of making your last lecture a big thing. It’s normally reserved for retiring professors. In Randy’s case, he was retiring – but due to a terminal pancreatic cancer. His lecture was a message for his children. He knew that he couldn’t survive to send them the strong, encouraging, and corrective signals they’d need. Instead, he used his last lecture to encode as much of his wisdom as possible in the awareness that the lecture was likely to survive the sands of time until his children had a chance to absorb it.

He minced no words when he explained that he was saddened by the degree to which kids are coddled and how they’re not taught the value of hard work. The book was published in 2008, and it seems like now we’re dealing with our young adults the outcomes of the coddling that Pausch was worried about over a decade ago. If you want to learn more, you may want to read The Coddling of the American Mind.