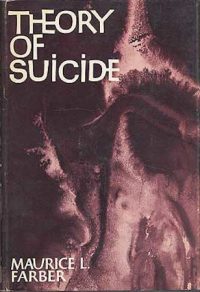 In suicide, man uses his power and intelligence to destroy that power and intelligence.  In doing so, he removes his sadness and desperation and replaces it with the suffering and grief of those who cared for him.  So starts the journey into Theory of Suicide.  It’s a journey to understand how people ultimately decide that suicide is the right answer.

Two relatively small Western European countries, separated only by Sweden, have radically different suicide rates.  At the time of the book, Denmark lost roughly 20 per 100,000 people to suicide, where Norway only lost 7.  How is it that there could be such a remarkable discrepancy between two countries that are so close?  That set up Maurice Farber’s study of the two nations and the differences that might explain the radically different rates.

Farber was a student of Lewin’s who participated in a study of prisoners that revealed that their suffering was inversely related to hope and related to the structure of their future outlook.  The more hope they had, the less suffering they experienced.  Viktor Frankl explained in detail how hope and outlook were related to surviving the concentration camps in Man’s Search for Meaning.

The short version is that hopelessness shows up time and time again as a key predictor of suicide – even more than depression.  That makes finding ways to generate and sustain hope a key part of preventing suicide.  On this, C.R. Snyder has ideas in The Psychology of Hope, which are summarized in the ability to develop willpower and waypower.  Willpower is its own discussion that Roy Baumeister covers in his book, Willpower.  Waypower is Snyder’s way of saying know-how.  (See Kate Pugh’s book Sharing Hidden Know-How for more on that subject.)

Farber conceptualizes an equation where hope is a sense of competence over a sense of threat.  However, it’s my experience that Snyder’s representation of hope is more accurate.  What Farber expresses as hope, I frequently flip over as stress – and expand a bit.  First, we have to recognize that though the environment around us contains stressors, it’s our assessment and reaction that generates stress.  (See Emotion and Adaptation for more on our assessment being critical, and Why Zebras Don’t Get Ulcers as a comprehensive guide to stress.)  Flipped over, there are two aspects of a stressor that increase the likelihood and degree of stress.  The first is the probability of the stressor having an impact, and the second is the size of the impact.  These two factors are divided by our ability to cope.  Coping itself comes in two forms: internal coping that we provide ourselves, and external coping, which is provided through others as support.

It’s important to understand that stress negatively impacts our ability to see alternatives.  (See Drive for more on this constriction.)  It’s well understood that suicidal people often experience the same kind of cognitive constriction we see in people experiencing stress.  (See The Suicidal Mind.)  It shouldn’t be a surprise, because suicidal people are also described as ambivalent.  That is, they are caught between conflicting desires to be alive and to be dead.  They are caught in a conflict in their assessments of what the best alternative is.

Perhaps the most concerning bit in the theory of suicide is the gradual buildup of emotional debris that eventually pulls people under.  The theory is that people commit suicide after a long period of continued chipping away at their natural resilience.  Instead of becoming stronger like in Antifragile, they’re slowly beat down.  That is, they learn to be helpless, and their one final act of desperation is to demonstrate that they do still have one act they can take that is impossible for others to prevent.

An aspect of this build up may be the labels that people initially hear from others and ultimately begin to accept and apply to themselves.  If you hear that you’re worthless enough, you’ll eventually internalize it and begin to believe it.  (See Mindset and I Thought It Was Just Me (But It Isn’t) for more.)  The problem is that these labels continue to work their way into your psyche and weigh on you long after those who initially applied the labels are no longer in your life.

Sometimes it’s not even a label that is applied, instead it’s just the sense that you’re defined by your wounds.  You’re not a person with diabetes, you’re a diabetic.  Your weaknesses begin to define your self-image and what you believe.  You think about what you can’t do more than you think about the things you can.

Ultimately, this may cause you to become a victim.  Everyone is victimized at times.  Everyone can feel like they’re a victim.  It’s called victimhood, and it’s an okay place to visit, but you shouldn’t build a house there.  Defining yourself as a victim necessarily takes away your power and makes it difficult to move forward.  (See Hostage at the Table for more on victimhood.)

Just After the Depths of Despair

There’s a general awareness that there’s a relationship between suicide and depression.  However, what’s not well known is that the riskiest time for suicide is when someone is recovering from depression and their lack of drive (technically called psychomotor suppression) that comes with depression releases sooner than their feelings of gloom.

First, it’s important to note that the rise of interest in SSRI medications has led to a preponderance of people who have some degree of depression diagnosis.  Any statistical relationship between depression and suicide may have been obliterated by the propensity to open the medicine cabinet any time anyone feels the slighted bit down.  (See Choice Theory and Warning: Psychiatry May Be Hazardous to Your Mental Health for more.)

Second, few people realize that depression is accompanied by a lack of drive.  Some depressed people, in the bottom of their depression, just can’t become active enough to be bothered to work up the energy to attempt suicide.  This is one of the reasons why it’s important to limit access to lethal means for a suicide, because depressed people are unlikely to work too hard to make the attempt.  This is perhaps one of the reasons why if a desired suicidal approach is thwarted, few people convert to a different form.

The power imbalance between children and parents can be a trap.  If parents aren’t giving children what they need, it can be difficult for the children to speak up directly to explain how their needs are not being met and instead they may act out in a variety of ways.  The most tragic is, of course, to commit suicide.

Human children require the most support of any mammal.  If they fail to get the support they need during their early development, they’ll experience problems later in life.  Whether the study is about the impact of rat mothers licking and grooming their kids or not (see The Globalization of Addiction), how fetal development can lead to adult disease (see FOAD in Why Zebras Don’t Get Ulcers), or even how Adverse Childhood Experiences (ACE) impact a child’s outcomes much later in life (see How Children Succeed), there are plenty of indicators that children need the support of their parents.  When they don’t get it, there are bad outcomes throughout their lives.

The process of cause and effect is easy.  It’s easy, because it’s simple.  It’s easy, because it’s what we expect.  If we do A, then we get B.  Unfortunately, our world isn’t like that.  The Halo Effect explains that we live in a probabilistic rather than deterministic world.  That is for the most part because there are no straight lines between A and B.  It’s better to say that A leads to B in 99% of the cases but rarely leads to B when C is present.  We often fail to see the hidden systems that are operating that move A towards B – and what can break in these systems.  (See Thinking in Systems for more on systems thinking.)  More problematic is the law of unintended consequences.  The Diffusion of Innovations recounts the story of steel axe heads introduced to Stone Age Aboriginal people and the resulting disintegration of society and rise of prostitution.

What we realize as we look for causes of suicide is that the “causes” are rarely direct.  Instead, there’s a continual rolling of dice, and eventually snake eyes comes up through no particular fault of anyone – it just happens.  There are, of course, causes, but they’re obscure and nuanced.  They’re impossible to identify beforehand.

There are some factors that seem to clearly lead down a path that may mean suicide.  Deprivation of attention and care during childhood seems to set people upon a road of believing they’re never good enough or that they’re unlovable.  This perspective on life leaves them constantly wondering whether they’ll be abandoned or not.

Abandonment, as I mentioned in The Deep Water of Affinity Groups, was historically a death sentence.  There’s an irony that the thing they seek to avoid is the very thing they pursue by their own hand, but the irony is lost.  As many have said, often people believe that to control the ultimate fate is the last grasp a power.

It seems like everyone has their ideas about what causes suicide.  Maybe by reading you can develop your own Theory of Suicide – and discover a way to stop it.