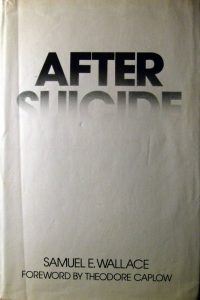 It’s unthinkable.  The loss of a spouse, child, or loved one.  It’s even more unthinkable to know that the death was the result of a suicide.  After Suicide follows 12 widows who lost their husbands.  It walks the twisting road of their relationships, how their husbands ended up dying by suicide, and what they did after that.

The Weight of Marriage

The design of the study was explicitly one of a marital relationship, and it revealed the weight that was placed on the relationship by both parties.  As I mentioned in Anatomy of Love, our relationship with marriage has changed.  There was the belief that women needed to get married.  There was the sense that, without a marriage, a woman wasn’t safe.  This came out in more than a few of the stories.

It was also clear that the marriages these couples experienced weren’t always the best.  In some cases, the marriage was the façade.  They were “playing house” instead of being connected and working together.

For men, there seemed to be a higher focus on their money-making career; for women, the quality of their marriage seemed to be more important.  Some of this may be a reflection of historic roles, but it may also reflect a fundamental difference in approach.  That being said, the loss of perceived value seemed to lead more or less directly down the suicide’s path.  Joiner’s awareness of burdensomeness as a factor in suicide is clear.  (See Why People Die by Suicide.)

For some, the sense of worth was driven by the need to be needed.  In a sense the opposite of burdensomeness, they needed to know that they added value by the way that they supported others.  This seemed to provide some protection against the question of inherent worth.  If they were valuable to another, then they had to have value, and there was no need to explore the inherent value question.

Not every woman was so lucky.  Some remained stuck in a codependent relationship where they were taking care of the husband’s addictions and compensating for his weaknesses.  In some cases, this created a sick cycle where her actions would trigger him and vice versa.

A Series of Deaths

One of the ways that life is perceived is as a death of who we are now so that we can become someone else tomorrow.  This is a great perspective if you’re looking at growth but is a bit dangerous in that it connects growth with concepts of death and may be part of how people decide that they will somehow gain life through their own death.

It’s true in some sense that the caterpillar dies to become a butterfly; however, it’s also true that they are the same no matter how different they appear on the outside.

Growing in the Same Direction

One of the challenges after a divorce is that your perspective on marriage changes.  (See Divorce for more on divorce.)  In some cases, the women in the study recognized that it’s important that both parties in a marriage grow but that they grow in the same direction.  It’s not good to have one person growing to the east and the other growing to the west.  It only serves to separate people.

There’s a certain pragmatism post-divorce that you can live without another person, and as a result you stay in the marriage, because it’s good for both of you.  It’s a good perspective, but also one that’s difficult to reconcile in every situation.  It’s hard to hear that “I don’t have to have you” and know they mean “I want to be with you, but I don’t have to be.”  It requires a degree of self-awareness to hear the meaning behind the words.

In the stories, there are both similarities and differences.  We can’t summarize how suicide survivors (those left behind) will feel or behave after the act.  We can make some generalizations about loss and grief but ultimately the context and framework of the relationship is unique and therefore there is no way of stating what people must be feeling.  Instead, all we can do is find ways to accept, identify, and understand with survivors After Suicide.