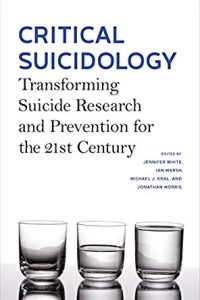 Critical Suicidology can either refer to the critical need for people to become more versed in suicidology or being critical of suicidology’s progress – or both.  While suicide rates vary country by country and year by year, they’re climbing and globally are at about 16 per 100,000 people.  That’s a tragedy that generally lands suicide in the top ten list of mortality in the United States every year.  However, because of the stigmas associated with it, it’s often underfunded, poorly understood, and, in some cases, even taboo.

The research that is published in the various journals that cover suicide is woefully insufficient to move the study forward.  There are many quantitative studies but few studies of interventions.  Too many rehash the same associations that are already known.  People who abuse alcohol and those with depression are at greater risk of suicide.  There is the continued repetition of the sociological impacts to suicide.  Older white men beware, because you’re at the greatest risk – but, of course, that isn’t something you can directly intervene to change.

Critical Suicidology has a strong emphasis on the need for more qualitative research.  I agree in part but certainly not to the degree proposed.  The key isn’t in what there should be more of but rather what there should be less of.  It’s too easy to process the statistics available and translate them into risk maps based on useless, relatively unchangeable criteria.  The proposal for qualitative research is to increase understanding of what the drivers are – instead of just repeating an endless stream of numbers.

On this point I agree; however, I think that the better option is to find approaches to interventional testing to see if what we already know can be operationalized into solutions.  We know that Toxoplasma gondii reduces rats’ fear of cat urine, and that it infects 30-40% of the world population.  We have simple tests and treatment.  It would be great to know if we can reduce suicide by simply treating a parasite that causes us to lose our fear of death.

Maybe it’s a good idea to take the fMRI research that identifies activation patterns in the brain that seem to lead to suicide and convert them to be used with qEEG machines, which have a substantially lower cost both in terms of acquisition as well as the time to get to a result.  In less than 15 minutes, we should be able to identify the patterns that seem to lead to suicide.  If we can identify these people, we can get them into treatment.  If part of the problem is brain activation patterns, we can teach meditation and mindfulness to change those activation patterns.

We know that serotonin, cortisol, and are low cholesterol all are correlated with suicide – maybe we can use artificial intelligence to discover relationships with these three indicators that give us a good sense for who is at risk for suicide.

While I strongly support the need to get better ideas about what the root causes are and even agree that qualitative studies are the best way to get at these, I believe that the greatest need is interventional studies to see if we can apply what we already know more broadly.

It’s true, as the book says, that we need to understand what our research goals are before we can choose appropriate methods to answer them.  I think we can always gain more clarity, but in general, we know that we must solve the problem of detection and the problem of protection.  We, of course, need to learn in more detail how we’re going to accomplish this.  However, I think we’ve got plenty of things queued up for appropriate interventional research.

A key point that leads to wanting more qualitative research is the fact that many people with the identified risk factors – like depression and alcoholism – don’t die by suicide.  Many don’t attempt suicide.  If these are causal factors, then why do so few with the conditions go on to attempt or complete suicide?

It’s my belief that we’re talking about a recipe that needs to have certain ingredients that come together at the right times to end in a tragic result.  Consider making bread.  Most breads require flour, sugar, water, yeast, and salt.  If you have all of these – plus the special things called for in specialty recipes – then you can make bread.  You must have enough of all these.

Maybe depression is a key ingredient, but all of us have some degree of sub-clinical depression (without even accounting for the fact that depression diagnosis continues to rise).  Maybe having a clinical level of depression makes it easier to get the right ingredients – but the question remains what are the others?

What makes a situation intolerable?  Many people who struggle with chronic pain find ways to manage it and don’t fall into hopelessness and suicide.  Others who suddenly feel vulnerable for the first time – or the first time in a long time – find the situation intolerable and resort to suicide.  Certainly, the answer to tolerating the world is the development of coping skills.  However, what coping skills are they, and how do we ensure that people know how to appropriately deploy them?

If we want to reduce the rate at which people find themselves in intolerable situations, we can start first with coping skills.  But in the spirit of social justice, we should evaluate the situations under which we could prevent the situations that require coping skills.  We can’t prevent the tragic death of someone close to us through accidental or homicidal means, but we can address systemic persecution and victimization.

Suicide is the Solution

Suicide is often framed as a problem to be resolved – and appropriately so.  However, there’s a different conceptualization of suicide that may make it easier to work with.  What most people fail to realize is that suicide is a solution.  It is a solution to the problems the person believes they have.  It may be a bad solution, the wrong solution, etc., but for them, it appears to be a solution.  Understanding this framing gives us the opportunity to look backwards into the causes that make people’s life so unbearable that suicide seems like the right option.  In The Suicidal Mind, Shneidman describes suicide as an escape from psychache (psychic pain).

In some societies, however, suicide is a reasonable option.  When someone is elderly and feels as if they’ll become a burden to their kin, they can choose suicide as an option.  In some places in the United States – under strict regulation – there are laws which allow for others to support someone’s suicide.  We approach suicide as if every suicide should be prevented, but there are many cases where the alternative is worse than death.

Should I Say or Not

The tragic news is that 70-80% of people who die by suicide do so after having told someone about their intent.  Those people didn’t know how to respond in a way that helped the person survive.  We should better equip everyone to support others when they’re suicidal.  However, it’s equally tragic that 20-30% of people who are considering suicide never tell anyone.  They don’t help others understand their struggles so they can share it and help lessen the load.  They believe that they are alone and don’t reach out.

There’s certainly an aspect of this that is the impulsivity that some have when becoming suicidal.  There’s also an aspect, I’m sure, of how safe people feel to express their thoughts about suicide.  What might happen to them if they do share their thoughts?  All of that leads people to not share their thoughts of suicide and instead suffer alone.

Of those who heard of the plans for suicide and weren’t able to help enough, there are some who will minimize the concerns or blow them off.  They think, incorrectly, that if people want to suicide, they’ll do it.  They won’t just talk about it.  (See Myths About Suicide for more.)  Even if they’re serious about the attempt, they may minimize the situations that lead the person to feel as if suicide is the answer.

Never having been trained in techniques like Motivational Interviewing, they don’t realize that it’s important to validate someone’s experience before convincing them that they can change the way they see it.  In short, the suicidal person who often believes they need to be heard feels even more disconnected.

They’re called defining moments because they are the moment that define our lives.  The problem is that people are all too quick to call a death by suicide a defining moment.  Too many people who die by suicide have their suicide labeled as their defining moment instead of looking at the best they had done or the totality of their life.

For many, the tragedy of suicide follows a sense that they’re can’t ever be enough.  There is pressure to perform or to conform to other standards.  The result is an unsolvable stress.  Too many people who die by suicide are high achievers who have standards that they can never meet.  The result is they do amazing things their entire life and, in their desperation, end up believing suicide is the answer, and people then define them by their desperation instead of their achievements.

A diagnosis – of any kind – feels like an inescapable label.  Someone stamped a label upon you, and it won’t peel off.  However, one of the insights from Critical Suicidology is that diagnosis exists not on you but in the space between you and the person that tried to apply the diagnosis.  While a great deal of progress has been made on repeatability of mental health diagnosis, they’re still rather subjective in most cases.

Furthermore, the implications of the label aren’t well articulated.  People believe that the diagnosis means something that it may – or may not.  When we’re considering how other perceive us – which is what a diagnosis is – we should consider that it’s their perception that will have some degree of truth and some degree of fiction about us, and the same goes for the person making the diagnosis.

Meaning in the Suffering

Everyone has suffering.  Buddhism and Christianity both share stories that comment on the fact that everyone has suffering.  They leave little doubt that there is suffering in every life.  However, what’s different is how people respond to that suffering and find meaning in it.  For some, the meaning is divine intervention, something that God has willed.  For others, it’s a newfound calling, something that becomes a new purpose.

In twelve-step programs, one of the keys is service so that people can leverage their pains to support the growth of others.  (See Why and How 12-Step Groups Work.)  If you want to help someone avoid suicide, the right answer may be to place them with others who are potentially suicidal so they can leverage their experiences to help others.

No matter what factors in life have led to your having been hurt, it’s your responsibility to heal yourself.  You must do whatever must be done to accomplish the healing, so that you’re not hurt as easily again.  (See Hurtful, Hurt, and Hurting for more.)  Perhaps one way that you can start healing is to get Critical Suicidology and to get critical of the ways that you think about suicide.