Blog
You are here: Home1 / Blog2 / Professional3 / Leadership4 / Leaders Lead from the Back 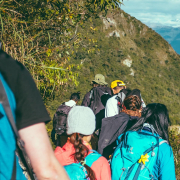 Not everyone gets the opportunity to go hiking in the mountains, but there’s a valuable leadership lesson to be had by hiking in the mountains with others – particularly a family.  Hiking with a family necessarily involves people with differing abilities, needs, and skills.  Keeping everyone together is what makes a great leader effective – and it’s rarely the thing that people see when they’re watching a family or group pass them on a trail.

Head of the Pack

Some people – generally a father figure – will take up position at the beginning of the group, leading the followers on the right well-worn paths to prevent them from getting lost and ensuring the hike that they set out to do is the one they complete.  By all accounts, this is what people would describe as a leader.  Fearless and intelligent, hard-charging and determined.

The message this leader often sends – either directly or through indirect means – is that the only way to “do things right” is by hard-charging into the future.  It’s blazing trails that wins the day, not careful, deliberate attempts to keep everyone together.  Ironically, in most cases, they’re not blazing the trail but instead finding one that they’ve been promised leads to the destination or experience that they desire.

The image we have of leadership is one of a leader and followers rather than a group of people who desire to share an experience together.  We sometimes forget that the journey matters, too.

Bringing Up the Rear

Equally common as a leader in front is a person in back.  Generally, this is a caretaking role, like a mother who carefully watches those ahead of them and intuitively slows down to stay behind the last person, or recognizes the need for resources like water and gets those resources to them.  There is no pace-setting or direction-setting in this role.  It’s the role that makes sure that everyone is going to the same place in a way that prevents people from being left behind.

What’s interesting about the role is that it most closely aligns with the supportive role that many effective leaders take.  They’re not just setting a direction, but they’re also tending to their people who need help.  Instead of dictating, they’re facilitating.  Instead of charging, they’re caring.

There’s a greater awareness that the goal is the shared experience as much as the destination.  It’s a caring for people – with the desire to have a new experience.

I won’t be able to go to the depths how Joseph Rost’s Leadership for the Twenty-First Century does.  He dedicates nearly 2/3rds of the book to getting to an understanding of leadership that’s summarized neatly as people in a relationship intending real change.  That opens leadership up to everyone, not just people with titles or special talent, but also people who are in relationships and intend to make a real change.

In this context, families and organizations want to make their interactions more positive and the people in them want to do it together.

One would be right to question the analogy when applied to business or civic life.  After all, we can’t easily replace a child or a crazy uncle.  Families have a relatively fixed relational structure that other groups do not.  There will always be times when the people you’re bringing with you on the journey are the wrong people.  In corporate life, it’s a hard decision to make to ask someone to leave and, in tight labor markets, even harder to find the right person to replace them.

However, until you’ve decided they must leave, you should support them as best you can – even if you don’t fully believe that they’re going to make it.

It’s too easy from the head of the pack to leave one or more people behind.  In fact, it’s easy to leave everyone behind.  A leader without followers (or collaborators, as Rost began to call them) isn’t a leader at all.  It’s only from the back that you can ensure that everyone makes it and truly shape the experiences they have.

Book Review-Team of Teams: New Rules of Engagement for a Complex World