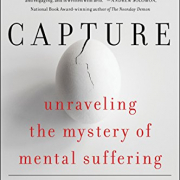 One of the common challenges with those who are embroiled in mental suffering is that they feel stuck.  It’s almost as if their suffering has caught them in a net, and they can’t find their way out.  Capture: Unraveling the Mystery of Mental Suffering is focused on that idea – that people are caught by their mental suffering.  No matter which path they’ve been walking, somewhere along the line, they’ve stepped into a trap – and they’re struggling to free themselves from it.  Some are able to get free with support from medications and therapies, but some seem to be perpetually stuck.

While on the surface mental suffering may not look much like addiction, as you look deeper, the similarities begin to surface.  In The Power of Habit, Charles Duhigg explains a cycle that he claims helps us define habits.  (His reading of the science is a bit weak, but, conceptually, the idea of a cycle is a good starting point.)  If you consider that addiction is simply the progression of a coping strategy becoming more controlling of a person, it’s easy to see how this is a reinforcing cycle.

Slowing that down a bit, you can look at The Globalization of Addiction and Dreamland about how difficult drug addictions function and how they’re driven by these progressive loops.  In particular, there’s a reinforcing shame cycle.  (See I Thought It Was Just Me (But It Isn’t) for more on shame and its effects.)  To understand the power of reinforcing loops, we can look to Donella Meadow’s excellent Thinking in Systems.  In short, when we have reinforcing loops without powerful balancing loops, any system can get out of control.

In the case of addictions, those reinforcing loops are initiated by the chemical and neurological changes.  Whether the addiction itself is chemically based or is simply the result of our internal neurochemical changes, the result is a system composed of powerful reinforcing loops with underpowered balancing loops.  One can argue that losing marriages, friends, finances, jobs, and most of the things that make life worth living would be powerful balancing loops, but often by the time that these kick in, the person is well under the control of the addiction.

Applying the same model to mental suffering, we know that many conditions – particularly suicide – are characterized by a cognitive constriction that prevents the ability to see a wider range of options.  (See The Suicidal Mind for suicide and cognitive constriction.)  In Drive, Daniel Pink explains that even mild forms of stress decrease performance through functional fixedness.  Specifically, research showed that even under mild pressure people wouldn’t recognize alternative uses for a container that tacks were placed in.

It turns out that it’s easy to constrict our thinking and difficult to expand it.  In Creative Confidence, the Kelley brothers explain that we’re all born creative, and it’s crushed out of many of us by the educational and commercial employment processes.  In The Fearless Organization, Amy Edmondson is focused on the creation of psychological safety as an antidote to the constriction.  Richard Lazarus, in Emotion and Adaption, explains how our fear is based on the probability of an event and the impact of the event – and that our ability to cope mitigates our sense of fear.  Fear is clearly an enemy to being able to think broadly.

One of the challenges we face with mental suffering is that most people bring it upon themselves by reinforcing negative thinking, which constricts thinking to negative thoughts, and this loop ultimately continues until it’s difficult to see or accept positive things in our lives.  This is the same kind of cycle that drives addiction.  The difference here is that there’s no external object to which an addiction is attached.  Instead, the addiction is to the negative thoughts that continue to loop and consume those who experience mental suffering.

The Illusion of Control

Always lurking in the shadows, shaping our feelings and our actions, is the desire for control.  We crave predictability and love the predictability that comes with the illusion of control.  In Compelled to Control, J. Keith Miller explains that we all want to control (others) but that none of us wants to be controlled.  One of the great revelations in The Hope Circuit is that Marty Seligman’s great discovery of learned helplessness wasn’t learned helplessness at all.  In fact, Steven Maier (one of Seligman’s colleagues) discovered that it was a failure to learn control – or influence – that kept animals from trying to escape mild shocks – even when escape was possible.

C. Rick Snyder in The Psychology of Hope explains that hope is a cognitive process based on waypower (knowing how) and willpower (desire). Inherent in the waypower aspect is the belief that if we do the right things, we can control the outcomes. While, at some level, we are aware that this isn’t the case, we suspend disbelief to engender hope and accept that while we believe we have control of the situation, we really only have varying levels of influence.

Judith Rich Harris explains in No Two Alike and The Nurture Assumption that even with our own children, we don’t have positive control of how they’ll turn out – as any parent of a teenager has undoubtedly discovered on their own.  The desire for control is an illusion – but it’s an illusion that we need to keep intact.

There’s a dim awareness that we don’t have control.  Where control implies 100% influence, we’re often arguing with ourselves about the degree of influence that we have.  In How We Know What Isn’t So, Thomas Gilovich explains that we often overestimate our capabilities.  Change or Die explains that our ego is well armed with defenses.  We will often keep believing in things because the alternative is unpalatable.  Incognito and The Tell-Tale Brain explain that we’ll use a variety of defenses as necessary to continue to keep our beliefs about ourselves even when the data clearly indicates that our perceptions are wrong.  Whether it’s denying that we have any physical limitations despite the rather obvious facts that contradict that belief or an amputee’s belief in phantom limbs, we have an amazing capacity to ignore the truth.

If we begin to accept for a moment that we’re not in control but rather have limited influence, we must contend with the fact that we’re no longer “in control” no matter how much of an illusion that might have been.

Obviously, when we lose the illusion of control, we lose hope, and that can lead us to burnout and depression.  (See ExtinguishBurnout.com for burnout resources.)  On the one hand, we need to accept that control is an illusion to free us from the burden of belief that everything is ultimately our fault; on the other hand, we must simultaneously retain the belief that we do have some degree of influence and that degree of influence may be enough.

We get caught in the belief of permanence in our current situation and our belief that we should have prevented it – but didn’t or couldn’t.  The result is a feeling of being trapped, greater stress, and, ultimately, our worlds narrowing into the perceived hopelessness.  (See Why Zebras Don’t Get Ulcers for more about the impact of stress.)

We cannot be ultimately responsible for things that we cannot control.  That is, we cannot accept all the blame if we only influenced the outcomes – but insufficiently.  Mistakes Were Made (But Not By Me) examines an under-acceptance of responsibility on the part of leadership.  While certainly this is a valid and important concern, we should be equally concerned when we attempt to take more responsibility than we are due for things that are largely outside of our control.  (See Happier for more.)

Those who suffer often take more responsibility than they should.  They shame themselves for not doing more when there was no way to know that more was called for – or ways that one could do more.  The burden of unnecessary and inappropriate responsibility buries us under weights of depression and disappointment that may be too much to escape.

When something bad, tragic, or unthinkable happens, we naturally question, “If only I had… would things be different?”  The problem with this line of thinking is that, at some level, the answer is always yes – you could have done something different.  The deeper philosophical challenge is how could you have known that more was necessary?  You begin to ask questions like: how would I change every response in ways that lead away from the result every time?  Often, these answers lead to hypervigilance and a breakdown.

We can’t undo the past no matter how much we may desire to do so.  Instead, we must find ways to take reasonable steps to prevent future occurrences while accepting whatever tragedy has already befallen us.  “If only” is dangerous, because it invites us into the loop where we recognize that we’re not capable of completely avoiding the future pains and intensifying the degree to which we second-guess ourselves.

None of Us Are Immune

Perhaps the most disturbing thing about the tendency for people to get captured is the reality that none of us are immune.  We’re all bombarded by sensory input every day and ultimately the wrong set of inputs at the wrong time given the wrong attention can launch us into a loop – capture – that’s hard to escape.  Nassim Taleb in Antifragile explains how we can build resilience but how that all resilience has limits.  After we’ve been impacted by something we need time to recover – and ideally build up resistance – if the next wave comes too quickly or intensely, we can be overwhelmed – and caught up in a negative cycle of mental suffering.

The fact that all of us are susceptible doesn’t change our desire or need to make things better.  We’ve got to accept the fact that we can be captured and work to develop the kind of skills that make our descent into the spiral less likely and easier to recover from.

While Capture has the unfortunate consequence of burdening us, it’s not always a negative cycle that we find ourselves in.  Sometimes, the same mechanisms that drive depression can be turned around on themselves and leveraged to the most amazing experiences.  The experiences that we find the most engaging in life are experiences of flow, which are remarkably similar – even if much harder to enter.  (See Flow, Finding Flow, and The Rise of Superman for more on flow.)

In the end, the greatest hope we may find is not that we eliminate the drivers that lead to mental suffering.  Perhaps the answer lies in harnessing these powers for the development of greater happiness and joy.  Maybe it’s time to Capture happiness.

Leaders Lead from the Back