Book Review-I’m Your Huckleberry: A Memoir 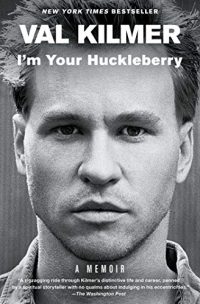 Book Review-I’m Your Huckleberry: A Memoir

Most people don’t think of Val Kilmer’s role in Real Genius as a defining moment.  They’d pick something else, like Top Gun, The Saint, or The Doors.  However, I’ve always been impressed with the capacity for range and the ability to embrace a character.  I’m Your Huckleberry: A Memoir walks through Val’s life in career and in love.

Val Kilmer’s movie credits are impressive, his recent medical challenges tragic.  The ride between the two – and the journey he’s still on – are worth following.

One of the most entertaining quotes from the book is “Imagine going to sleep knowing that one neighbor had hanged himself and the other had stuffed two of his three costars.”  The other neighbor was Roy Rogers, who had Bullet the dog and Trigger – his horse – stuffed.  It was definitely different than the life that most of us knew growing up.

Val’s experience of childhood created an awareness of things that people had, and repeatedly through his memoir, he shares his longing to find places where it didn’t matter how many backhoes you owned.

“It was tough telling the down-and-out homeless from the down-and-out musicians.”  It is one thing to love your art, whether it’s on canvas, in sculpture, in music, or on stage.  It’s quite another to make a living of it.  There’s a sense of dumb luck mixed in with the hard work and dedication that makes it impossible to tell those who are good and those who aren’t simply by their appearance.  Success on stage could also mean living a meager life if your roles weren’t great and the stage wasn’t popular.

Somehow the rewards of great performance had a random connection to the talent that was wielded from within.  This was a frustrating truth about acting – and all art.  Those who make it big may have less – or more – talent than the others who strive in obscurity, but there’s no way to know.

“[S]ide trips have been as important to my life as the main voyages.”  There’s a sense that we should have some straight arrow that points out the paths we have in life.  We should know what we want and take it.  However, that’s almost never the case, as we take side trips, the road ahead of us turns in unexpected ways, and we just experience life rather than pursuing the false belief that we can plan out our lives.  Even Robert Pozen in Extreme Productivity acknowledges that as planned and directed as his life seems in retrospect, it was never really that.  It was always adjusting to the reality around him.

At some level, Val is sharing the side trips as failures – but more broadly, they’re ways of gaining experience and perspective.  They’re things that may not have been commercially viable or recognized for their quality, but they were nonetheless a way for one to develop wisdom.

“Artists can become severely depressed when they’re not performing.”  Can’t we all?  We push to complete a project, and we await the results.  We are caught in a limbo between our past efforts and our future fears.  What if they don’t like it?  More importantly, what will I do next?  For those who are driven, the idea that we don’t know what to do next is one of the most terrifying things – and if you work on projects, the feeling comes with irregular regularity.  The title, I’m Your Huckleberry, Val confesses, comes both from the love of Mark Twain and from the idea that pallbearers used to be called Huckleberries.  In a sense, Val mirrors the winding road all our lives can take.

Not Saving a Child

Val lost his brother, Wesley.  He saw how this crushed his father.  Francis Ford Coppola lost his son, and Val saw the torture it inflicted upon him.  “He explained that parents, no matter the circumstances, are never free from the guilt of not being able to save their child.”  Parents are supposed to protect their children.  This is the way it’s supposed to be – even if that’s not realistic.  We can’t prevent tragedy from striking – even for our children.

Coppola and Val are right.  You never really accept that you can’t always save your children.  There’s a part that stays with you.  Whether it’s guilt or something else, it won’t let go.  It becomes a part of you, and, too often, it clouds your judgement or chokes off reason.  It can all too easily strangle the desire to live in the ways that you once did.

The Day You Find Out Why

“The two most important days in your life are the day you are born and the day you find out why.”  It’s funny, because I’m not sure that Val has found his “why” yet.  At least, I’m not sure that I saw it in the book.  I say this as someone who doesn’t believe has found his why yet.  I don’t believe that I know what is truly in store for me or what I’m to do.  I am looking forward to the day that I find out what it is that I’m supposed to do.

Val contracted throat cancer, and it’s limited his acting roles.  He’s now doing artwork and trying to find what’s next.  For me, I deeply respect the work and the journey.  I appreciate the opportunity to glimpse into his world and to learn from what he’s learned.

Maybe Val has found his why, and I couldn’t see it.  Maybe he didn’t write it down.  Either way, I hope that he finds his and I find mine before someone comes to me and says, “I’m Your Huckleberry.”

PrevPreviousBook Review-The Art of Insubordination: How to Dissent and Defy Effectively
NextBook Review-The How of Happiness: A Scientific Approach to Getting the Life You WantNext