Book Review-The How of Happiness: A Scientific Approach to Getting the Life You Want

Home Book Review Psychology Book Review-The How of Happiness: A Scientific Approach to Getting the Life You Want 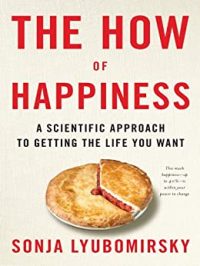 Book Review-The How of Happiness: A Scientific Approach to Getting the Life You Want

Life.  Liberty.  And the pursuit of happiness.  Our founding fathers placed it third, but Aristotle and most others would have placed it first.  Happiness is a central consideration in life, yet we’re notoriously bad at finding it.  The How of Happiness: A Scientific Approach to Getting the Life You Want was written to try to fix that.  Research-backed practices are the path towards happiness – or at least one of them.

Before delving into Sonya Lyubomirsky’s work, it’s important to recognize that we’ve been struggling with the problem of cultivating happiness for centuries.  I first wrote my review of Stumbling on Happiness in 2007.  Since then, more than a dozen books have sought to cover happiness, including: Happiness, Hardwiring Happiness, The Dalai Lama’s Big Book of Happiness, and The Happiness Hypothesis.  The simple fact is that many people have tried to find the path to happiness that would reduce the misery of the masses.  However, none of them seem to have solved the core problem.  From approaches of philosophy, religion, and psychology – they failed to unlock the path for most of us.

The proof is in the fact that we’re some of the most medicated people in the history of the planet – and leading those medications are those designed to combat depression.  Depression (in some ways, the opposite of happiness) is at epidemic proportions despite all the work that we’ve done to try to understand how to address it – and to cultivate happiness.

For some, we feel as if we’ve found happiness, and we’ve lost it.  Much like the movie Medicine Man, we feel like it’s possible to find happiness – if we can just recreate the circumstances.  What we must realize is that it’s not about finding happiness, it’s about creating it.  Research says that the things we believe will bring us happiness rarely do in a persistent way.  From increases in pay to awards, they may elevate us to happiness for a moment, but rarely will they hold us in a new heightened level of happiness.  They’re like a mirage that seems real in the moment – but that ultimately fade as we arrive.

Rather than trying to find happiness, we’re forced to find ways to construct it.  We construct it through the mental habits that we develop.  We find and maintain happiness not because of our external circumstances but sometimes despite them.

Happiness is a State of Mind

What makes two people in nearly identical circumstances diverge so widely in their degree of happiness?  While laying bricks in the hot sun, what is it that makes the worker on the left whistle a tune, and the one on the right grumbles and moans the whole time?  The answer isn’t their material circumstances; invariably, the answer is their perspective on their circumstances.

During the Great Depression, many people flocked to the public works projects as a part of the New Deal.  The work was hard – and competition for even these physically demanding jobs was fierce.  In the Depression, having any work was a blessing – even if it was hard.  Contrast that with today, with historic low unemployment rates, and people whose conditions are materially better than those on the public works projects who are grumbling about their job, their lot in life, or the fact that their employer is oppressive.  Better work with a worse attitude – because the expectations and perspectives were different.

The most important thing to know about happiness is that it doesn’t – and can’t – come from external things in a sustainable way.  Sure, a raise, a vacation, or an award can shift your happiness for a moment, but to get to a sustainable change, we’ll have to change our attitude about the circumstances we have.  Our attitude towards our circumstances is substantially more important than the “reality” of them.

When our happiness is changed by a change in circumstances, we acclimatize to the changes and return to our previous state of happiness.  Want to know how much money it takes to be happy?  It’s about 20% more than you currently make.  If you get that 20% raise, you’ll be okay for a while before returning to the belief that 20% more will finally make you happy.  The problem is that this is a mirage.  The closer you get to it, the further it moves away.

That isn’t to minimize the situation of those who are struggling in abject poverty.  However, that’s not the case for most of us reading the book or reading this blog.  Our basic needs aren’t substantially at threat.  There are many safety systems that help to ensure that we’ll have food or a place to rest.  (Again, not minimizing that these systems aren’t perfect and sometimes fail.)  Once a family is making $75,000 per year, the degree to which the 20% extra improves happiness drops substantially.

When I was growing up, I had a friend whose family literally didn’t have a phone in their home.  A government program eventually made it possible for them to get a phone.  However, the point is that something that nearly everyone today would perceive as a necessity wasn’t something that they had.  Today, we walk around with smart phones and expect that we will have them.  Our standards both at an individual and societal level creeps up.

It was a friendly gathering at a breakfast restaurant.  I shared that I read a book each week and had for roughly 10 years with another avid reader.  His nearly immediate question was how I kept all the ideas straight in my head.  I explained that it was this process – writing book reviews – that made it possible.  It’s a sense-making and connecting process that allows me to connect ideas from one work to another and in the process helps me remember where something was discussed.

That being said, I must say that there’s tons that I have trouble remembering and finding the source for.  I frequently refer to these posts and to the notes from which they’re based.  I search books in Kindle (and in OCRed PDFs when the Kindle book isn’t available).  I work at connecting and keeping this information in the same way that those who are insistent on their happiness must work at the techniques that lead to happiness.

James Pennebaker’s work, which is referred to from The How of Happiness, makes it clear that this story writing and sense-making is critical to people’s ability to recover from trauma – and to be happier.  Rick Hanson goes further in his book, Hardwiring Happiness, where he focuses on some of the same techniques but by savoring positive images and making them more present in your life today – thus increasing happiness.

Envious or Happy – Pick One

One of the quips that I use in our presentations is that social media isn’t “real.”  After a pause, I explain that it’s a highlight reel.  Most people post the things they’re doing that are interesting and exciting.  They don’t often share their failures and the struggles of life.  While it happens, it doesn’t happen often.  As a result, social media leaves us believing that everyone else’s world doesn’t have times of struggle and sadness.  (See also Alone Together for this effect.)  Our fascination with cooking shows, reality television, and even home renovation shows exacerbates this.  All of them skip the boring parts.  The waiting isn’t worth watching, so it’s figuratively left on the cutting room floor.

The problem is that this can lead to a sense of envy of others that we barely know.  A friend shares their amazing photos from Hawaii or Iceland, and suddenly we want to go.  We’re envious for a moment – or longer – as we begin to evaluate whether we’ll be able to go or whether we’ll have to skip it this year or even this decade.  We envy their experiences even if we’ve had some amazing experiences this year ourselves.

The problem with this is not that we can’t have these experiences.  The problem is that we envy others, and envy blocks happiness.  It prevents us from accepting what we have and moving forward with ways that we can enjoy what we have.

The book shares 12 activities that have research support.  These are the things that, if you do them, you’ll be able to change your degree of happiness.

It’s important to acknowledge that some degree of our happiness is inborn – it’s genetics.  However, there’s a substantial percentage, perhaps 40%, which is under our control (or influence).  This is the same sort of split we see whenever genetics are discussed in the human condition.  (See The Nurture Assumption and No Two Alike for more.)

There are some people who will have lost the cortical lottery and will struggle with happiness their entire lives.  However, most people have the capacity for happiness which is well under their control – if they’re willing to work at it.  It’s those people – most of us – who could use to learn more about The How of Happiness.