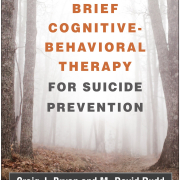 There’s not much that works.  When it comes to suicide prevention, the list of interventions that reduce attempts is small.  There’s Brief Cognitive-Behavioral Therapy for Suicide Prevention (BCBT-SP), Dialectical Behavior Therapy (DBT), and Collaborative Assessment and Management of Suicidality (CAMS).  BCBT-SP is a time-limited, targeted use of CBT, which has been widely validated for several concerns over the decades since its introduction.  It’s because it’s so widely adopted and widely known that it is so interesting to me.

I should say that DBT, as the BCBT-SP book points out, is complicated and difficult to implement correctly.  It also tends to be resource intensive – as CBT can be.  That was my experience as I began studying it.  In addition, much as I found with NLP, everyone seems to define it a bit differently.  (See The Ultimate Introduction to NLP: How to Build a Successful Life for more.)  It’s still in my backlog for study, but it’s hard to bring myself to it.

CAMS is another option, which is more straightforward.  However, CAMS is intentionally designed for the mental health professional, and its training systems are geared towards that audience to the exclusion of non-professionals.  As a result, my research into CAMS was stopped before I started.

The research is relatively clear.  When dealing with someone who is suicidal or potentially suicidal, the best path is direct.  Asking them if they’re considering suicide doesn’t make them more likely to attempt or die by suicide.  The clinical approaches that indirectly deal with suicide don’t work.  Despite this, many professionals don’t directly address the topic of suicide with their patients.  They instead work on skills they believe may be useful and dance around the topic.

There are likely two factors for this.  First, they probably don’t know the research.  Most mental health professionals don’t do that much work to keep current or to broaden their skills.  The reputation of the industry is not great, as The Heart and Soul of Change points out.  BCBT-SP explains that peer reviewed research points to “insufficient education and training for clinicians in newer and better models of care.”

Second, they’re probably, themselves, uncomfortable with the topic.  That makes it hard to have a conversation with patients.  If you can’t keep from being triggered by the conversation, you won’t be able to have it with a patient.

BCBT-SP focuses on the fluid vulnerability model, which has four factors: behavioral, cognitive, emotional, and physical.  They’re separated into two tiers: baseline and acute.  Each of us has a set of vulnerabilities for each of the four factors at baseline.  This is the place that we operate from most of the time.  We can have huge capacity and tolerance at our baseline – or not much at all.  An activating event triggers our acute factors.  When the sum total exceeds our threshold for tolerance, a suicidal episode may occur.  From the outside, it may seem like a relatively minor issue, but when processed by someone with a low tolerance, it may be more than they’re capable of.

The baseline tolerance comes from our experiences and our skills.  The adverse childhood experiences (ACEs) study connected health outcomes as an adult to the experiences as a child.  (See How Children Succeed for more on ACEs.)  Pushing back even further, fetal origins of adult disease (FOAD) indicates that the stress our mothers felt during our gestation may impact our health status decades later.  (See Why Zebras Don’t Get Ulcers for more on FOAD.)  What’s unstated in this research is that our mental health – our ability to develop coping skills – has a huge impact on our physical health.  Change or Die quotes Dr. Raphael “Ray” Levey that 80% of our medical costs are driven by five bad behaviors: too much smoking, too much drinking, too much eating, too much stress, too little exercise.

Richard Lazarus in Emotion and Adaptation explains that our emotions aren’t directly driven by the external world but are instead processed through our brains and filtered to what we’d express.  Daniel Kahneman calls this System 1 in Thinking, Fast and Slow.  We see patterns, apply meaning, and respond – very quickly.  What BCBT-SP does is help to change our processing of our circumstances so we can see them in a better light.

It’s a simplification of Joiner’s work, Why People Die by Suicide, to condense the model to just desire and means – but it works.  For a suicide to happen, one needs both the desire and the means.  If you eliminate either, you have no suicide.  Given the nature of suicidal ideation being so unpredictable and fleeting, it’s probably no great surprise that restriction of means has a greater impact on suicide attempts and deaths than attempts to change the way that people process their circumstances.

The problem with means restriction is that nearly 50% of the suicides in the United States are done with a firearm, and the United States is in love with our firearms.  The Second Amendment to the Constitution is the right to bear arms.  The mechanisms you use to restrict someone’s access to a firearm are often treated with a high degree of skepticism and concern.  Luckily, the research supports that you don’t need to create a big barrier between the use of the gun and the person with suicidal ideation.  Like Adrian Slywotzky explains in Demand, sometimes a small barrier is all it takes to prevent a behavior.

Certainly, it’s best to remove the firearms from a suicidal person, but smaller measures, such as installing a gun lock – which prevents activation until removed – is enough.  Even separating the storage of ammunition and the storage of the gun itself has a non-trivial, positive impact on outcomes.

Other approaches, like some of those that Thomas Joiner shares in Myths About Suicide are also useful.  95% of people who were stopped trying to jump off the Golden Gate Bridge never died by suicide.  Suicide fences on bridges (making it harder to jump) are also effective.  It turns out that people don’t often change their chosen method of suicidal attempt.  It seems like they just decide if they can’t die the way they want (gaining some control over death), they’ll just keep living.  (See Ronald Maris’ Comprehensive Textbook of Suicidology for more on control over death.)

Whether you subscribe to Edward Shneidman’s beliefs that it’s psychache – psychic, psychological, or emotional pain – that causes people to die by suicide or something else, the sense that suicide is sometimes an escape can’t be ignored.  If you believe that life is unbearable and won’t get better, then suicide begins to be seen as a reasonable answer.  When all other paths towards resolving the problems of life, are blocked then removing life seems reasonable.

Perhaps then part of the answer towards reducing suicide is the process of reducing hopelessness and the belief that suicide is a better option than any of the other options available – or even an option worthy of serious consideration.  Seligman and his colleagues first started writing about learned helplessness, the animal equivalent of hopelessness, in the 1960s.  They realized the powerful problems that becoming helpless – or hopeless – creates.  Decades of research has continued along these lines, and Seligman explains in The Hope Circuit that they got it wrong.  It wasn’t learned helplessness but, as a colleague of his Steven Maier showed, a failure to learn control or influence that caused the subjects to stop trying.

“Afflictive emotions” is the way that the Dali Lama describes them.  They’re emotions that take away from a person.  Strangely, what we call an “emotion” in English might have different words in Tibetan or at least more nuanced connotations than we typically observe in English.  For instance, pride in oneself might be bad, but pride in what others have accomplished can be good.

However, there are some emotions that are negative.  Humiliation, for instance, is universally bad.  There’s no need to humiliate others – or to feel humiliated yourself.  Other emotions, like guilt and shame, may be adaptive, but they’re still negative and can easily be overdone.  Guilt is that you’ve done something wrong.  Shame is that you are bad.  (See I Thought It Was Just Me (But It Isn’t) for more on shame and guilt.)

These emotions may have an evolutionary advantage – teaching us what we should or shouldn’t do.  (See The Righteous Mind, The Blank Slate and The Evolution of Cooperation for more.)  The challenge is that these emotions are amplified in those who are depressed and can overwhelm them.

In healthcare and in life, there are many forms to be filled out and an array of people who are looking to help you fill out the forms you’re expected to fill out yourself and those they’re expected to fill out.  They’re systems designed to ensure that people are treated well.  It’s common to use a PHQ-2 followed by a PHQ-9 if the answers on the PHQ-2 are concerning.  It’s a series of checks and answers – but often it seems like that’s all it is.

The questions are asked by others with leading language and guiding glances.  They don’t want you to answer in a way that triggers the second set of questions – and even if you do, they’re not interested in the truth.  They’re interested in checking the right boxes so they can go on with their next task.  It’s no wonder that people don’t feel listened to.  How can you feel authentically listened to when the entire interaction is about filling out the forms?

That’s why, when people go through the BCBT-SP process, they often remark that the process is the first time they’ve ever felt listened to.  The first step in the process is to have the person tell their story in their words as a narrative – not as answers to standard questions on a form.

One of the oddities that we observe in suicide is that attempts go up at the end of a depressive episode.  Some account for this by saying that the psychomotor retardation (lack of desire to do anything) that depression brings abates (goes away) prior to the desire to die disappearing.  Another odd experience is the increase in attempts as people leave an inpatient treatment facility.  They seem to be getting better – but that turns out to not necessarily be the case.

One reason for the appearances not matching the outcomes could be that people are “white-knuckling it.”  That is, they’re summoning all of their willpower to push back the depression and suicidal ideation.  That can work for a while until they’ve exhausted their willpower.  Roy Baumeister explains in Willpower that it’s an exhaustible resource – just like our muscles.  So it can be that they seem better as they’re consuming willpower and fall when they exhaust it – sometimes falling into a pit of despair that leads to a suicide attempt.

Neither you nor those you care about should have to white-knuckle it.  Brief Cognitive Behavioral Therapy for Suicide Prevention is an alternative – that works.