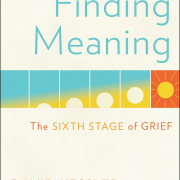 Grief sucks.  Finding a way out from underneath the weight is the goal.  That’s what David Kessler proposes in Finding Meaning: The Sixth Stage of Grief.  How do you learn to grieve in ways that avoid suffering and allow you to find some meaning in the aftermath of loss?  Kessler argues that finding meaning helps to transform grief so that it’s less painful and less suffering.

Kessler’s previous books include co-author Elizabeth Kubler-Ross.  Kubler-Ross wrote On Death and Dying, a classic about how people respond to the prospects of their own death, which she and Kessler adapted to the grieving process in On Grief and Grieving (which I’ve not reviewed).  Not everyone is wildly supportive of this work and approach to both death and grieving for various reasons.  However, as I explained while defending it against the concerns leveled in The Grief Recovery Handbook, it’s solid work that’s often misunderstood.

Grieving doesn’t follow a single linear path from start to finish with regular checkpoints along the way.  Instead, grief is a deeply personal process that has no one answer.  One moment you’re accepting things, and the next you’re throwing things in frustration, desperation, and denial.  This is sometimes confusing to those who are going through it – or those close to them.  After a moment or month of return to denial, it’s hard not to question what progress looks like and whether things are headed in the right direction.  However, that’s not giving the grieving both the benefit of the doubt – and the space to grieve in their own way and their own time.

Candy Lightner formed Mothers Against Drunk Driving (MADD) after the death of her daughter Cari at the hands of a repeat drunk driver.  John Walsh started America’s Most Wanted after the abduction and murder of his son.  Neither desired the tragedy – but they decided to make the best of it in hopes that others wouldn’t have to go through what they went through.  Knowing intimately the pain and torment of the loss of a child, they decided that no one else should have to.  They found meaning in a purpose.  They developed their grief into a force to prevent others from having to feel it.

Even those who have spent their lives teaching and writing on a topic can find themselves unprepared when it happens to them.  Kessler explains that he lost his 21-year-old son and how none of the work he had done teaching people about grief was enough to prevent his own loss.  He may have handled it better than most – but it wasn’t as if he managed to side-step the grief process.  What he did know was where all the signposts were.

One of the things that we know about humans is that we have a deep need for things to make sense.  If prediction is the fundamental purpose of consciousness, then we need sense-making to feed the prediction engine.  (See Mindreading for more about the belief that prediction is the fundamental purpose of consciousness.)  We know that we learn and think in stories.  (See Story Genius and Wired for Story for more.)  We even recognize the role that sense-making plays in whether someone will emerge from a trauma with growth or post-traumatic stress disorder (PTSD).  (See Transformed by Trauma, Opening Up, and The Body Keeps the Score for more on how sense-making relieves PTSD)

It’s no surprise, then, that to transform a trauma of the loss of a loved one, we need to make sense of it.  What is surprising is what that sense can mean.  It can transform someone from believing the world is a fundamentally helpful place to a view that the world is fundamentally hostile, and it’s necessary to protect oneself.  This is a fundamental belief, because it’s not easily changed – but the loss of a loved one is just the size of trauma it might take to shift it.

Conversely, the sense-making can be much, much smaller.  It can be that you develop an avoidance for the source of the trauma.  If your husband died in a motorcycle accident, you may develop a strong aversion to motorcycles.  The sense that you make from the trauma is personal, and it likely will never answer the question about why your loved one had to be the one.

Meaning Is What You Make of It

Meaning is what you make of the tragedy.  It can be a quest to change the world to make it better or form connections with others who’ve suffered similar tragedies.  The meaning you make isn’t the same meaning that someone else would make.

It is possible to avoid grief – but at what cost?  Grief is the way that we experience loss.  It’s possible to avoid loss only through the avoidance of learning to love others.  If we don’t care about others, then we can avoid grief.  In the moments of deepest mourning and grief, we may briefly decide that this sounds like a good plan only to realize it’s a fool’s errand.  Love is what makes life worth living.  It’s the light in the darkness that we sometimes see in the world.

To be clear, love here is the relationship and connection that you have with others.  It might be the Greek eros (sexual love), but it’s more often philos (brotherly love) or agape (world love or compassion).  The Grief Recovery Handbook appropriately points out that grief is the way that we respond to loss, and therefore it doesn’t necessarily have to be related to love – but it often is.

The divorce rate of parents who have lost a child is high – too high.  Kessler attributes this to the fact that the spouses grieve differently, and they don’t allow for their partner’s grief in a way that accepts and validates it.  We believe the way that we grieve – as influenced by our societies, families, and personal experiences – is the way that everyone should grieve, and we’re confused when our spouse doesn’t grieve this way.

David Richo suggests that there are five As that we need in his book How to Be an Adult in Relationships.  Those As are attention, acceptance, appreciation, affection, and allowing.  Perhaps if everyone practiced these, we wouldn’t have to compound the tragedy of death of a child with the tragedy of divorce.  (See more about Divorce.)

Capture speaks of how our processing of a situation or our life can leave us stuck.  It’s as if our loss has taken the wheel, and we’ve become helpless passengers on the journey of grief.  The process isn’t fundamentally different from the process of addiction, where someone starts with a coping strategy that progressively gains more and more control over them.  Some people can become stuck in their grief process, swallowed up by the support that we receive to the point that we fail to stand on our own or attempt to regain control of our lives.

While it’s natural to be utterly overwhelmed and unable to function after a loss, at some point, we’ve each got to figure out how we can work on our own healing.  No one can heal us – it’s something that we must do ourselves and it’s not easy.  The healing that we muster doesn’t mean our loss didn’t happen or won’t impact us, but it does mean that it no longer controls and confines us.

Kessler argues that grief is necessary, but suffering is optional.  I agree in part – but disagree as well.  The word suffering is “the state of undergoing pain, distress, or hardship.”  The losses that we’re speaking of necessarily cause suffering.  However, where I agree with Kessler is that the amount of time you spend in suffering can be influenced.  You can choose to remain in a state of persistent suffering, or you can crawl and climb your way out of the hole that is suffering.

Those who have lost someone are caught between two incompatible expectations.  On the one hand, they’re expected to return to “normal” as soon as possible.  People wonder if you’re “over it” yet.  On the other hand, we’re told the degree to which we grieve is the degree to which we loved the person we’ve lost.  In that case, shouldn’t we go on grieving forever?

The truth is that we will continue to grieve forever.  It will change and transform, but it will always be there.  We can choose to have the expression of our grief be pain and distress or we can simply experience it as a loss.

Why Me and What Do I Do Now?

There are two different ways to questions we ask ourselves in any loss – and we all use both at different times and to varying degrees.  The first approach is to ask the question, “Why me?”  This comes from a place of victimhood.  Why was I the victim of this unfair event?  The answer that life isn’t fair isn’t very satisfying.  While the question is reasonable and expected, you don’t want to build a home in victimhood.  (See Hostage at the Table for more on victimhood.)

The other question is, “What do I do now?” which represents an awareness of the agency we have in how we respond to the events that happen in our lives.  Losses happen that we have no control of.  We must simply accept they’ve happened no matter how painful they are or how much we want to avoid the outcome.  While losses aren’t controllable, the way that we react to them is.  Certainly, we should mourn the loss and grieve but we can choose for how long and in what ways.

That isn’t to say that we have conscious control of our grieving process, and we can decide that, on Tuesday at 3:02 PM, we’re done.  Instead, we control the responses in a way that encourages our recovery or leaves us in the same place of victimhood.

The person that we’ve lost can no longer be present for life.  Their death ends their participation.  However, we have a choice as to whether we are just going to be present for life or whether we’re going to find ways to make the best of what we have left – to thrive as much as is possible.  (See Flourish and The How of Happiness for more.)

Running into the Storm

Imagine for a moment that you’re out on the plains on a motorcycle with no protection from rain and storms.  There are no overpasses or anything to hide underneath.  Your options are to hunker down by the side of the road or charge into the storm.  Which option is a better option?  At first, hurling yourself headlong into a storm may seem crazy.  After all, why would you volunteer for more than what is already where you are?  The answer is because the storm is coming.  You cannot avoid it.  Turning and driving in the other direction will only prolong your experience of the storm.

When you face the storm and push into it, you reduce the amount of time you’ll be in it.  As the storm moves across the ground, you move forward and find the end sooner.  With our loss and grief, we can turn the other way and attempt to run from it, or we can face it and move forward at whatever pace we can manage.  If we face the storm and move into it, we’ll find the storm is over sooner.  No one is going to like loss, but maybe we can find our way through it by Finding Meaning.