Book Review-Trauma Stewardship: An Everyday Guide to Caring for Self While Caring for Others 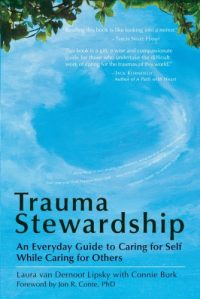 Book Review-Trauma Stewardship: An Everyday Guide to Caring for Self While Caring for Others

It’s an honor and gift to be trusted by people in their most challenging moments.  The moments when they’re in the greatest distress and vulnerability are a sacred space.  They’re a space where we have the opportunity to be the best of what it is to be human.  It’s also a burden to bear.  In Trauma Stewardship: An Everyday Guide to Caring for Self While Caring for Others, we learn how to accept the honor of supporting others without becoming overwhelmed ourselves.

Bronnie Ware cataloged The Top Five Regrets of the Dying and expressed her reverence at being able to be with people at these times.  Viktor Frankl expressed a similar sentiment about his time in the concentration camps through Man’s Search for Meaning.  Kubler-Ross, too, expressed her sense of privilege in her experiences in On Death and Dying.

I start here, because it’s easy, under the weight of supporting others’ emotions, to feel the burden more than the honor.  It’s easy to become worn down by continuous trauma dumping and difficult situations.  If we want to take care of ourselves, we must first recognize that it’s our decision to be a part of these situations – and that we both have the opportunity to say no as well as the benefit of being able to share these intimate moments.

Keeping the Chaos on the Outside

The real problem for the care worker – in whatever form – is that the chaos and insanity of the world they’re serving begins to creep into their thinking and shifts their perceptions in unhealthy ways.  Whether it’s the constant question about how people might use a place or tool to attempt suicide or it’s the belief that every parent does bad things to their children, the biased external reality becomes the cynical and negative view from which care workers see things.

Our family has a disproportionate degree of caregivers, with nurses, a physical therapist, and a paramedic firefighter.  The stories that we trade around the dinner table – without violating HIPAA – are about some of the worst things that happen in life.  We can be present for one another and listen to these stories, but not everyone could – or should.  We create this space to minimize the chance that one of us will feel as if the chaos that we see in the world is all there is in the world.

We need to recognize that for every moment that we see the depravity, there is an equal moment of awe at the love that we can see in our fellow man.

In I Thought It Was Just Me (But It Isn’t): Making the Journey from “What Will People Think?” to “I Am Enough”, Brené Brown tackles the tough issue of the doubt that causes us to wonder if we’re enough.  Care workers often are faced with overwhelming demand.  You may have helped the last person, and you may help the current person, but how long is the queue of people outside your door who’ve not yet come in?  How can you feel like you’ve accomplished something, if despite your best efforts, the problem remains – or gets worse?

Recognizing our own limitations, what we can and cannot do, and accepting that, in our world, there will continue to be suffering despite everyone’s best efforts isn’t easy.  We sometimes fall into the habit of thinking that the gap between the problem and the resolution is us – and that we must fill that gap.  There are several truths here.  First, we may never have been designed or able to fill that gap.  While we’re judging ourselves for not being able to span that chasm, it may never have been appropriate to consider it that way.  Just as we can’t take a car to the Moon, we shouldn’t assume that we should be able to fill every gap – but we do.

Second, we feel shame because we’re bad.  If we were better – or what we should be – we’d fill the gap and those we’re caring for would be better.  This is, of course, not logically correct if we know that the problem may not have been solvable by a single person, but that may be insufficient to stop those who help from believing they’re not enough.

We’ve become a world of human doings instead of human beings.  We’ve lost the ability to balance acceptance with where we are with the drive to make ourselves and others better.

A wise person in a twelve-step group commented on step 3, turning over our will and our lives to a higher power.  They said, “I’m an expert on turning over control.  I do it, and then when I take back control, I have to do it again.  I’ve done it thousands of times.”  The difficulty, they seem to be saying, is in releasing control over time.  Our belief that we’re in control of our lives may be an illusion, but it’s an illusion that people like.  The idea that you’ll completely trust another person or being to look out for you isn’t easy.

As we dance through the path of maintaining our balance while caring for others who are struggling, we must constantly wrestle with our desire to control our own destiny and accepting the world as it is – in having faith that things will work out okay.  We never know they’ll work out the way we want or not.  However, there’s a peace in knowing things will be okay.

In our attempt to believe in a world of causalities, where one thing causes another, we often find ourselves looking for people to blame.  If there’s a fatal car accident, who was the cause?  Was it the driver behind the wheel?  Perhaps the auto dealer or auto manufacturer did something wrong in the repair, maintenance, assembly, or design processes that we can point to.  Maybe it was the company that built the road or who is repairing the road.  Another possibility might be the company that made the signage.  These attempts to find the cause are endless and often pointless.  Unless the factor that led to the death can be reduced or eliminated, finding fault serves no purpose.

But we want to know.  Even if we can’t or won’t do anything about it.  We want to know, so we feel as if we have the power.

Sometimes, we must look past the “enough” and the “blame” to find a place where we accept.  That acceptance, coupled with recognition of how the trauma is changing us, may be what it means to practice Trauma Stewardship.