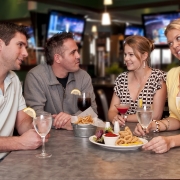 It’s not like you get to choose when conflict erupts. Conflict can happen unexpectedly, like a tornado. There may be a little warning – but there’s not much. That’s why, in conflicts like in natural disasters, it’s important to be prepared for the worst and hope for the best.

Benjamin Franklin knew the best way to develop rapport was to make a small ask of someone else and treat that request respectfully. He’d ask to borrow a book and then return it promptly. Trust works the same way. We make small requests of the other person and respond appropriately, and they’ll start to trust us a little more. By doing this repetitively, we build trust with the other person and ultimately build a foundation for successful resolution of conflicts.

Trust allows us positive affinity for the other party in a conflict and provides a reassurance that the commitments they make will be met – thus allowing for more creative ways to address the conflict.

While trust may require personal interactions, you can develop a respect for someone even if you don’t have the ability to interact with them directly. You can observe from afar how their decisions are determined or their actions convey their care and concern for a value, cause, or person. Respect is fundamentally admiration for someone or some aspect of them.

Respect therefore requires that you cultivate that feeling of admiration. In some ways, it can be actively looking for the aspects of their personality that you can admire and respect. For instance, you may not respect a manager’s temperament towards workers, but you may be able to respect the commitment to quality, the company, or some other aspect of their makeup that is virtuous or notable.

Inner peace is working through our disturbing thoughts, our past hurts, and the pains we’re holding on to, so that they’re not accidentally stumbled over during a conflict. If conflict was always scary and risky as a child, it’s desensitizing yourself to conflict so that it can become more ok. If you are triggered by someone who seems to be ignoring you, it’s finding the root cause for this and working on it until it doesn’t trigger you as much – or doesn’t trigger you at all.

The goal is more inner peace – not absolute inner peace. Richard Moon, an Aikido master, said, “It’s not that the great masters never lose their center, it’s that they discover it sooner and recover faster.” The point isn’t perfection. The point is that, the more self-aware you can become, the less likely you’ll be triggered by a conflict and the more quickly you can do something about it.

If you can put these pieces together, you’ll find that your next conflict is easier to get through. Not that any conflict is completely easy, but the more you can build on trust, respect, and inner peace, the less effort that conflicts will require.

Book Review-Range: Why Generalists Triumph in a Specialized World
Scroll to top