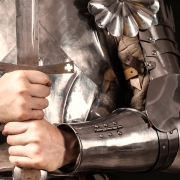 We live in a time of arrogance. We live when people believe they’re better than other people, and they’re entitled to more of the world’s riches than anyone else. In this kind of a world, we’re left with conflicts, as people fight for more than their fair share (despite believing they deserve it). We’re left with a world where people struggle to have respect for one another. The result is more pointless conflict that doesn’t serve to make people better or more whole.

Power Held in Service to Others

The best definition of humility I’ve ever seen is “power held in service to others.” It’s a statement of how the humble person should position themselves. They’re not to become meek or powerless. They’re not to roll over to any breeze that comes by them. Instead, the humble person builds their inner strength to the maximum extent they can. They simply direct that inner strength towards helping others rather than helping themselves.

Humility Is Not Weakness

In Western societies, humility is often seen as weakness. “It’s easy to be humble when you’re powerless” resonates. However, humility shouldn’t be weakness. It should be selfless. Being selfless allows you to leverage your personal strengths for others.

Said differently, humility is not about thinking less of yourself, it’s about thinking about yourself less – thus creating more room to think about others.

The opposite of humility is arrogance – thinking about others less. However, the root of confusion about humility seems similar to the confusion that we have in the Western world about the difference between conviction and arrogance. While arrogance is not caring about others, conviction is being clear about how you care for others.

One can be completely convinced about the thing that they must do and therefore not seek input from everyone. This, on the surface, seems to be arrogance and the opposite of humility, but it only appears this way until you dig deeper and see that there’s no longer the need for input because of the clarity that already exists about how best to help.

If you enter a conflict with conviction but not humility, you’re blinded to how your conviction may be wrong or may conflict with the needs, hopes, and dreams of another person. You may be convinced that every person should have a computer and be blinded to the fact that people are dying of diarrhea and that this may be a more pressing need. (This was the revelation that Bill and Melinda Gates had.)

Humility – the willingness to hold your power for others – is the tempering for conviction that keeps you open to the needs of others while being convinced that your objective is the right one. Whether you decide to change your beliefs because of the conflict or remain firm in your conviction, humility is the tool that keeps us open, listening, and ultimately succeeding in our conflicts.

Book Review-The Years That Matter Most: How College Makes or Breaks Us
Scroll to top