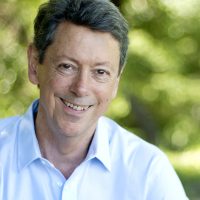 After I read Neurodharma, I got a chance to catch up with Rick Hanson for a phone interview to get his perspectives on the book, what legacy he’s trying to leave, and his perspective on the broader world.

When I asked about the biggest barrier to people cultivating their highest happiness, Hanson responded that people don’t do a little bit of practice each day. He continued that it doesn’t have to be a big thing. It can be something simple. It can be one deep breath. It can be a quick pause to consider their good fortune.

As he and I talked, I began to understand what he meant when he said that he hoped to be a friendly guide to help other people find practices that worked for them and help them avoid the patterns that can hijack their happiness.

When the topic of anger came up, Hanson explained that people do sometimes flare in anger, but he quickly added that they shouldn’t feel as if they needed to feed the beast. I was reminded of an old Internet forum saying: “Don’t feed the trolls.” The thing you provide food to is something that grows. Anger, like trolls, arise, but the key is learning how to process anger and work on paths that lead away from it, not towards it.

Some people, Hanson explained, start doing laps around the rumination track. They get stuck in an event, and they revisit it. We should expect that bad things will happen – and we’ll do bad things. However, we don’t need to dwell in them. We can simply experience them and let them go.

Of course, Buddha said that clinging on to things that are impermanent causes great suffering. This can be true of the feelings we should be letting go of as well. When we hold on to something that is impermanent, we increase suffering.

I ended my conversation with Hanson where we began. Neurodharma is about helping people on the path, not finding the destination. It’s about the everyday slings and arrows of life, not the idealistic picture of lofty mountains and snowy peaks. Spending time doing the practices that Hanson suggests in the book isn’t some sort of spiritual bypass for living your life. It’s a way to live the life you have better – if you use happiness as your measure.