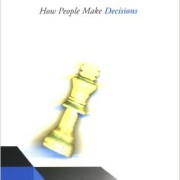 It may seem odd but my quest for resources for my upcoming Information Architecture DVD led me to a book on decsions. Hows’ that? Well, Information Architecture is a funny thing. You’ll never know enough about the problem. You’ll always have to make compromises that are at best uneasy. So I wondered how do people make decisions? How could I provide council on which compromises to make, and which to stay away from. My quest lead me to Sources of Power: How People Make Decisions by Gary Klein. I was a bit worried when I started the book and he was talking about Firefighters. That wasn’t exactly the kind of decision I was most interested in. Sure it’s interesting to know how firefighters make decisions, but what does that do with creating aninformation architecture?

As it turns out, a lot, and nothing. It’s a lot because the book talks about an idea called Recognition Primed Decision (RPD). The short of which is this is where a firefighter would recognize an aspect of the situation that was similar to another experience they had – or a story they heard. From that they would instantly know the right answer. When pressed about how the firefighters made decisions they would respond that they didn’t evaluate options, they just did what seemed like the only option.

I bolded aspect above because it’s key that the firefighters knew which bits of the situation were important – and which ones weren’t through their experience. The experience built up an intuition of what was important and what wasn’t important. It helped them know how to look at their world. So in short, experience does matter. I mentioned in my review of Outliers that purposeful practice is important. Or rather I brought up that Malcolm Gladwell asserts that the outliers have had a chance to get a very large amount of practice. That practice creates a sense of expertise that can not be easily or susinctly communicated.

This experience not only enables intuition but it also enables mental simulations. We all use mental simulations to test how the world around us will react to an action or a statement, but the mental models of masters are better. They are more complex. They see more interactions – and they are more accurate. This is one of those things that I’ve noticed in my work. Some people just seem to be able to identify problems when there’s no supporting evidence – they seem to have a sense for what’s wrong. For instance, I wrote a blog post “Public Service Announcement: Many Technical Problems are Caused by Bad Power” – because I saw lots of quirky things happening as power supplies got a little out of spec.

The book is an interesting read if you’re trying to figure out how experts make better decisions than novices – often under extreme conditions. It’s definitely helped me refine how I look at the decision making process – and how I’m going to go about my next decision.