Book Review-Saving Our Sons: A New Path for Raising Healthy and Resilient Boys 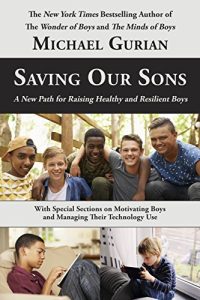 Book Review-Saving Our Sons: A New Path for Raising Healthy and Resilient Boys

Raising all kids today is hard. Since I’ve only attempted to raise kids in today’s environment, I can’t comment about whether it’s harder or easier than previous generations. I can say that the grandparents I talk to tell me that they believe it’s harder. It’s for that reason that every parenting program, resource, and book is a welcome tool to better understand, cope, and succeed in the critical task of parenting. Michael Gurian’s book Saving Our Sons: A New Path for Raising Healthy and Resilient Boys is one tool.

Gurian plays the conclusions fast and loose, sometimes making leaps that would make Superman afraid of heights. Occasionally, he reaches conclusions directly in contrast with intense research. Despite these challenges, he does have important messages to send, messages that should help all parents understand more about the children they care so much for.

The starting point for much of Gurian’s perspective is his belief that we, as a society, see men as the dominant gender. We believe that men unfairly earn more than women. We believe that women are denied opportunities that they should get because of their gender. These perspectives echo feelings of racial minorities in the past and today.

In my experience with friends and colleagues, I’m aware that they (both women and minorities) are discriminated against. In technology, where I’ve spent most of my career, women report being undervalued, overlooked, and, worse yet, harassed. I can tell you that the discrimination, both with women and minorities, is real, because I’ve heard the stories – and, in some cases, I’ve been a firsthand witness to it happening.

However, I’ve also seen the reverse happen. I’ve seen groups of people who hire only from within their group. In Trust: Human Nature and the Reconstitution of Social Order, I learned how different societies value in-family and in-group members to the exclusion of others, and how it negatively impacts their overall economic growth in the long term and limits their ability to grow individual organizations. The needle on the gauge goes both ways. Sometimes the dominant group is excluded too – not as much as minorities or women – but it happens.

If you look at the numbers, men make more than women. However, that’s not the whole story. American boys and men commit suicide at four times the rate of girls and women – despite what we might believe about girls being more emotional and therefore more susceptible to commiting suicide. Boys also account for two-thirds of the Ds and Fs issued in school. (Glasser argues there should be no Fs in Schools Without Failure.) Boys are also four times as likely to be suspended or expelled.

Certainly, there are biases that need to be eliminated. There are inequalities that we need to address; however, it’s not like they’re one-sided. If I gave you these numbers without identifying the gender, you might rightfully claim that there’s a crisis and something must be done. However, because the victims are boys, the concern is ignored.

In a World Without Fathers

Our Kids speaks to the challenges of kids without fathers active in their lives. At the bottom of the socioeconomic ladder, fewer fathers are present. They’re simply missing. As a result, children are being raised by mothers – if they’re being raised by anyone at all. The father’s influence, which might be rough on the edges, is exactly the kind of tumbling that is needed to take the corners and sharp edges off of boys who need a struggle to grow.

It was E.O. Wilson, a biologist, who said, “I have been blessed by brilliant enemies.” This is not to say that fathers are enemies of their boys – far from it. Rather I’m saying that the need for refinement exists in all of us, but particularly in our boys. Fathers are strong sparring partners that allow boys to grow.

Boys will be Boys

Gurian asserts that boys need the rough and tumble life, that life is dangerous for boys and that our overparenting, called “helicopter parenting,” has robbed our children, and particularly our boys, of the growth that they need. By eliminating all possible threats to our boys, we’ve deprived them of the need to overcome.

I’m reminded of the category Balan from the Dyirbal language – the language of the aboriginal people of Australia – that includes fire, women, and dangerous things (which I discovered through Ambient Findability). Boys need to learn about these things with just the right amount of safety.

What happens when boys grow up, but they don’t mature? Are they overgrown man children? Perhaps a man in this case becomes just a tall boy. Aging is assured. Maturing is not. When we deprive our children of stress, challenge, and conflict by depriving them of nothing else, we’ve done them the greatest disservice of all. Why Zebras Don’t Get Ulcers, while cautioning against the downside of chronic stress, extolls the value of short-term stressors. We need stress in our lives to help us mature. We need stress to make us better.

There’s an unfortunate reality that reports of men raping and dominating women have become commonplace. This is unfortunate, in part, because not all the reports are true. It’s more unfortunate because some of them are. Reports of rape – both accurate and inaccurate are thankfully the exception and not the rule. Most men are no longer overgrown man children.

Women don’t need men to lord over them. They don’t need to be victims. For them to express their life, they need to know that they’re equal partners in life. It’s too easy for any of us, including women and men, to move into victimhood and take up permanent residence. (A good place to start on victimhood is Hurtful, Hurt, Hurting.)

Women don’t need men who are carbon copies of themselves, they need men with character, who are powerful in their ability to support and grow with the women that they care about.

Gurian speaks of three families: the nuclear, the extended, and the community. Robert Putnam speaks of the decline of this social capital in Bowling Alone and the decline of the nuclear family in Our Kids. Our social fabric is straining to stay intact. Our mobile world has moved us farther from our extended families and has transplanted us from one community to another several times during the course of our lives. The structure that we have to help raise our children is different than it was.

I can remember being told to go out and have fun. Others I know have told me that their parents told them to go out until the street lights turn on – and then to return for dinner. Children didn’t have cell phones or even wrist watches. There was a natural order to things that we’ve disrupted. Ironically, the fact that we’re more connected makes us more distant. (See Alone Together for how technology is changing our relationships.)

Today, parents who allow their children to walk to the park unsupervised are considered criminals, because they put their children at undue risk. They’re considered neglectful for not walking down the block. The ways that used to work to raise children are no longer trusted. Strangely, the actual number of crimes against children isn’t appreciably increasing; however, our awareness and hysteria about it is.

Providing nuclear family support for the growth of our children (and specifically boys) has become more and more challenging. No longer do we have regular contact with our extended families, and as we pick up that role, we’re also warier of our communities.

It’s no secret that, stereotypically, men and women process thoughts and emotions differently. What isn’t well known or understood is that the way that boys process information is less about rumination and more about processing for completion. Women turn over ideas like a dryer, continuously tumbling them until they’re dry and then occasionally running them on an anti-wrinkle cycle. Men, on the other hand, process information, decisions, etc., for completion.

Instead of the idea being stuck in an endless anti-wrinkle cycle of being turned over, they’re processed and done. This can free a man’s mind from the tyranny of reconsideration. Processing allows freedom, where rumination is enslaving.

Gurian encourages everyone to perform what he calls “citizen science.” That is, he’s encouraging experimentation and testing of hypotheses. I consider the idea that you would explore and test your world something to applaud but the idea of calling it “citizen science” deplorable. The problem is in our human nature. We’ve got confirmation bias that tells us we’ll find what we’re looking for. (See Thinking, Fast and Slow for more on biases.)

By applying citizen science without controls and observation, we’re quite likely to reach the wrong conclusion. In the end, I believe some of the gravest errors that Gurian makes are because he’s performed citizen science on too small of sample sizes and his confirmation bias has gotten the better of him.

I do, however, invite you to try your own citizen science and look with a careful eye at Saving Our Sons – you’ll likely find some things you agree with and some that you don’t.