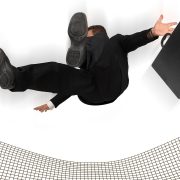 “Bearer of risk.” That’s the way Richard Cantillon described an entrepreneur. The funny thing about it is that while the public believes that entrepreneurs are a risky lot, they spend a lot of thought, energy, and time to mitigate and manage risks. Risk and its management is the central theme to entrepreneurs.

I was pondering the challenges of small business as I was chatting with my friends at corporate jobs. Every year or so, Microsoft holds an MVP summit, which collects two thousand MVPs with hundreds of Microsoft employees so that they have the chance to share information and feedback. Since most of the MVPs are at small organizations – typically one-person consulting organizations – and Microsoft is a much larger organization, it’s a mashup of small business entrepreneurs and large business politics.

In the conversations we had, I realized that many of my friends who now work for Microsoft were, at least at one time or another, entrepreneurs. They had their own small consulting organizations. They ran their own companies. They had a fire in their belly to change the world through their individual contribution. Some were lured away by the promise of benefits and a steady paycheck. Some were nudged into the role by spouses or significant others who couldn’t accept the high degree of variability in pay that they were making as entrepreneurs.

In the end, with only a few exceptions, the people at Microsoft were entrepreneurs, and they didn’t survive as entrepreneurs. Whether it was a choice to reduce the strain or to feed themselves and their families, for the most part the converts were the entrepreneurs who could no longer bear the risk.

“Chance favors the prepared,” said Louis Pasteur. Here, he uses chance, where today we’d use the word luck. He was speaking about preparation and timing and the need to be ready. Many like to believe that success is a formula that can be followed. You put raw ingredients in on one end, and on the other end, you get the completed sausage called success. However, this ignores the fact that even wildly successful people fail sometimes. If we believe that there’s a deterministic formula to follow, how do we explain failures?

I’ve been incredibly blessed to have been a full-time entrepreneur for more than the last dozen years. I wanted to offer three tips on how to survive long enough to get lucky.