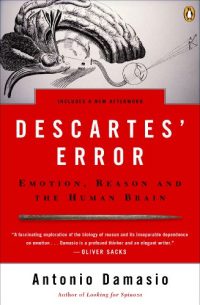 I think, therefore I am. Reason never had a stronger advocate than Descartes. However, Descartes encapsulated all that is human into our rational thought, and in doing so separated the inseparable connection between reason and emotion – at least, that’s Antonio Damasio’s argument in Descartes’ Error: Emotion, Reason, and the Human Brain. Damasio’s in good company. How Emotions Are Made and The Tell-Tale Brain both agree that the relationship between emotions and reason is complex. Daniel Kahneman expresses a similar sentiment in Thinking, Fast and Slow when he explains that our automatic processing (System 1) can mislead our rational thinking brain (System 2).

At the heart of Damasio’s argument is the belief that emotions can be helpful to rational behavior – that without the capacity for emotions, rational thought is robbed of its power and drive. Through the study of patients with neurological trauma in various regions of their brain and using neural imaging (mostly fMRI), his research led him to a hypothesis of somatic markers that inform the reasoning process.

The reasoning is basically that the primary emotions we feel shape the way we reason our way through problems.

There’s a reasonable case to be made that what we attribute to our brains occurs more broadly in our bodies. Our hearts and our digestive systems both have substantial neurons. There’s direct imaging to couple patterns of activation in our brains to various emotional states and thinking patterns. However, that imaging doesn’t preclude activation in other parts of our body.

Given the electrochemical nature of the signaling the brain uses – and the apparent ability for the heart to reject that signaling – it’s not hard to believe that sometimes our bodies have a mind of their own.

Similarly, learning from the experience with those suffering from phantom limb syndrome and the treatments that rely on creating a visualization of the amputated arm, it’s a reasonable hypothesis that our brains rely on the constant signaling from our bodies to shape their processing. When robbed of this data, they sometimes end up in altered states. It seems like the body is our ground state – our frame of reference – for our thinking, and without it, we’re not in our right minds.

One of the tragedies of our modern society is that we vilify those with psychological issues. Those people for whom we cannot find biological defect are considered diabolical. Those with observable physical issues due to disease or trauma are somehow not considered accountable for their actions like those with mental illnesses are.

It seems as if we’ve developed the attitude that hardware (physical) issues are not the responsibility of the person but somehow software (psychological) issues are their responsibility. While this makes little sense, the prejudice exists and creates guilt and shame for those who are suffering.

The truth is that we’re not a blank slate when we’re born, nor are we fully written. (See The Blank Slate and No Two Alike for more on this line of thinking.) We’re born with enough preprogrammed in so that we can survive and a set of genetic factors that move us towards some ways of growth, but we’re substantially formed by the environment that we’re raised in. Adverse childhood experiences have a substantial impact on our adult lives. (See How Children Succeed for more.) Our adult diseases can even come from fetal origins. (See Why Zebras Don’t Get Ulcers for more.)

If Damasio is correct, then the pages are rewritten as our body changes, and our emotions are formed from the signals our bodies are sending us. If he’s right, then that is truly Descartes’ Error.

PrevPreviousVideo Studio 3.0
NextBook Review-Building a StoryBrand: Clarify Your Message So Customers Will ListenNext