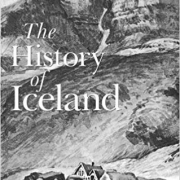 I’m by no means a history buff, but there’s something about Iceland that drew me in and made me want to understand the story behind the island nation in the North Atlantic. The History of Iceland is a tome about the Icelandic people and how this amazing island came to be.

My interest started with an invitation to deliver a keynote presentation to the Icelandic Records Management Association. Iceland arose from the deep recesses of my memory as a place that seemed wild and different. I accepted the invitation and began learning about the island, the people, and the history.

The more I learned about Iceland, the more interested I became.

The first bit to understand is where it is. It sits on the fault line between the tectonic plates that North America and Europe sit on. The gaps between the plates created a way for lava to flow up and create the land mass that is Iceland.

Though it’s very far west compared to European countries, the time zone that it observes is GMT/UTC. That means it’s on the same time as London, and five hours ahead of the US Eastern Time Zone. The time zone is as good as any other, since there’s plenty of light in the summer and not much in the winter due to its very high longitude.

However, the relatively low habitation means that it’s a great place to see the northern lights. (Or so I’m told — we did get to see them on our visit.)

The initial settlement was by the Vikings, and because of the rugged nature and some misfortunes, the island struggled to reach and maintain a population of 50,000 people. Modern day Iceland boasts roughly 400,000 people – roughly 40% of which live in the capital of Reykjavik and the surrounding area.

As a result of their heritage – and failure to desire independence – they remained subject to the king of Norway and eventually Denmark. Independence was officially conveyed in 1944. However, in an odd turn of events, not a single shot was fired. Independence was granted without a fight.

Through the ages, Iceland had a largely decentralized government. Though subject to the King of Norway, the King largely left the Icelanders alone. It seems like no one really wanted to put up much of a fight over Iceland. In fact, the Danish rule of Iceland was overthrown by the capture of a single person.

Icelanders have, reportedly, protected their national image of neutrality and defenselessness. Having a national identity in defenselessness is to me – an American – a very foreign concept. However, for a country that’s spent most of its history largely undefended, the concept seems to make sense.

The early history of Iceland required that everyone have or work on a farm. While it seems like fishing would be a primary commercial activity, the Icelandic people are described as sedentary pastoralists. That is, they would live off farms and livestock. Fishing, while done in the winter months, wasn’t a full-time vocation for centuries.

Today, marine products may make up 70-80% of exports, coming down from an estimated high of 90% in the 1940s through 1960s. So, while there are still many farms, most of what is grown locally is eaten locally. Fishing became so important that Iceland extended its fishing rights from 2 miles to 4 miles to 12 miles and, ultimately, to 50 miles and 200 miles. The extension of the fishing around the island was the cause for the only real “war” the island had when the British had a different idea of where their trawlers should be able to fish.

What’s in a Name

Iceland is greener than Greenland, and that’s a bit of marketing by Erik the Red. He figured if it had a good name, then men might like to come there. Iceland had no such marketing-based name, thus there’s a reversal of conditions between Greenland and Iceland.

There’s another name-based uniqueness in Iceland. They don’t use family (or sur-) names. Instead they use patronymics. That is, your second name is the name of your father or mother followed by son or daughter. To trace your lineage, you track back through the names of your ancestors one at a time instead of claiming and continuing a family name. The result, I’m told, is a propensity to just use first names, even if you’re not very familiar with the person to whom you’re speaking.

Though initially the island was settled in pagan times with pagan chieftains, the island was converted to Christianity in 999 or 1,000 A.D. through public decree at the big meeting – called Althing – after a dispute was brought forward because of the different laws that were being followed by the pagans and Christians on the island. With a non-existent centralized government, it made sense that there needed to be an agreement on what the laws should be.

Christianity in countries outside of Iceland would ultimately prove to be a boon to Iceland because of the decision that fish didn’t count as meat when it came to fasts – particularly during Lent. There was an increase in demand for fish since it was allowed during fasts.

Christianity becoming the law of the land would ultimately drive literacy but not always in the most straightforward manner. Literacy was defined as the ability to recite Luther’s catechism (summary of principles as a question and answer), while literacy in other countries at the time was the ability to write your name. Despite this, the requirement that children be “literate” before they were confirmed started the process of learning.

Real literacy came from the humble beginnings of Christianity. Children were required to be literate and this eventually transformed into the kind of literacy (reading and writing) that we expect today. However, adults were often concerned that the effort spent learning to read and write would prevent the children from doing their work on the farm. So, like all good teenagers, the thing that was forbidden became the thing they did. They would often learn how to read and write in secret despite the concerns and sometimes instructions of their parents.

Today, Iceland has a love affair with books – both reading and writing. Much of this love affair can be attributed to generations of literacy – and probably at least to some degree due to the lack of distractions. Radio and televisions service came to Iceland late – and only due to the American base.

A network of neighbors and churches along with some interesting economic policies kept unemployment low in Iceland. Unemployment didn’t officially exist in a unified way until 1956. Perhaps that’s because being able to work – but not working – was considered a crime. It may also be related to the fact that if you had received public assistance you would likely not be allowed to marry. (Which was mostly a sign that you intended to have children.)

The other policies that led to people working was as high rate of inflation that made it useful to spend your money when you had it – generating a demand for labor – so that it would not become devalued. This high demand for labor and the societal stigma surrounding not working likely kept the rate low.

As I prepared travel to Iceland to get a chance to learn more about these amazing people and this amazing land, I looked at my research as a kind of social support as I felt more prepared to take in all that Iceland had to offer. The History of Iceland is amazing. I’m grateful to have read it before I experienced the island.