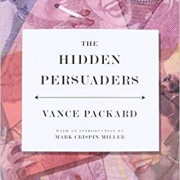 I can remember as a child sending off a letter about an idea that I thought was powerful. It came from a story I ran across about a movie theatre that ran subliminal advertising for their concession stand. The idea was that the advertising was conveyed in a single frame. It was too short to be perceived by the audience consciously but apparently was quite effective at selling popcorn. I found a reference to this movie theatre popcorn situation in The Hidden Persuaders. Though Vance Packard, the author, treats the recollection with skepticism, I wondered as a child how this could be used for good – rather than commerce.

I don’t remember who the letter was sent to, but, being a kid, I assume I wrote the President of the United States. The idea was to leverage subliminal messaging in prisons to attempt to adjust criminal behavior. An answer came back, I think from the Department of Corrections, that the FCC had issued a rule banning the use of subliminal advertising, and that was that for me.

However, after picking up Influence and Pre-Suasion, I wanted to go back and dig into the stories about how advertisers in the 1950s and 1960s started paying attention to psychology and how they could manipulate people in ways that weren’t expected. What I found in The Hidden Persuaders was strangely familiar and foreign at the same time.

We are, in many ways, a consumerism-based society in the United States. We as a people follow fashions, replace our cars every few years, and practice retail therapy when we’re feeling down. (Retail therapy is buying something to feel better.)

The overwhelming array of choices we face has transformed, from awe at what is available to us now that only royalty would have been able to afford a few centuries ago to a sense of entitlement that we must have all these things. However, at the heart of this isn’t the item itself: it’s how it makes us feel. We feel like “I deserve this” or “I’ve earned this.” The “this” we’re referring to is the feeling of beauty, freedom, status, or any of the other desirables that we want to believe we are – but don’t always feel like we are.

An interesting dynamic to this is that we buy things expecting they’ll make us feel better about ourselves; however, they don’t. We expect that a new car will refresh our vitality, but it doesn’t. We want to impress others by wearing a status symbol and are disappointed when our friends and peers purchased the same thing. How are we supposed to demonstrate our superiority if we’re constantly being copied – and are copying others?

We are willing to go to remarkable lengths to do what we say we’re going to do and maintain our public image. When people are looking, we will bend our preferences to support the identity that we believe other people expect of us, as we learned in Pre-Suasion. However, we feel no compunction to behave consistently with our answers if we don’t expect that people are looking.

Marketers have long known that people will answer one way and then behave in a totally different way. You ask them to commit to a course of action, but if they don’t feel they’re being watched when it comes time to take that action, their previous answer will likely not have much impact on their behavior. We want to be seen as rational, reliable, intelligent, and consistent people, when that’s rarely the way we are. We store up our reliability for those times when we believe we’re being watched. Even then, we often behave in ways that aren’t objectively rational.

I’m the Most Important Topic to Me

Nothing appeals more to someone than themselves. It’s not exactly new news – it wasn’t even new news when The Hidden Persuaders was first published – but it is profound. We spend time trying to get people to be interested in something else – or someone else like ourselves – but we fail to recognize that, at the end of the day, what everyone is most interested in is themselves. While this news may seem like bad news to those who want to motivate us, nothing could be further from the truth.

While when stated directly, it may seem far-fetched for someone to believe that a product can make them stronger or more beautiful in an intrinsic sort of way. But this is exactly the way we’re sold to every day. Having the latest phone doesn’t appreciably change the features for most folks, but it sends a signal about the kind of person you are – and if you’re that kind of person, you deserve a phone.

We use the things we own as proxies for who we are. Are we dog owners? Are we townhome kinds of folks? The things we have shape how others perceive us – or, perhaps more accurately, how we project what we want others to see. Once an object has been imbued with meaning, the meaning tends to stick. This is how brands work. They associate a characteristic or a feeling to a product, and then the product is sold based on the characteristic.

Nowhere is this truer than in the American love affair with cars. There are truck people, SUV people, minivan people, sports car people, sedan people, and other variants too numerous to mention. When you hear about the kind of car they own, most people begin to form images in their heads of the kinds of people we’re talking about. Truck people are rough and tumble. Minivan people have a lot of kids to be transported to soccer games – too many to fit in an SUV. Sports car people are wild and adventurous; sedan people are refined and reserved.

The truth is that the automobile industry reinforces these images. It tries to convince us that, if we just bought their car, we’d regain some aspect of our lives that we’ve lost (or never had). The innovation of the hard top is one of those success stories.

The Wife and the Mistress

Dr. Dichter, one of the key players in the act of peering into our minds to sell us merchandise, says that men settle down with a practical, down-to-earth, and safe person. The wife, in his analogy, is a sedan. He continues, however, that in his perspective, a man never forgets his desire for youthful passion. Convertibles were this image of vitality, excitement, and passion. He considered the convertible the mistress. Convertibles were, at the time, canvas, because of the need to fold.

The introduction of the hard top, he argued, would be like the best of both worlds: the perceived safety and stability of a sedan and the excitement and toplessness of the convertible. Thus, a single car could help a consumer fulfill two aspects they have of themselves. They wouldn’t need to deny a part of themselves when they’re buying a car – or in their lives.

Masters of the marketing game find ways to leverage these different aspects of products in a way that allows a product to be seen differently by different audiences. Younger adults see smoking as a way for them to look older, while older adults seek it to regain their youth. Both groups see the same set of products, but they see different facets of the products in ways that drive their interest.

The different perspectives for different audiences may be difficult to master and ever-changing, but, done well, it can be a powerful way to drive demand for your product.

Of course, where there is a positive side, there is also the potential for a negative side. When you attempt to introduce an aspect of a product, it can conflict with core messaging or reason why people buy your product, as Jell-O found out. Jell-O is a convenient, inexpensive desert. It’s the kind of thing that you can do and not worry about it too much.

When Jell-O started running ads with these impressive, multi-color, molded creations, sales dropped. It turns out that people didn’t want to compete with what they were seeing in the ads. They wanted to be able to do something simple, and the beautiful creations interfered with that.

When we’re motivating people with features, we must expect that we may accidentally trigger a response we don’t want.

Traditional thinking is that higher prices result in less sales; however, the reverse is often true. As Predictably Irrational exposes, people use price as a signal for quality. If it’s low-priced, it must be junk. Thus, if the prices are high, it must be good. Whether it’s black pearls, turquoise, or anything else that people don’t know about, they’ll use price as a proxy for goodness.

Related to this is the awareness that people make decisions about how well they’re going to treat themselves, particularly with things that have no fixed price, like art or jewelry. The result is they go looking for something that matches the range they have set out to spend on themselves. Then they buy something in that range – or generally slightly above it.

Price should be about the exchange of money and should be logical, but it’s not. It operates in a different world of feelings and perspectives.

Another, unfortunate, thing that can be triggered in us irrational humans is being overwhelmed by panic. There is a state we can enter where we don’t feel like we know what to do. We’re overwhelmed, and we can’t process anything. It can be that we’ve got sensory overload (see The Signal and the Noise for more). It may also be that, in our quick assessment of whatever is going on, we’ve decided there’s nothing we can do. (See Emotion and Adaptation.) Said differently, we may have rapidly lost hope that there’s a way out of the situation. (See The Psychology of Hope.) Irrespective of the cause, the result is the same. The result is that we’ll do nothing. That’s why it’s important when communicating with the market that you don’t create panic, because the result is generally a lack of action.

Hopefully, you’ll decide that it’s time to look behind the curtain and find out more about The Hidden Persuaders.