Blog
You are here: Home1 / Blog2 / Personal3 / When You Should Not Get the COVID-19 Vaccine 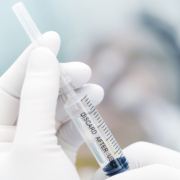 At this point, almost everyone knows someone who has had COVID-19. A year or more ago, that wasn’t the case. It was possible to say that it’s not real or it’s like the common cold. In fact, the likelihood is that if someone we knew had the disease, they got better. For some, it was no worse than a cold. For others, it was more severe – more like a bad case of the flu.

So, while we accept that it’s real, it’s harder to accept the real impacts of it. When we hear that more than half a million people in the United States have died because of COVID-19, it’s hard to wrap our head around if we don’t know anyone personally. The truth is that the chances of someone who is infected with COVID-19 dying is less than 1% (~0.6%).

Of course, the next belief is that those people who do die from COVID-19 are all feeble and, in some cases, “were going to die anyway.” We’re all going to die at some point. That doesn’t stop us from convicting a murderer for bringing on the outcome sooner. Much has been made of inflating the COVID-19 mortality numbers by including people with “comorbidities.” That is, they were already compromised by something else.

Maybe that’s true, but the unfortunate fact of American life is that most of us have some form of comorbidity – something that’s hastening our path towards the grave. Whether it’s cardiovascular disease, chronic obstructive pulmonary disease, diabetes, asthma, hypertension, and/or cancer, slightly less than half of Americans (45.4%) have something. It’s not so easy to dismiss that the people dying were going to die already when you realize how many of us have chronic conditions that would put us in that category.

With all these statistics, it’s no wonder that few of us have seen people die of COVID-19. We’d have to know 100 people with COVID-19 to see one death. Personally, I’ve lost a brother-in-law, a high school friend was hospitalized for five months, and my daughter wasn’t able to work for five months. I clearly must know more than 100 people. If we shift the focus to hospitalization for COVID-19, the rate goes up. If you are in your fifties, it’s about 5%; by the time you’re in your eighties, it’s about 33%. Clearly, the older you are, the higher the chances you’ll be hospitalized or die.

Many younger people think to themselves, rightly so, that their chances of getting the disease and needing to be hospitalized are low. For them, that’s fine; however, the real problem is not the person themselves but those they come in contact with. Some losses are just unacceptable. When you go to see your beloved grandmother and infect her without realizing it, you’ll feel terrible. What about that older man or woman who has always looked out for you, whose wise counsel you’ll dearly miss when it’s gone? What happens if they get sick?

If too many of them end up in the hospital, the hospital will fill up and won’t be able to accept more patients. It’s tragic enough to get the disease and need to go to the hospital. It’s even worse when you’re told there are no beds available at the hospital, and you’ll have to figure out something else. Most people have never experienced being turned away at a hospital, so the idea that it could happen doesn’t feel like a possibility.

The challenge isn’t just that you can be careful and not infect folks. Even if you isolate yourself as soon as you feel symptoms coming on, it’s too late. You’re contagious and potentially infecting others up to two days before you feel symptoms personally. That’s one of the reasons that so many people are being infected. With the original COVID-19 disease, each infected person on average infected 1-2 people. With the Delta variant, the number is 5-8 people – in that way, it’s like chicken pox.

While there are current discussions about when to wear a mask and when it’s not necessary, there’s a broader question about the efficacy. There are a number of variables involved when people are wearing homemade masks and when the masks are made of varying materials. Getting to well-researched numbers is difficult. What we do know is that the particles that transport COVID-19 are slowed by masks – in both directions.

Excuse the crude example, but if you spit at someone, your chances are much better of hitting them if there’s not a screen door between you – and even less if there are two screen doors. Sure, the COVID-19 virus itself is small, but it needs something to ride on to get to someone else, and those “somethings” are collectively larger. Any sort of barrier will reduce what makes it through.

As a general statement, vaccines are safe and effective. We’ve all had vaccines since we were children. These vaccines have eradicated polio and have substantially reduced the incidence of measles, mumps, and rubella. We’ve pushed back tetanus, diphtheria, and pertussis. The problems with the vaccines have generally been very rare.

In fact, the government stepped in to create the National Vaccine Injury Compensation Program. It’s a small fee with each vaccine dose that’s collected automatically and is held to compensate those who do have an issue with a vaccine. The current cost per vaccine is $0.75. Clearly, the number of people harmed by vaccines is very small, because the fund could not operate with those kind of fee rates if the incidence of claims was very high.

The other major concern regarding vaccines comes in the form of a single article published in the prestigious Lancet journal. In the article, the lead investigator, Andrew Wakefield, claimed that children developed autism after receiving the MMR (measles, mumps, and rubella) vaccine. As a direct result of that article, the physician lost his license to practice medicine. The Lancet published a very public retraction. What wasn’t known at the time was the conflict of interest that Dr. Wakefield had in the publishing of the article.

The loss of a medical license is a serious issue – particularly when no patients were directly harmed. It’s a powerful statement about how grievous the community felt Dr. Wakefield’s ethical problems were. Despite the public condemnation of his behavior, many are still concerned about the potential of causing autism in their children with vaccines.

It’s hard to think that something you’re doing – authorizing to have your child receive a vaccine – could be harming them. It’s easier to think that you did nothing and take your chances with the diseases that the vaccine is designed to prevent. However, there is no scientifically validated link between autism and vaccines – it’s just not there.

The most widely studied vaccines in the history of mankind are the COVID-19 vaccines. It’s counter-intuitive, but it’s true. While studies aren’t complete, and there is still more to learn, the communications and information technologies have made it possible to use much larger study sizes and to more precisely track the symptoms after receiving the vaccine.

The two different approaches are used in the development of COVID-19 vaccines. The first approach involves messenger RNA that’s been used since the 1980s. The messenger RNA (mRNA) approach used by both Pfizer and Moderna tricks some cells into creating the characteristic protein spike for the COVID-19 virus that the immune system needs to learn how to identify.

The second approach, used by J&J (Johnson & Johnson) uses a modified version of a different virus to deliver important instructions to the cells. The cells then produce the spike protein that our immune system learns to defend against. Both result in the production of a harmless spike protein that is found on the surface of the COVID-19 virus.

For both approaches, these protein spikes don’t do anything on their own: the immune system recognizes them as foreign and gets an opportunity to learn to attack and contain them without the threat of the virus.

We can’t know the long-term impacts of this vaccine, but we do know that the technologies used are well known and well used. Much of the vaccine development was already done but not tested because of other outbreaks, including SARS in Canada, and MERS. The coronavirus has been with us for a long time, and we’ve previously seen mutations of the virus that became more impactful to humans. COVID-19 (and the Delta variant) is simply the latest set of mutations of this virus, which happened to have unlocked a pattern that’s more deadly to humans.

What We Know Without Vaccines

Much has been made of the unprecedented nature of the COVID-19 virus. However, we do have another analog. Just over 100 years ago, influenza, known as the Spanish Flu (only because the Spaniards were willing to openly discuss it), infected roughly a third of the world population (~500 million people) in four waves with a death toll between 20-100 million of those infected.

Without the benefits of vaccines and other tools of modern healthcare, that pandemic took somewhere between 1.5 to 6 percent of the population.

There are, in fact, reactions to vaccines in general. There are people who are allergic to any of the ingredients in a COVID-19 vaccine who should not get that vaccine. If you have had a severe or immediate allergic reaction to any ingredient in the mRNA vaccine, you should not get either of the currently available mRNA COVID-19 vaccines. On the other hand, people who have underlying medical conditions, including immunosuppressed individuals, are at an increased risk for severe illness from COVID-19 and are recommended to receive the COVID-19 vaccination. For those who do receive the vaccine, the rate of reaction is very low. The most typical response is some pain or redness around the location of the shot itself followed by headache or fever.

There are more serious reactions, such as a specific form of blood clots, which occurred at a rate of about 120 per billion doses. To put that in perspective, you’re about 60 times more likely to be struck by lightning. Reports of Guillain-Barre Syndrome happened at the rate of about 1 in 100,000 for the Johnson and Johnson vaccine. Which is still very, very unlikely. Guillain-Barre Syndrome is also associated with the COVID-19 virus itself. It’s unclear whether the patients affected would have been impacted the same way with the virus or at the same rate. There’s just not enough data to make a firm conclusion. While Guillain-Barre Syndrome doesn’t frequently cause death, it can have a serious impact on quality of life.

The final complication that is being tracked as a possible side effect of the mRNA vaccines is an inflammation of the heart muscle (myocarditis or pericarditis), which happened at a rate of about 2 per million. Putting this in perspective, you’re about 5.5 times more likely to die of dog attack in your life.

So, while there are reasons to not get the vaccine, do they apply to you? If they do, maybe you can pass this along to those in your world who believe that they shouldn’t get the vaccine.

Book Review-Fault Lines: Fractured Families and How to Mend Them
Scroll to top
%d bloggers like this: