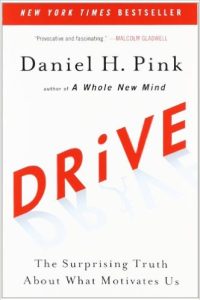 What makes you get up in the morning? Chances are it’s not your desire to conquer the world, unless you’re The Brain. One of the really crazy parts about working with SharePoint adoption is realizing how little we know about motivating users. In his book Drive Daniel Pink tears apart what we think we know about motivation. We all know that carrots and sticks work – or do they? They work when the task being performed is algorithmic – predictable – but they don’t seem to work as well when the task is heuristic. In other words, carrots and sticks work when you don’t have to think. Given that most of the folks that I work with have to think, carrots and sticks don’t seem to be the right answer.

Economics would seem to be the study of money – but it’s not. Economics is the study of human behavior – as it relates to money. We used to think that bonuses lead to better performance but there is a plenty of research now that says that this isn’t the case. It turns out that people don’t always behave in their own best financial interests – and those that do create their own problems (think financial crisis, housing melt down, etc.) There’s a standard economic experiment called the Ultimatum game. In the game there are two parties. The first person gets to decide how to split the money. The second person gets to decide whether either of the parties gets to keep their share. If they second party doesn’t like the offer they both walk away with nothing. If you give this to an economist who believes that people always behave in their own best interests would think that as long as the second person is going to get more than nothing they would always opt that both people would get money. However, in most case when the split is less than 20% for the second party they reject the offer and both parties walk away with nothing. Clearly there’s more going on here than financial best interests.

It turns out that there’s plenty of research that says that we just don’t do that. Larger rewards for larger performance can sometimes lead to reduced performance. Irrational – yes. True – Yes.

Maslow would be confused since his hierarchy of needs doesn’t make any sense when you consider that people are willing to be artists and starve to get the freedom and mastery of their craft that they want. There’s something going on that Maslow didn’t see. There’s an internal motivation and intrinsic drive happening. The crazy part is that this intrinsic drive doesn’t have a chance against the carrot-and-the-stick. It’s really turned upside down. Consider the act of giving blood. It’s an important part of our healthcare system. There are all sorts of rewards for giving blood but money is rarely one of them. Why? People give blood because they want to help others. If they’re paid for it they don’t believe their motives are pure. If someone is paid for giving blood they will give less. (As a sidebar it is OK if that money gets diverted to a charity.)

Drive puts forward the idea that there are three key things that people really want:

It’s refreshing to give my thoughts about how to motivate people a dust-off to see how valid they really are – and how they fail me.