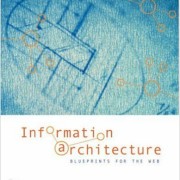 There’s one statement that is definite truth, there’s no mystery in how Information Architecture: Blueprints for the Web approaches IA. It’s all about the web – and why shouldn’t be. If we’re accessing information today we’re likely doing it via the web. Whether it’s an internet web site that sells Shepherd’s crooks or a corporate intranet, we’re spending more and more of our time consuming information in a browser.

The book is a good, straight forward guide to developing an information architecture. From reminding us that you have to do good thinking first and then write it down, the book gently reminds us that Information Architecture isn’t about one thing – it’s about blending multiple things together to get them to come out right. I’ve seen situations where people just start writing down stuff – skipping the good thinking – and places where the thinking was great but they neglected to write it down. You need both for success.

I was flying out to SharePoint Connections in Las Vegas while writing this and I was quietly watching how people made it through the airport. There were folks following the flow, and folks who were trying to process each decision. It resonated with the wayfinding topics in the book and how it’s essential to help folks know where they are at all times. This is signs in an airport and typically breadcrumbs in a web site. If you’re starting to study IA I recommend you keep your eyes open for people getting lost in the places you go everyday – libraries, airports, churches, etc., it’s really intriguing from the perspective of ensuring that you show context all the time.

There were some interesting – if not contradictory – statements about the placement of navigation. How people expect things to be – and how much they’re willing to adapt. Note that I don’t see contradictory statements as a problem – it just means there’s a space between the two statements. There’s also a very useful conversation about: global, local, utility, and associative navigation that’s a good break down of the topic. Mostly it applies to Ecommerce and public web sites but it can be applied to Intranets as well. The key question, “The user succeeded, now what?” is often missed in our desire to breakdown tests and use cases into descrete units.

The book supposes that users come to your site to: find something, do something ,or kill time. (I can’t help but think – how can one kill time without injuring eternity.) Generally speaking, I think this is true. The trick is far to few Intranet projects of which I’ve been apart can articulate what the user wants to find – or what they want to do. It’s a place where I don’t believe there’s much clarity across the board.

The final thing about the book that I felt was helpful was the way that it covered social technologies. I generally read “Social is great, use it for everything.” Or “Social is a fad, ignore it.” Speaking as someone who’s been trying to understand this space for a while, I can say that the balanced view where there are conversations of moving tags into keywords and the problems of social including the one that most folks want to ignore – cold start. Cold start is when the system has nothing in it so users don’t know what to do – there is no normal yet. So it’s hard to get started. It’s also been called inertia (getting the first person to act) and critical mass (getting the system up and running to the point where it sustains itself.)

The Making of a SharePoint Shepherd Photo
Scroll to top