Blog
You are here: Home1 / Blog2 / Book Review3 / Book Review-Switch: How to Change Things When Change is Hard 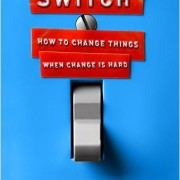 When is change easy? Switch sets out to make it easier to accomplish change in your organization, and your life. One of the things that my friends and colleagues call me is a change agent — that is like a catalyst I help drive changes into organizations. Most of the time, I describe that process as a framing process. I’m framing how things look when they’re running correctly. It’s often subtle little things that need to be fixed – a simple check on a requirement for whether it’s measurable or not. Other times it’s creating awareness that some kinds of problems are ordinary, normal, and candidly a sign of danger if they are missing.

Switch is based on a sustained metaphor. The metaphor is this. Humans are like a rider on top of an elephant. The rider is our logical, analytical, consciousness. The elephant is our emotional self with all of its instincts – and power. The rider and elephant are headed down a path. Fundamental to understanding the model is that the rider cannot make the elephant go where the elephant doesn’t want to go or stop going where you don’t want –unless, perhaps, you change the path. (the environment) The rider may be able to reign in the elephant for a while. The rider might be able to prod the elephant on. However, ultimately the control the rider has over the elephant is an exhaustible resource. The rider will get tired and the elephant will get his way.

We spend most of our lives with the rider quietly sitting atop the elephant, not providing the elephant much direction and the elephant walking down a well-worn path. If you don’t believe me, tell me about your drive into work or your drive home. If you’re like most people you won’t remember it. In fact you didn’t remember it the moment you pulled into the driveway. This is a good thing (sort of) because it means the rider doesn’t have to use his exhaustible resource on the elephant. The elephant already knows the way home. However, what are we doing with change? We’re asking the elephant to go off the well-known path. We’re using our rider to prod and direct the elephant off the common paths. If you’ve ever ridden an animal you’ll know that they have this instinctive pull to do what’s comfortable and what they expect. Get on a horse on the way back to the barn at dinner time and he’ll be in a dead run.

There are some funny misconceptions that we have about what causes change. We believe that people are ignorant of the reasons why their current path is bad. A smoker isn’t ignorant of the harmful health effects of smoking. It is, however, the path that’s in front of their elephant. A drug addict isn’t startled when someone in passing mentions that he might be harming himself. Knowledge doesn’t change behavior. Behavior change – and change in general is a SEE-FEEL-CHANGE proposition. The person has to internalize the knowledge. They have to feel the real pain before behavior will change. This works pretty well for individuals – but not necessarily so well at a corporate level.

The best part of the book for me was a question – -a single question “Suppose that you go to bed tonight and sleep well. Sometime, in the middle of the night, while you were sleeping, a miracle happens and all the troubles that you brought here are resolved. When you wake up in the morning, what’s the first small sign you’d see that would make you think ‘Well, something must have happened – the problem is gone!'” Wow. Basically you’re forcing the person to talk about a future state when the problem is gone (change has been completed). You’re also getting specific behaviors that could be created to move things in the right direction. It reminds me of one of my favorite elicitation questions “If you had a magic wand, what would you do?” Or the similar “If you could do just one thing, what would it be?”

I want to end with a final point from the book. Our rational rider seeks solutions which are commiserate with the size of the problem. A big problem needs a big solution. However, in life this is often not the case. A small course correction can make a huge impact if it’s done at the right time. (Think rocket maneuvers.) The really interesting thing is that from the top of the seesaw it’s hard to see where the fulcrum is. You should retrain your rider to think about shrinking the gap between where you want to be and where you are now. Help them slide that fulcrum just a bit to cause larger and larger changes.

While there are certainly more process oriented, more detailed, books to read on creating change – like Leading Change – but Switch is more likely to capture your heart (elephant) and mind (rider).

Book Review-Mindset: The New Psychology of Success
Scroll to top