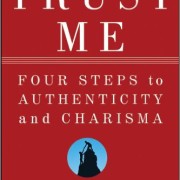 It might seem odd that one of my most recent book reviews was Humilitas and focused on humility and now I’m reading about charisma. Perhaps your thinking is that the humility thing was just a phase. However, my favorite thought about humility is “power held in service of others.” One of the things that I’ve realized is that my intent is good. I really do want to help folks get more value out of technology, but sometimes the message doesn’t come out right. I’m like the awkward teenager at a dance, unable to make what’s in my heart come out clearly. I realize that we have all had at least one of these moments – even if it wasn’t at a dance. The thinking for me is to minimize the number of times when I’m not able to authentically communicate my intent to others.

To that end, and at the mention in Fascinate, I read Trust Me. While structured practically into “do this and you’ll get that” holds a great deal of wisdom and challenging questions. Unlike the previous two books that I’ve read and reviewed dealing with trust (Building Trust in Business, Politics, Relationships, and Life and Trust & Betrayal in the Workplace ), Trust Me is less about one-on-one trust and more about one-to-many trust.

First among the challenging questions is which conversation people believe. Do they believe the conversation you’re having with your words? Those well thought out, well-reasoned arguments about why your solution is right may not be what they’re paying attention to. In fact, it may be all of the non-verbal cues that they’re picking up on. The book eloquently makes the point that when your non-verbal language is in conflict with your verbal language your audience (of one or one thousand) will believe your non-verbal language.

This leads us to two important questions. First, whether our words control our gestures or vice versa, and whether we make decisions emotionally or rationally.

It’s common knowledge that we gesture to support our words. However, that common knowledge may be wrong. Ekman (see Social Engineering) is known for his work on micro-expressions and teaching folks how to read what’s happening inside of the mind of another person. These expressions occur very quickly and are then quickly suppressed by our higher level brains. So it seems like we move before we form the words – or even ‘think.’ If that’s true then how can it be that our gestures are formed by our words? Research has shown that we’re always trying to rationalize our world. That we’ll come up with an excuse for something we’re doing if we don’t know why we’re doing it. Patients with split-brain disorders will rationalize their choice of words when shown two different images that don’t relate. So perhaps our words come after our feelings and after our gestures.

So, are you still certain that our gestures follow our words? I’m not, or rather I’m certain that they don’t. It is right that people look at my gestures – my body language to see how I really feel.

Gestures are one thing but surely, our reason is in control, or is it? I mentioned the split-brain disorder patients above and their propensity to explain so we know it’s certainly natural that humans will rationalize. However, who’s really in control? If you rewind to my book reviews of The Happiness Hypothesis and Switch you may realize that in the Rider-Elephant-Path model the rider only appears to have control. The rider can exert control for short periods of time but ultimately only within the limits of the emotional elephant – and only when the rational rider isn’t tired or inattentive. Coupled with the knowledge that we are fantastic rationalizers, is it so farfetched to believe that we decide emotionally that we want something and then we justify or rationalize our emotional decision? Well, that’s what Thinking, Fast and Slow seems to say. We’re slaves to our emotional (system 1) thinking.

The Nick Morgan’s point in Trust Me is not so much that we should give up well-reasoned, rational arguments – in fact he shows a framework for doing this. Instead the point appears to be that we all too often ignore the emotional conversation that’s happening in the midst of the intellectual argument. Much of the emotional context of the conversation comes from five scales on which your audience (of one or many) can be measured:

Morgan encourages that everyone practice what he calls empathetic listening. It’s also been called reflective listening. The basic premise is that everyone wants to be understood and that by restating their information – in your own words – you’ve indicated that you do understand. The in your own words is important because a tape recorder can replay he words – by changing the words you indicate that you’ve assembled it in a way that makes sense for you.

There’s a subtlety in this as well, by carefully reflecting back what they’re saying you can establish the frame for the conversation. You can slightly shift what the person said into a frame that makes the outcome that you’re looking for easier. For instance, if your spouse says that she’s displeased when you don’t place your socks in the hamper, you can respond with “I hear that you’re happy when I put my socks in the hamper.” The meaning is the same but the rephrasing takes on a positive frame – and therefore is more likely to lead to better outcomes. (Framing is also covered in Thinking, Fast and Slow.)

One of the challenges that often comes up when you begin to pay attention to the second conversations is determining the meaning behind what you’re seeing. Ekman was fond of saying that you can tell that someone is suppressing an emotion – such as anger – but you can’t reliably predict the reason. Said differently, you can determine that they had a flash of emotion and that they’re suppressing it but not the intent of the suppression. You could accuse me of something and see a flash of anger which could indicate that I feel like I’m going to get caught at something – but it could just as equally mean that I’m frustrated because I seem to be always accused of things I didn’t do.

One of the things that we do naturally is to ascribe intent to the things we observe in the world around us. If we go back to Thinking, Fast and Slow, we’re always on the watch for things that may be harmful to us. Predicting intent – no matter how poorly – is what we do. The problem is that we get this wrong so often that it’s laughable. That is it would be laughable if it weren’t so sad.

Consider a meeting of subordinates and two of them square off on an issue. One may be thinking that the other is trying to grandstand, to demonstrate how they’re better, or one-up the other. However, the intent can be completely the opposite – to prevent a respected peer from embarrassing themselves. Based on our perception, and trust, of the other person we’ll assign whichever intent we believe closely matches our expectations of them but who’s to say what the intent really is? In most cases I find that the person who was speaking rarely recognizes what their intent was themselves.

Morgan believes that there are four steps to creating authenticity and charisma. The four steps in Morgan’s plan are:

While I believe this is the right path, there’s an aspect of this that feels like “and then the magic happens.” To some extent Morgan leaves the “how” of some of these steps as exercises for the reader. This makes sense given that each of us is a unique creature and we’ve got different issues that we need to work through. However, I can see how it might be frustrating for someone looking for a recipe to realize that there isn’t a recipe as much as there’s a philosophy of cooking being covered.

While these rules are about communications in general, Morgan does have specific feedback about the verbal conversation – the rhetoric.

Morgan doesn’t ignore the written or spoken language – it’s an important part of the overall communication. Here are Morgan’s rules for persuasive rhetoric:

In some of these I feel like I do a good job – and others not-so-much. I’ve been a consultant for a very long time so I’m very focused on listening to clients and trying to reflect back their language in our communications. That’s quite directly the way that I try phrase my arguments so the listener can hear them. The more I can get into their lexicon, vernacular, or language the better.

Where I sometimes struggle is where I’m trying to shock – but not surprise. The difference here is subtle and it’s something that I remember from my comedy training. You can get a laugh by misdirection – it is the classic way to get a laugh. Make someone believe you’re going someplace and instead end up someplace else. However, there’s another way to get a laugh – a Duchenne laugh – tell a universal truth that’s undiscovered. For instance, in the SharePoint space most folks have either a governance problem – their environment is out of control – or the opposite problem they don’t have anyone using it. So when you put those two together – If you don’t have a governance problem then you must have an engagement problem – you’ll probably get a laugh because while people understand these things and it makes sense, they’ve never connected the two. The point about surprises is that any idiot can be different – the trick is be different in a meaningful way. (See Brand Is A Four Letter Word.)

Morgan also notes that intimations – not directly saying something – often have a magnetic or comedic effect. That it’s great to experience people who are able to communicate their idea without directly saying it. This is something that the misdirection of comedy teaches.

A final important point about rhetoric is about the tone of your voice as you speak. There’s two components resonance and presence. Presence is the nasal quality that makes the voice easy to be heard. Resonance is the reverberation that allows you to connect with others. By speaking at your maximum resonance point (Morgan explains how) you can more consistently connect with your audience.

Morgan’s principles for authenticity and charisma are:

Before I end, I have to share three postures that Morgan discusses in Trust Me. These postures start from a fully upright position as if the top of your head was being lifted by a string and from there small differences change the way that people will interpret your stance.

It’s been a while since I’ve watched old movies of Elvis performing but it is pretty clear that he had at least one of these postures perfected.

I want to leave this review with one final piece. That is the impact of space. How close you’re allowed to get to someone demonstrates how much they trust you and connect with you. In the diagram below (which is to scale) you’ll see different levels of closeness and connectedness based on whether you have a social, personal, or intimate relationship with the other person. It makes a difference – Trust Me. 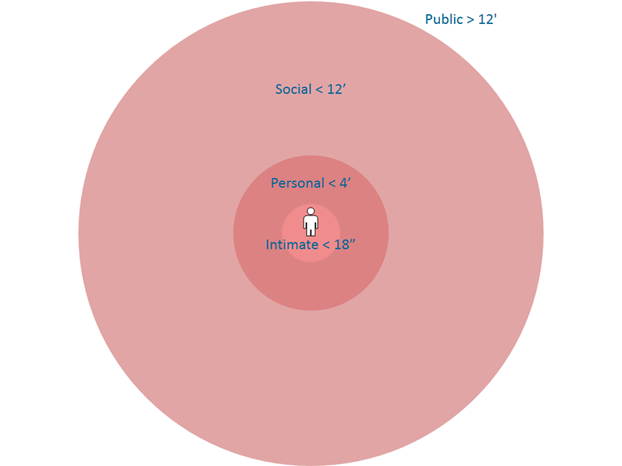